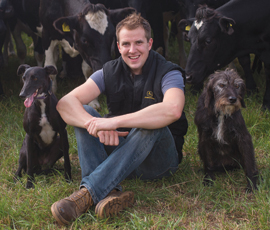 Since his first experience of milking cows at the age of 13, Nick Cavill knew he wanted to make a career for himself in farming. We look at his amazing path into the dairy career of his dream.

With no farming background Nick realised the only way to achieve his goal was to gain experience and somehow build enough capital to allow him to take on some land.

Now, at the age of 26 he has done just that, renting 121ha (300 acres) and rearing 146 dairy heifers on contract. All this has been achieved thanks, in part, to the profits from his machinery contracting business, which generates an annual turnover of about £110,000.

His determination to run his own business has been unshakable since he first started biking across the Glastonbury moors in the dark to milk for a family friend.

“When you wake up with excitement before your alarm goes off at 5.15am, you know that’s what you want to be doing,” he says.

At 13 he was milking 90 cows on his own in a six-abreast parlour at Manor Farm, Godney in Somerset – often before or after school.

“I remember receiving my first big cheque for £247 for one month’s work. At that point I knew I wanted to earn money from working with cows,” he says.

In 2000 the farm decided to sell the herd and rent out the grassland to three different farmers. At this stage, Mr Cavill went to work for another local dairy farmer doing milking and tractor work.

After three years, he then used his experience to secure his first job as a herdsman for David Cotton of Bridge Farm, Baltonsborough. In fact, it’s his experience at Bridge Farm, as well as the support of his parents and fiancée Becca Thomas, that Mr Cavill says really helped shape his career.

“David has been a massive mentor to me. He gave me every opportunity to make myself better and he’s helped make me the man I am today.”

Still living at home and earning £26,000 enabled Mr Cavill to put some savings aside. And when milking times reduced thanks to the installation of a new parlour, it freed up the middle of the day, giving him the opportunity to earn some extra money.

“I had the ambition to be my own boss, but I needed to get my hands on some land. I decided the best way to get capital was to buy some machinery and do some baling and contracting work.

“I approached David and said I wanted to buy my own tractor and do some extra work in between milking. He agreed, as long as the cows remained my priority.”

He used £8,000 of his savings to buy a P-registration tractor and £5,500 for a slurry tanker. He then started using his time in the middle of the day to do corn carting, slurry spreading and ground work. Every penny he earned was re-invested in new kit.

After just three months, he part-exchanged his first tractor and took out a hire purchase agreement for a tractor worth £21,500. “Getting a finance agreement as a 21-year-old with no credit rating was a challenge,” he says. “Everyone thought I was stupid, but I thought carefully about it and did my depreciation research on the tractor. I’ve still got it and it’s still worth £20,000.”

He was able to store machinery in a shed at Manor Farm, which meant when 8ha (21 acres) of land came up for rent on the farm, he was in a good position to take advantage.

“My aim was to rent the land, take silage off it, bale and sell it on. It was an instant income that paid for my costs and also gave me a bit of added cash. My long-term aim was to get hold of more land and build it up so I could get some cows.”

The fact the land was on peaty ground and prone to flooding meant he was able to rent it at an attractive rate of £50/acre at the time. And the farm’s location really paid off in the drought year of 2011, allowing the business to make and sell silage, when many farms were running short.

With the promise of a year’s contract for rearing beef stock for Mr Cotton, Mr Cavill then took advantage of a Catchment Sensitive Farming grant to part-fund a building. It was only at this stage he took out his first bank loan of £8,500, calculating he could pay it back within six months.

Having taken on another 13ha (34 acres) on the same farm, Mr Cavill was approached by a local dairy farmer, asking if he could rear some dairy heifers.

“Rearing heifers was never part of the plan, but I did the maths and it made sense over having my own stock,” he says.

In February 2011, he took 60 12-month-old Friesian cross Jersey heifers as part of a contract between himself and the producer. Both agreed to give each other 12 month’s notice, with Mr Cavill responsible for rent, labour and feed.

After acquiring a further 12ha (31 acres), he was then able to increase numbers to 101. Now in his second year and after taking on the whole 51ha (128 acres) farm on a Farm Business Tenancy, he runs 146 heifers and 11 bulls.

Heifers are on farm for 10 months and are out all year round to fit with the system they are being reared for. Regular weighing ensures they are on track to achieve daily live weight gains of 1kg/day with bulls run with them for three months from 1 May and stock out-wintered on kale.

Thanks to money generated by contracting work carried out in 2011, as well as £4,000 in borrowings from the bank, Mr Cavill was able to invest more than £10,000 in mains electric fencing, as well as thousands of pounds in new grass leys and a handling system. In 2012 he also began renting 40ha (100 acres) nearby, which are used to provide silage for the youngstock.

However, in 2012 he was hit with his biggest challenge to date, when 90% of the land flooded. “The ground flooded six times last year and was unusable for the whole summer,” he explains.

The horrendous year meant he made a loss on the heifers and only just started making a profit at the end of August this year. However, by ensuring he has always had an income from relief milking and foot-trimming, he has been able to spread risk during challenging times.

With business experience under his belt and the contacts and capital he has built up, Mr Cavill says he is now in a strong position to borrow money and take on another farm suitable for a dairy herd. However, he says he will remain firmly committed to rearing heifers at Manor Farm.

See more on new entrants on our young farmers page