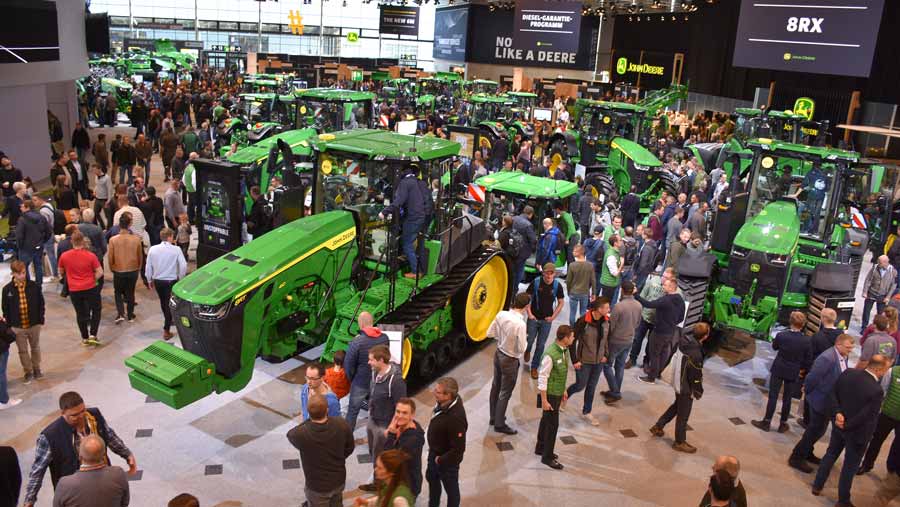 One of the major exhibitors at Agritechnica, the world’s largest machinery show, will not be attending the rescheduled event in February 2022.

John Deere has confirmed it will not be present at the show, citing bad timing as the main reason for its absence.

Agritechnica, organised by the DLG in Germany, was originally postponed from its traditional November slot in 2021 and moved to 27 February-5 March 2022, in Hanover.

John Deere had previously announced it had pulled out of the November event but has now confirmed it will not attend in February 2022 either. UK manufacturer JCB has also confirmed it is not attending.

Ralf Lenge, John Deere’s public relations manager at the company’s German headquarters, said that by February farmers would be working in the fields and attendance at Agritechnica would be down.

He said: “Considering the new fair date in spring 2022, we expect far fewer visitors from domestic and international markets, and we need to question the tremendous investment.

“In the February/March timeframe, farmers and contractors are already back working in their fields. We expect that many buying decisions for the 2022 season have been taken already.”

This is not news the organisers wanted to hear, as John Deere is one of the show’s biggest supporters in terms of show presence and, of course, revenue generated by exhibition space.

However, Mr Lenge did go on to say John Deere would be present at other events, such as the DLG Field Days in June 2022, the Eurotier Show in November 2022 and the next Agritechnica in November 2023.