While robots and drones flooded the show and you couldn’t move more than 30ft without being assaulted by banners declaring the future of AgriTech and automation, there were a few modest stands with some pretty clever kit that’s ready to go right now. 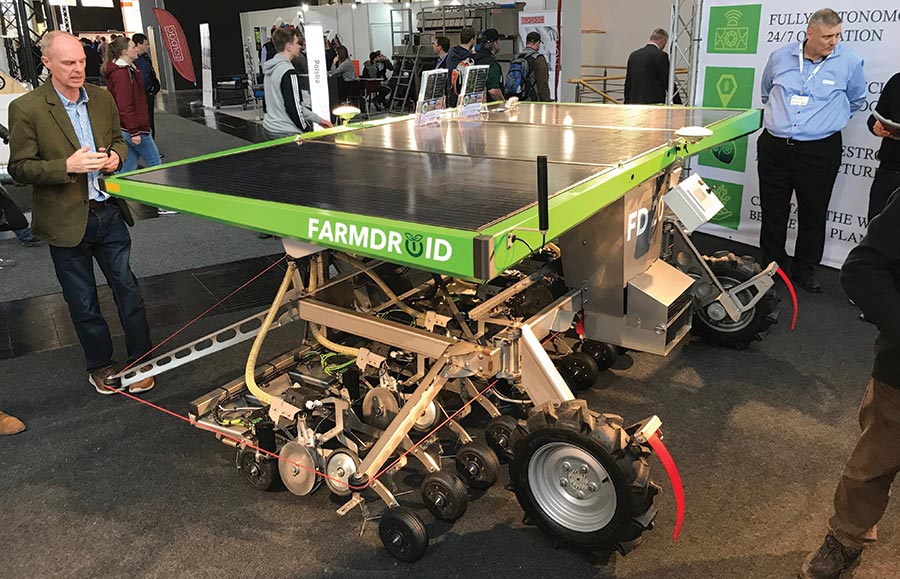 There are currently 12 of these clever machines out working in the field and the firm’s order books are full.

Between these are fine, shallow shares to slice off weeds between the rows, and to deal with undesirables in the crop, there are solenoid-operated knives that swipe in and out between the plants to keep things clear.

What is clever about the machine is its simplicity – there aren’t arrays of different sensors to distinguish between weeds and crop.

Instead, the FarmDroid makes a note of where the seeds are sown on its initial drilling run and then remembers those positions for each subsequent weeding pass.

For guidance, it uses a conventional RTK-corrected Swift GPS system for sub-2cm accuracy.

Typically employed in row crops such as sugar beet, the machine is capable of looking after 30-40ha, making weeding passes every week or so.

While the Droid’s two small batteries and full-width solar panel can generally keep it going for 20 hours a day in the growing season, it’s possible to give it an extra boost as required by plugging it into a conventional, single-phase, 240-volt supply.

At present, the machine is only set up to drill small seed crops, but there are plans afoot to develop a version suitable for maize.

Currently, organic users are the biggest customers, but the brothers say they can see it appealing to more mainstream growers looking to reduce their agrochemical dependence, with precision fertiliser applicators as well as spot sprayers in the pipeline, too. 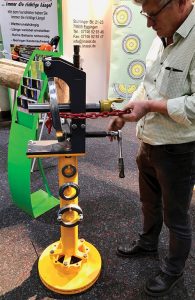 Anyone who spends a lot of time repairing pto UJs will know the misery of getting long-wedded shafts and yokes to part company.

German machinery dealer and engineer Werner Muller has come up with a device to deal with the problem.

The Shaft Master clamps the tube and a collar is inserted behind the cast flange of the UJ.

The operator then uses a standard 12.7mm (half inch) ratchet to turn a coarse-threaded bar that gently forces the yoke off the shaft.

Re-fitting is done in a similar manner using a pair of chains to pull the UJ squarely back on to the tube. 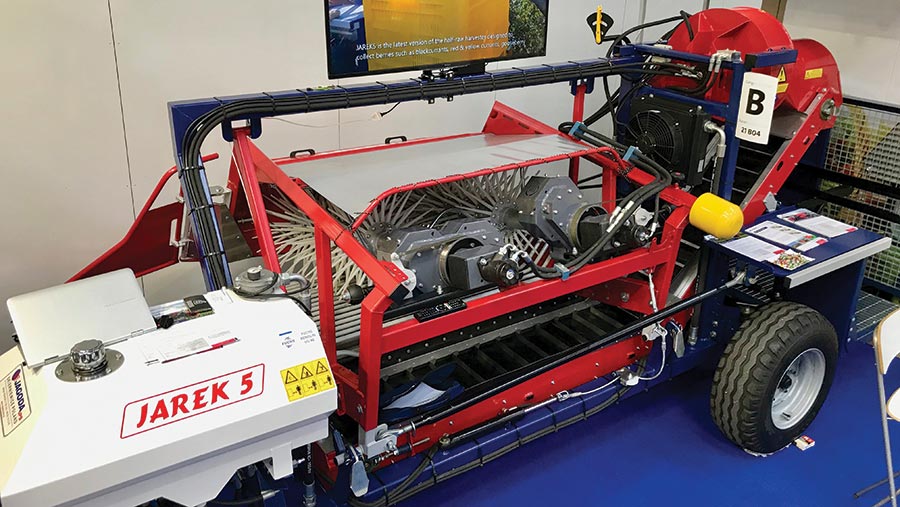 Tractor-mounted or self-propelled, they use angled guards to gently bend the bushes sideways over a rubber conveyor.

Plastic finger-wheels then rake through the branches to pluck the fruit from the plants.

Inevitably, the crop is contaminated with leaves and small twigs so a powerful, hydraulically driven turbine fan at the top of the conveyor blows all the debris off before the berries land in trays on the rear load platform. 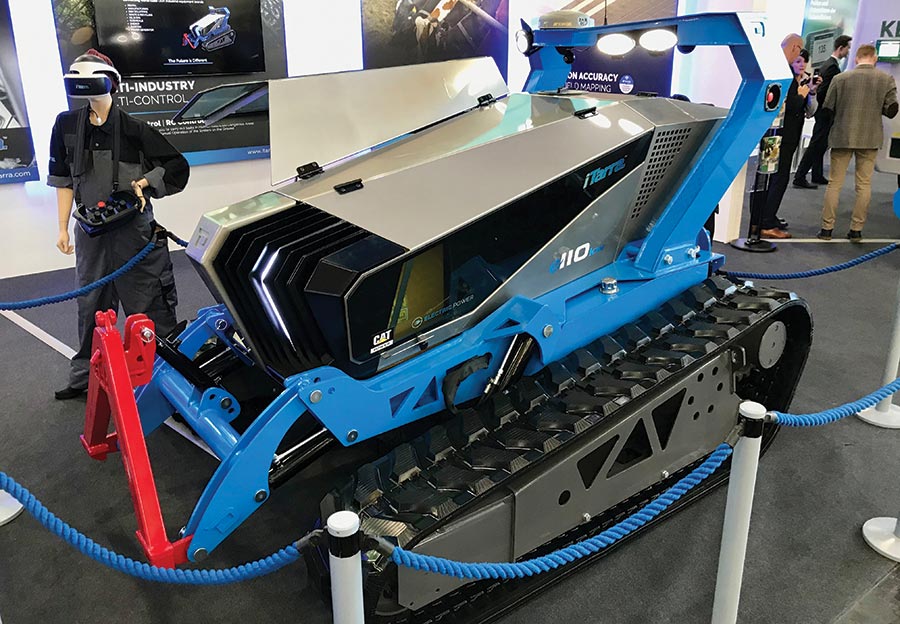 At a show like Agritechnica, crammed with “concepts”, it takes a discerning eye to spot just what might make it through to reality in the next few years, and Irish inventor David Doran hopes he’s not far off with his iTarra tracked robot.

A multipurpose tool that should be capable of aiding in dangerous remote applications, such as demolition and mining, its agri opportunities could be wide reaching, covering anything from mundane, repetitive fieldwork tasks to repetitive work such as yard scraping or running a feeder wagon.

At its core is a Caterpillar diesel genset capable of pumping out 110kW as well providing the track units with hydrostatic drive.

It can be operated in one of three ways: remotely with the operator in line of sight; via virtual reality googles and 360deg camera; or completely autonomously with TopCon GPS guidance, radar and laser Lidar proximity sensors.

The machine itself has a couple of novel features, the first being its multi-axis hitch.

Unlike anything currently in circulation, the iTarra has a four-sided coupling that locks into a similarly shaped cup on the implement.

Capable of swivelling and twisting through three dimensions, this box-section drawbar completely encloses the pto shaft, doing away with any safety issues.

But power doesn’t have to be transmitted mechanically – there’s also a 500kW electrical socket for equipment of the future.

Its other innovative attribute is what’s tagged “adaptive load and traction technology”.

Designed to avoid surface scuffing when turning, the skid-steer machine will lift the front of its track units when changing direction so that the contact point with the ground is reduced and delicate surfaces aren’t damaged.

Currently, the prototype is undergoing testing with the backing of certain big players such as Keenan/Alltech, and it’s hoped production will start by spring next year. 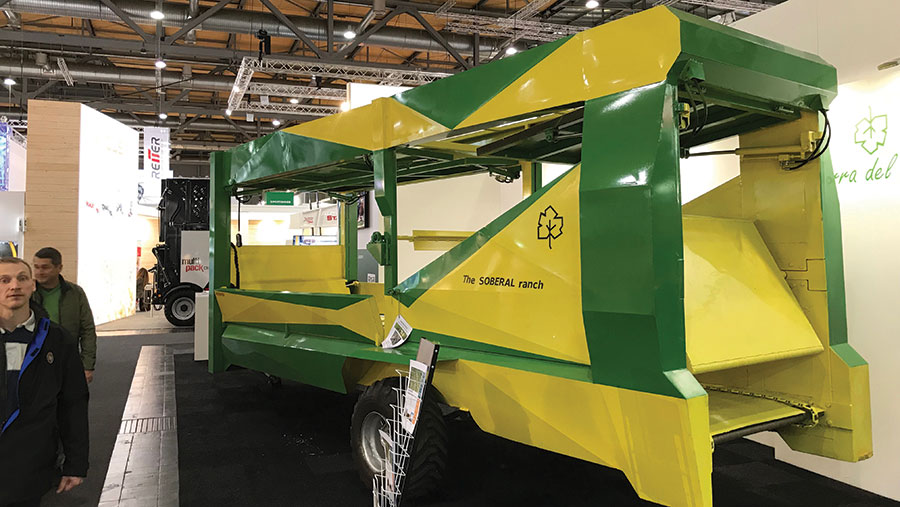 Distributing forage to outwintered livestock is rarely a pleasant task, but this bale feeder could provide a possible alternative.

Developed by the workforce at one of Spain’s best-known Charolais breeding businesses, the Soberal Ranch fodder distributor will handle round or square bales.

With a chain-and-slat floor, the double-decker trailer uses simple, hydraulically-driven paddles to tease out material and dispense it on the ground in its wake.

Once the bottom layer has been fed out, rams on the upper deck open it up so that the top bales drop down on to the walking floor to be broken up by the rear beater.

Key advantages of the machine are said to be that because fodder is spread out across the whole field, there are no issues with bullying, and manure/poaching is evenly distributed across the acreage rather than being concentrated around feeders. 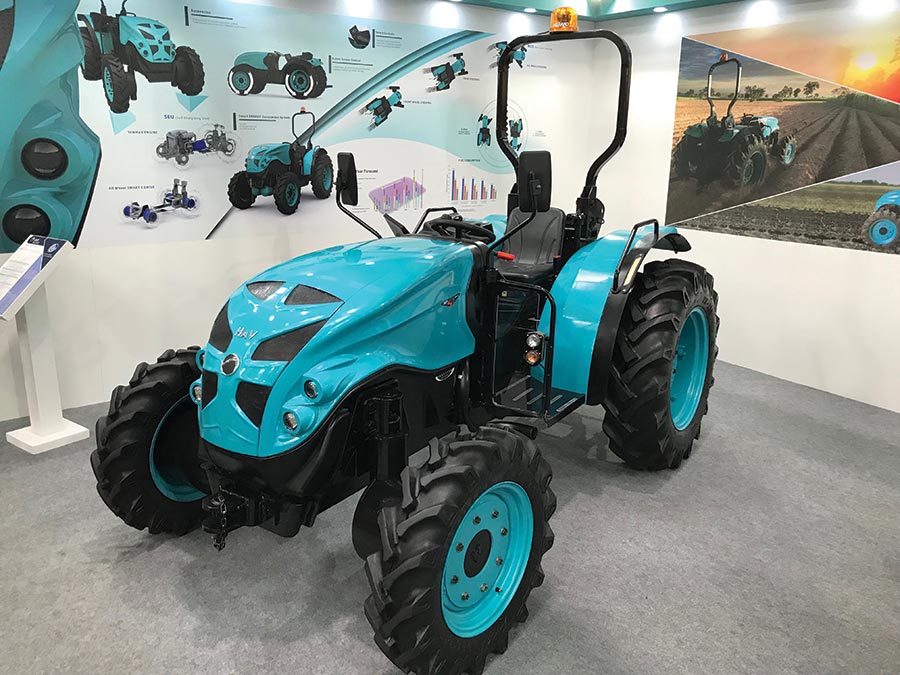 One of the more interesting developments at the show was the Proxecto hybrid agri vehicle (HAV), with its bug-eye lights and turquoise colour-scheme, it looks much like any other small tractor from south-east Asia or the Indian sub-continent – there are plenty spread through the Hannover halls.

But nothing about the HAV is conventional.

It has no clutch, no gearbox, no transmission and no axles.

The only regular thing about it is the 40hp internal combustion engine under the hood, but even that can be diesel or natural gas powered.

Either way, the Yanmar block powers a 40kVA generator.

This provides electrical power for the wheels, pto and any implements.

Ground drive comes from a 12hp electric motor contained within each hub, with a hydraulic pump for each one that provides an oil supply for the steering and suspension on each corner.

Not being constrained by conventional tractor design has given the Indian engineering team the chance to explore options that wouldn’t be possible with a mechanical driveline.

Without axles, the hubs are connected to the body of the tractor via elongated king-pins, which in turn means four-wheel steering is possible and, by adding hydraulic rams into the king-pins, each wheel gets simple, hydro-pneumatic suspension.

Integrated into the big alternator/generator is a separate hydraulic power pack, which provides oil flow for the linkage and external hydraulics.

When it comes to the pto, buyers can either opt to have a beefy electric motor in the usual place you’d expect it or have it mounted on the implement itself, supplied via a socket on the rear of the tractor.

This same socket is the key feature of the HAV that has the potential to revolutionise rural life in developing countries.

Once the working day is done, the tractor can be parked up and used as a standalone genset, providing power and light to homes that would otherwise go without.

It is also hoped that it could significantly help to reduce energy usage in farming.

Because the engine is not powering a direct mechanical driveline, but running through the alternator instead, the loading is much more stable.

With different operating modes selected via the weather-proof touchscreen, sensors in the wheel motors and electric pto motor detect power requirements and alter engine speed to increase or reduce electrical output as required.

The company says this means up to a 30% reduction in diesel consumption.

Switch to a CNG-fuelled motor and the saving could be as much as 50-60%.

Without torque peaks, this steadier loading is kinder on the engine, with the result that service intervals could be extended beyond 1,000-hours.

That is an area Yanmar is currently looking into.

Currently, the engines used comply with stage 3 emissions rules so can’t be sold in Europe.

However, there are plans in place to offer the latest stage 5 compliant motors and to put the HAV tractor through European Type approval, adding 50hp and 75hp variants to appeal to small and mid-scale farming businesses.

One of the refreshing things about this little tractor is the realistic approach to pricing and its simplified the design, and keeping production in-house has helped lower costs.

Larger, emissions-compliant, CE-approved versions are hoped to land on European shores in 2021-22. 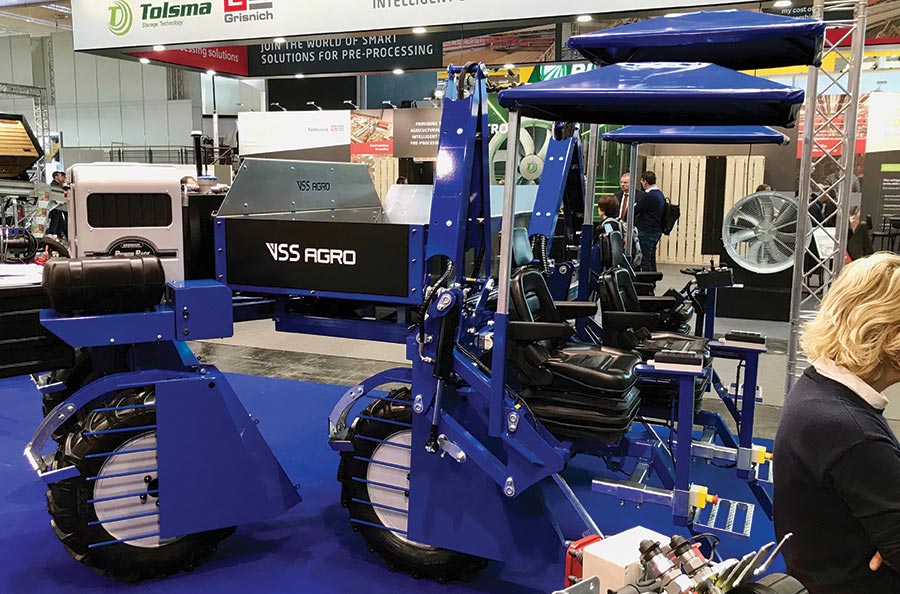 You could be mistaken for thinking this might be the first manned Mars rover but it’s actually something much more down-to-earth.

Designed to carry three people plucking out unwanted plants in potato crops, it has a telescopic beam that extends the outer two seats to a 4.5m working width.

That means three people can cover up to 12 rows of spuds – a job that would usually take a very long time on foot.

And, being elevated, the roguers have a much better vantage point to spot any undesirables.

As they work, the team throw volunteer weeds into a hopper behind the seats and this is then tipped hydraulically on the headlands.

Power is provided by a 28hp Gemini diesel engine driving a hydrostatic transmission.

The chassis is articulated to make the wheels true tracking when turning on the headlands. 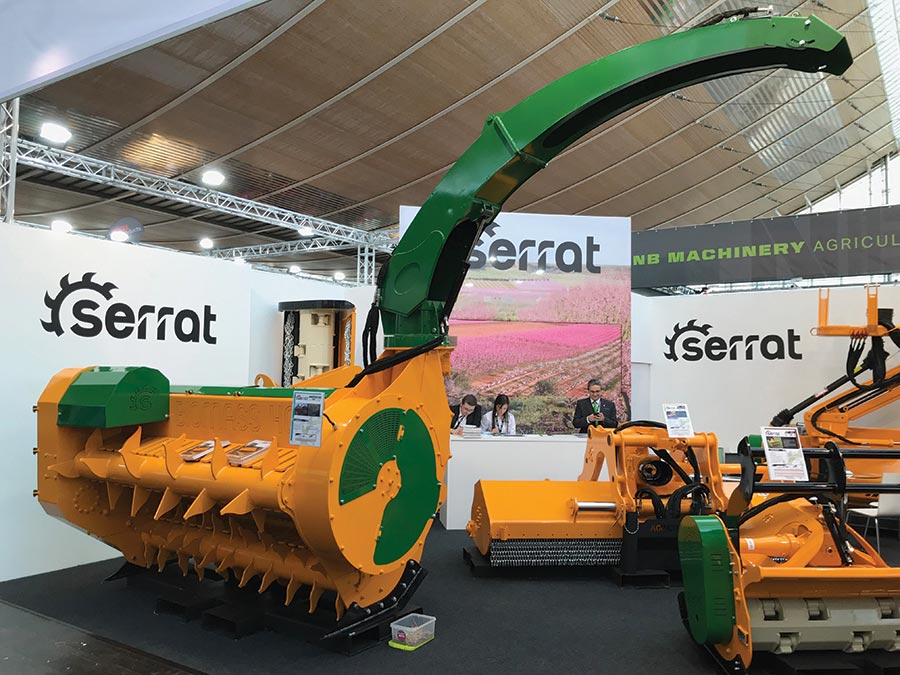 This hefty mulcher is designed to chomp its way through prunings and branches up to 25cm in diameter, shredding them and blowing them into a trailer for use as a biomass heat source.

Two rigid-tined rotors lift material off the deck and feed it into a high-speed toothed drum, which draws the wood through a seriously heavy-duty comb, shredding it as it goes.

The optional turbine blower then blasts it up the spout and into a trailer alongside.

Power requirement for the 2.25m version is about 300hp, ideally on a tractor with reverse-drive capability.

It is a torque-hungry beast, so to get things spinning and avoid burned-out pto clutch-packs, there’s a hydraulic start-up assister motor.

A smaller, simpler version for less meaty growth only needs 90hp up front. 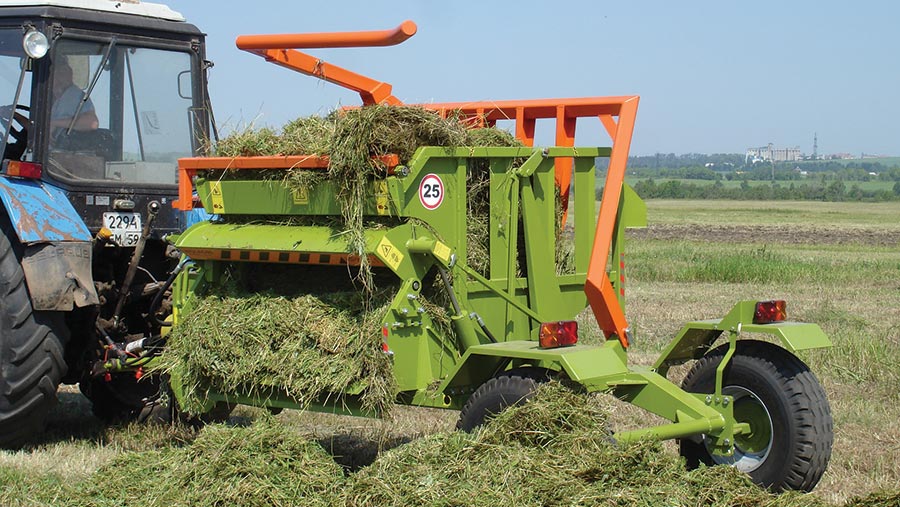 Reckoned to be number one in Russia for round balers and handling kit, KRMZ has taken bale tech to a whole new level with a cloud-based telematics package.

Fitted to either a tube wrapper or the company’s self-loading bale chopper, the system can be used to monitor bale quality, DM and weight as material is either packaged up or fed out.

The bale chopper itself employs an unusual design.

It has a wrapper-style loading arm to hoist bales on to its cradle.

Rather than using a roller or belt bed to unroll material, racks of serrated teeth are employed to ratchet the bale through a hydraulic guillotine that chops forage to the required length.

The Russian firm is currently on the lookout for European distributors. 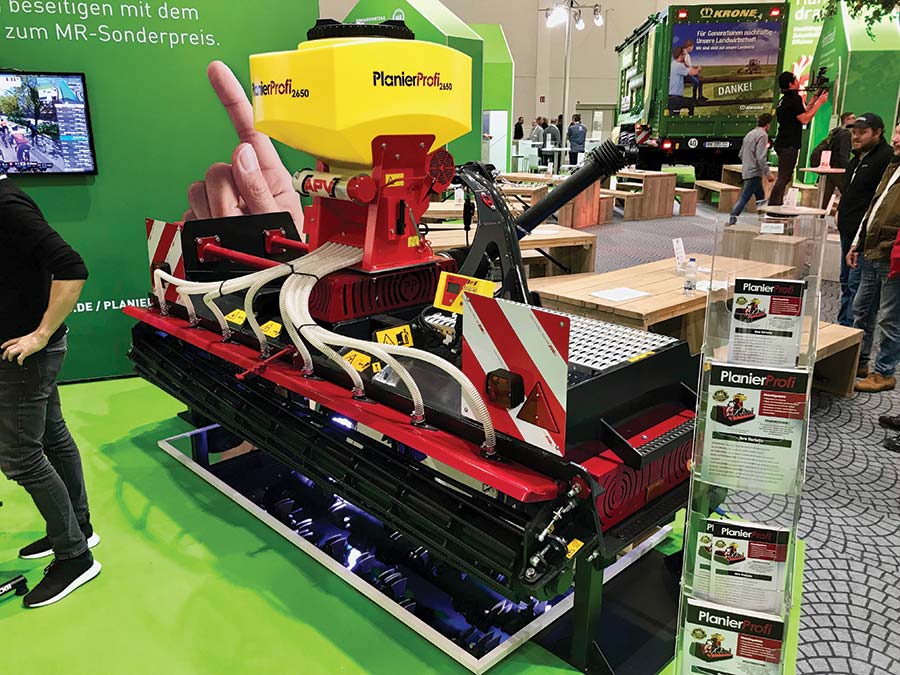 A new approach to pasture re-seeds was on show from German firm Craco with its Planier Profi machine, which is essentially a double-rotor flail topper with two sets of counter-rotating vertical swinging blades to mulch up vegetation and work into the soil about 2-4cm to produce a shallow tilth.

An APV applicator unit then meters out seed and blows it through the rear cage roller, which carries it down into the ground and presses it in to ensure decent seed-to-soil contact.

The machine was originally developed for grassland farmers in areas of Europe where wild boar damage is a serious issue – its levelling effect crucial in making good of rooted-up swards.

However, Craco reports that it is now seeing increasing number of farmers, green-keepers and municipalities using the Planier Profi for complete re-seeds.

It needs about 120hp up front, while the smaller 2.25m version drops that to about 90hp.