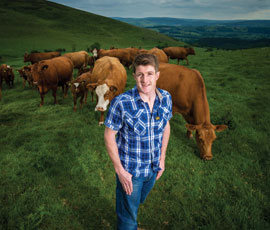 James Evans is on a quest to develop a sustainable and profitable livestock system that suits the land he farms, requires minimal labour and works hand-in-glove with the environment.

To that end he questions every facet of the beef – and sheep – enterprises he manages on this mixed family business run in partnership with his father and brother in Shropshire.

What marked James out as a winner is his ability to seek out ideas and information, analyse every detail, and embrace new technology and processes to drive herd profitability up. He has changed his cattle breed, adopted pedigree-recording and TMR-feeding, as well as embraced environmental management.

As a member of the NFU Next Generation Policy Forum and, as part of the EBLEX Progressive Beef Group, he is very much at the forefront of the sector, working for the future of young producers in the industry.

For James, signing up to a contract farm agreement with an ex-accountant was a big turning point for the business. It forced him to focus his attention on costs of production and completely reassess his production system.

“Nothing focuses the mind more than having to constantly prove what you are doing is profitable and works in terms of facts and figures,” he says.

He had been crossing Limousin cross Holstein heifers to continental bulls to produce high-value store cattle. Although they were achieving good prices, the cost of production made it unprofitable.

“Rather than focusing on the end product, I needed to concentrate on the most important thing – herd profitability. And that meant getting cows in-calf and producing a low birth weight calf that needed no assistance,” he explains.

It was on a study trip to Cumbria four years ago that James had what he describes as a “eureka” moment when seeing the benefits of using Stabilisers. In 2007 he bought his first bull.

“James has an excellent grasp of technical issues and the challenges surrounding beef production, and he is a great example of someone putting science into practice”
Simon Marsh Harper Adams University College

After seeing his management difficulties disappear he decided to move everything over to Stabiliser. The business now has two herds over two units – a 160-cow spring-calving herd at Partridge Farm and a 90-cow autumn-calving herd at Walcot Farm.

“We’re now getting more cows in calf and rearing more calves, so although individual value may be reduced, the profitability of the business has gone up,” he says.

James is selling quality breeding heifers into the Stabiliser pyramid, all produced off a forage-based system. Steers are sold at 12 months. Males in the top 10% EBVs for the breed are also left entire and sold at 14 months as breeding bulls – creating an added income stream.

The whole herd is performance-recorded and heifers and bulls are selected on their Maternal Production Values.

At the same time, James is taking advantage of environmental schemes such as Back to Purple, restoring heather to the hills, while doing all he can within constraints to improve and get the most from grassland.

“James’ ability to create opportunities through collaborative working, together with his enthusiasm and attention to detail, makes him a truly progressive farmer.”
Brian Mullens, senior vice-president

Neil Rowe
Manor Farm, Abingdon, Oxfordshire
Neil has transferred his knowledge of high-performance dairying into beef production. In doing so, he has not only designed a pioneering new building, but produced an innovative, yet simple, beef system for his 150 cows.

Robert Parker
Drumdow, Ervie, Stranraer
If ever there’s an ambassador for the native breeds, and specifically the attributes of the Black Baldie, then Robert is it. His simple, low-input system is focused on getting the most from his farm by breeding 180 easy-care cows.