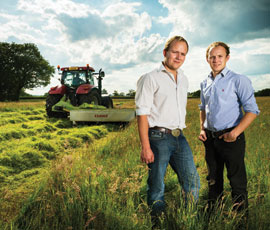 In just six years of trading, Jack and Bay Watson have built up a profitable, well-managed farm contracting business with a growing base of satisfied customers.

This, along with the pair’s sharp eye on costs, ambitious plans for the future and unrelenting drive to succeed, has marked them out as winners of the 2012 Farmers Weekly Contractor of the Year award.

After their father passed away in 2006, Jack and Bay, aged just 17 at the time, decided they would continue running the small contacting business he had set up near Studley, Warwickshire.

Starting with one Case IH 956 tractor and an ageing baler and wrapper, it was a difficult beginning, says Bay. “We had to just sit tight and weather the storm. That kit was the making of us, but it was nearly the end of us.”

But since then they have built up a profitable business that has the potential to keep growing. They are running a fleet of modern equipment, operating from an impressive yard and have more than 100 loyal customers.

“We never poach work and we’re not the cheapest, but we pick up new clients every year because of it. We always arrive on time and do the job to the highest possible standard.”

Another of the brothers’ greatest business attributes is their keen eye on costs. “Every January we sit down and look out how much each of our services is making,” says Jack.

This exercise takes account of depreciation, labour, repairs and maintenance, fuel, and sundries such as baler string. “For example, we used to do a lot of round baling, but we just couldn’t get the figures to stack up,” he says.

By carefully managing the growth of their business, Jack and Bay have also managed to limit risk and avoid getting into financial difficulty. For example, larger machines are purchased on finance, but smaller items are bought outright to avoid the business having too many financial commitments.

They also won’t invest in equipment if they can’t see a clear profit. “We’ve already been approached to contract-farm a small amount of ground, but we’re not geared up for it yet and the amount of land doesn’t warrant the investment,” says Jack.

But as the business grows and they have more equipment they hope to be able to justify taking on these agreements.

“These brothers have established a significant customer base, a growing range of services and a profitable business. They have passion, drive, commitment and a very bright future. They should be an inspiration to other young people starting out in agriculture”
Philip Wynn Wynn Business Partnerships

“We are in it for the longhaul and excited about growing the business,” says Jack. “We’re always looking for opportunities to increase turnover and profit, but never at the expense of providing a good service.”

Jack and Bay also realise the importance of working closely with the local community. They support the Pony Club and Point to Point, either through sponsorship or helping with events. Bay is the youngest member of the local Young Farmers club committee and Jack is the treasurer.

The twins also recognise the importance of proper training and have teamed up with the local agricultural training group to run safety courses in their yard.

“This prestigious award showcases the dedication of these finalists, each one challenging themselves to increase their professionalism and customer satisfaction.”
Steve Smith, UK & Ireland sales manager

Paul’s 50-year-old specialist drainage business has stood the test of time. Computerised plans, recycled backfill and GPS on its machinery are just some of the developments that have helped the business keep ahead.

Oliver is a perfectionist who has grown a very significant, diverse and successful business with more than 300 customers in East Anglia. A recent biogas venture has provided him with a magnificent springboard for the future.