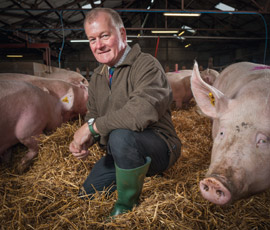 They say necessity is the mother of invention and so it proved for Gordon McKen when Scottish (formerly Grampian) Pig Producers Ltd was founded in 1979 following the collapse of meat processor Lawsons of Dyce.

“We started out of a crisis,” he says. “We lost some 50% of Scotland’s pig slaughtering and processing capacity, so we got together a few farmers to form a marketing group.”

Gordon is “Mr Organisation”. Achieving a turnover of £53m and payment terms to his members of 48 hours, despite the factories paying SPP on one week to 21 days, is no mean feat. That and budgeting successfully to run essentially not-for-profit demonstrate not only his organisation skills but also attention to detail.

Then there’s the fact he’s grown the membership from a handful of producers to 130, including members in Northern Ireland who have been attracted to his practical and pragmatic approach and – no doubt – his unrelenting commitment to the cause.

But the truth is that Gordon is more than just the man running SPP. Although a much-valued sounding board for his farmer members he is also an active stakeholder in a number of key organisations and government initiatives – farm assurance, grants for buildings to improve efficiency, the Pig Ongoers Scheme, liaising with other producer groups to look at supply chain issues, and encouraging his members to become involved in benchmarking.

There can be few in Scotland and possibly in the UK who can match Gordon’s knowledge of the pig sector or his enthusiasm for it.

That’s what makes him a winner.

Understanding what his members need, and having the tenacity to drive the business forward for their benefit enables him to deliver real value in three key areas.

First, by removing all the logistical and marketing hassle.

Second, by co-ordinating the output of 130 members, Gordon is able to get the right pigs of the right spec into the right factory and in so doing is able to negotiate premium contracts.

“Gordon’s direct influence on the fortunes of pig producers throughout Scotland and Northern Ireland through his dedication, organisation and ability to react to challenges quickly, marks him out as a much deserved winner in this category”
Andrew Janaway Farmer, Hampshire

Third, by providing members with quality feedback, either on the market and individual farm prices and grades, or disease monitoring information through Wholesome Pigs (funded by farmer members of SPP and Quality Meat Scotland).

It all wraps up into a highly dependable service on which many pig business depend.Gordon has an eye to the future too. “The next few months will be crucial for the UK with the rest of Europe banning stalls and tethers from 1 January,” he says.

“There are debates going on around trying to secure a new British premium but I don’t see that as helpful. It’s better to produce on the basis of where we can compete.”

“To win in such a high-class field means Gordon is a high achiever. He has put himself at the heart of a great number of farming enterprises – truly the definition of a winning adviser.”
Ian Leach, regional director

With a 40-year career at the former Milk Marketing Board – now Promar – there’s not much Derek doesn’t know about dairy farming. Few could better his knowledge of the sector, and many have benefited from it

Peter is one of the UK’s key influencers to get conservation truly on the map. With an ability to understand his clients’ needs and a vast knowledge of on-farm conservation, he provides solutions in a practical and personable way.