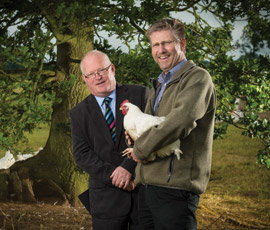 From 12 bronze turkeys for Christmas in 1987 to a business now processing 50,000 chickens a week and employing more than 100 staff, Traditional Norfolk Poultry is a company that shouts to be noticed.

It was set up by friends Mark Gorton and David Garner, a pair with no experience whatsoever of poultry farming. But they set about growing their business with careful planning, an emphasis on welfare and, of course, sheer hard work.

“We were one of the pioneers of organic poultry and have been growing them for nearly 20 years,” says Mark, who believes that one of the keys to success is thinking like a consumer.

“From the start we were growing our poultry the way we thought was right – free-range, with lots of light, perches and environmental enrichments, things that at the time were unheard of.

“Giving our customers what they want is crucial,” he adds. “They are paying pretty much double for our products, so it is essential we do things the way they would expect them to be done.”

This means farming with a social and environmental conscience, doing things such as hosting farm visits, giving talks and planting trees.

TNP is also actively involved in charity work, making donations of fresh turkeys to local hospices and night shelters, and helping raise funds for an orphan education charity in Zimbabwe.

Another important key to success is the company’s willingness to innovate, says David. In 2007 they started offering rare-breed turkeys, and they are forever developing new products for leading supermarkets and brands.

They have also experimented with different rations, trialling a range of herbs, garlic and even milk powder to see the effect they had on flavour.

The most recent innovation, however, has been the launch of a new breed and product altogether – the Norfolk Black chicken.

“We have been producing Norfolk Black turkeys for the past six or seven years, and have seen that business really take off, so we thought ‘Wouldn’t it be great to have a Norfolk Black chicken?'” explains Mark.

“Mark and David are clear winners in this category, having driven their business forward through a combination of hard work, customer awareness and product innovation. They also put a great deal back into their local community.”
Jason Gittins, senior consultant, ADAS

“The bird has been carefully bred to give the right visual appearance, but, more importantly, the right taste.”

Having developed the genetic cross and conducted trials with different production systems and rations, the company has now established three of its own breeding flocks. Its first commercial flock has just been slaughtered and the chicken supplied to Sainsbury’s on an exclusive basis, aimed at the premium end of the market.

Today, TNP operates 35 farms – about half under direct control and the other half with contract rearers – and has its own state-of-the-art factory at Shropham, processing some 2,500 chickens an hour, or up to 1,000 turkeys in the run-up to Christmas.

Never ones to stand still, Mark and David are committed to further expansion, with the aim of doubling their chicken throughput in the next two years.

“NatWest has been supporting UK agriculture for more than 200 years and, following my visits to the finalists’ farms, I continue to be encouraged by their enthusiasm and innovation.”
Ian BurrowHead of agriculture

Working smarter, not harder, is the ethos of commercial broiler producer Ian, who has developed state-of-the-art sheds for maximum efficiency and welfare for his 80,000 birds. He also works as a consultant in Ukraine.

Gordon has built up a profitable organic egg business from scratch, developing his own brand to capture a premium price. He also uses social media to raise his profile in the local market, which includes hotels, butchers and delis.