The Farmers Weekly Awards celebrate the very best of British farming by recognising and rewarding innovation, hard work and passion for agriculture.

Farming in difficult conditions, bottling their own milk, and managing units across county lines, this year’s Dairy Farmer of the Year finalists are top examples of the resilience, ambition and innovative thinking found in UK dairy farming. 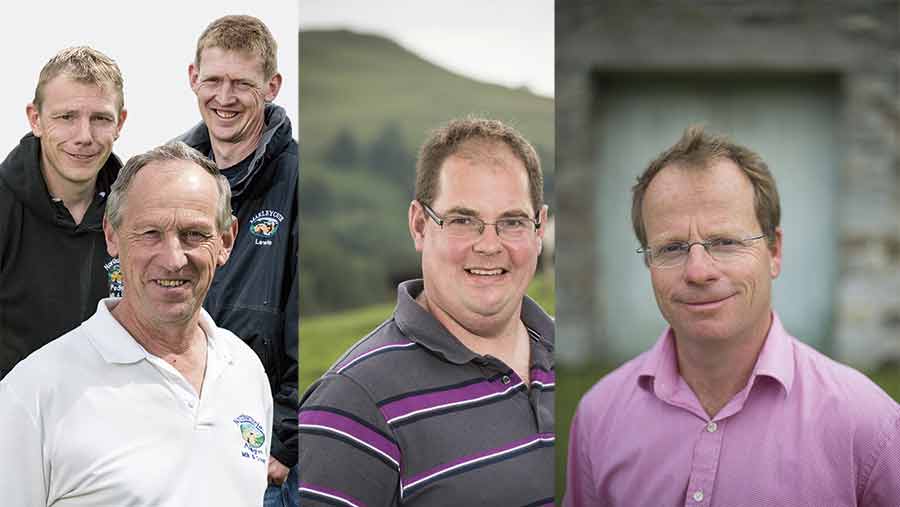 See also: Read about all our Farmers Weekly Awards finalist

In less than two decades, Geoff Sayers’ Devon dairy business has grown from a single farm with 300 cows to a 10m-litre organic milk empire.

It all started in 1998 when, after a career in finance in Hong Kong, Geoff returned to Carswell Farm, near Plymouth, Devon, established by his father in the 1950s.

He soon began converting land to organic and expanding. 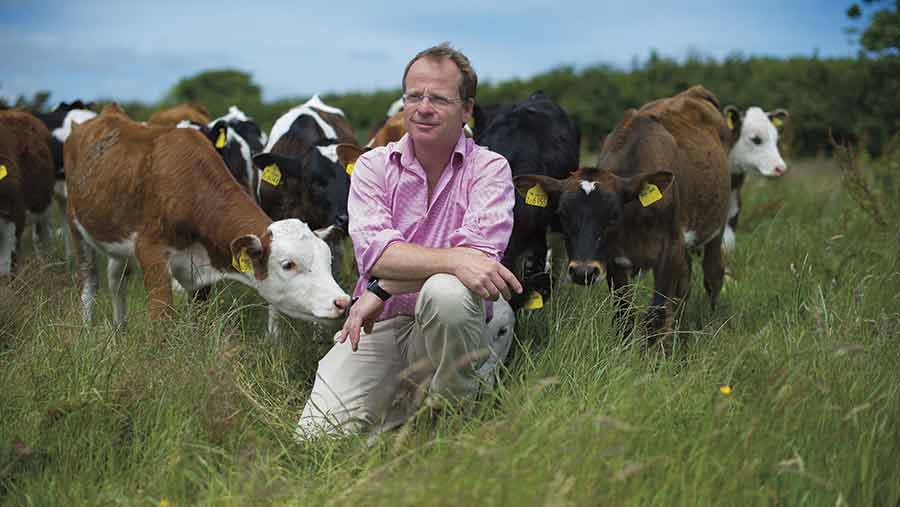 Now, as CEO of the Carswell Group, Geoff Sayers oversees the management of 1,900 cows across 1,602ha of converted organic land.

About 10m litres of organic milk is produced each year on five farms across the West Country:

Of the 10m litres produced across the five sites, the majority is sold to Arla Foods.

However, dairy remains the company’s bread and butter, with milk sales and the Holy Cow brand accounting for about two-thirds of total revenue.

“It is more expensive [about 2p/litre difference in cost of production] to produce autumn milk, but if you have a good silage-making season you come away with a reasonable autumn milk.

Around 95% of milk sold to Arla Foods

Cows graze for at least nine months of the year. During the winter, they’re housed and subsist largely on a diet of silage.

Milk production varies from herd to herd, with autumn-calving Gilscott Farm in North Devon boasting the highest yielders at 6,370 litres a cow, of which 3,499 litres came from forage.

Split-calving Hole Farm in Cornwall follows closely at 6,022 litres a cow, with 4,027 litres from forage.

Cost of production across the five farms averages at around 28p/litre, which Geoff acknowledges is “probably too high with rent and finance.” Despite this, they’ve averaged around 15p/litre gross profit the past two years, he says.

Across all five units, the main focus is improving cow fertility and producing more milk from forage to drive down the admittedly high cost of production.

Management of each of dairy units is delegated to a farm manager.

On top of their salary, those tasked with managing Geoff’s owned and rented farms are incentivised with a 5% share of any profit from their unit.

What the judges likes

Clear understanding of all aspects of costs

Each herd managers is also expected to meet a series of targets set by Geoff.

Areas of focus include milk quality, cow mortality, and calf mortality. Managers are also expected to have 75% of heifers calved in the first three weeks of the calving block, and 75% of cows in the first six weeks.

“Managing the remote sites is probably the biggest challenge,” says Geoff. “It used to fill me with dread because if something happens in north Devon, what do you do?

“We’ve spent an enormous amount of time and money on people development,” he says.

“We profile individuals, and every week we monitor stock production. It’s about monitoring, measuring and making sure you’ve got the right people.”

Looking ahead, Geoff hopes to double milk production across his units.

He also plans to develop and market new products under the Holy Cow brand.

“At the moment, we’ve got four product lines. Hopefully, Waitrose will continue to love us, and give us more products over time.”

“I think there is potentially an export market [for Holy Cow products],” he adds.

In 2005, with milk prices mirroring those of today, David Baynes and his sons Richard and Paul decided to cut out the middle-man and begin bottling their own milk – and they haven’t looked back.

More than a decade on, half of the one million litres produced at Marley Cote Walls Farm in Hexham, Northumberland, by their herd of 90 Shorthorns and 60 Ayrshires is processed on site. 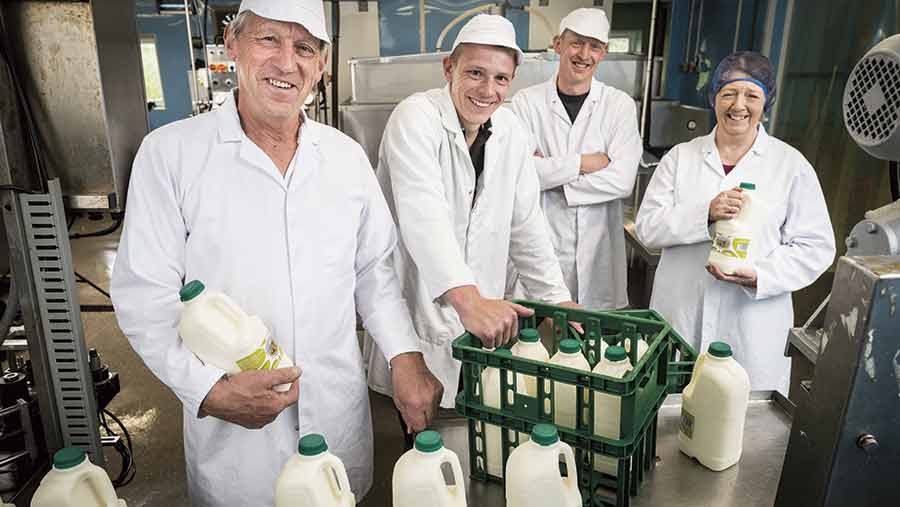 “Eleven or 12 years ago, yet again, the price of milk was on the bottom,” says David, who took over the running of the family farm with his wife Shirley in 1975. “I think we spent a couple of nights on a picket line in deepest Yorkshire – that was the point we went over to the milk bottling side.”

Resulting whole, semi-skimmed and skimmed milk and single, double and whipping cream is sold to more than 100 customers, including shops, cafes and restaurants, across the North East at a premium – about £1.20 for a two-litre bottle of milk – under the family’s Northumbrian Pedigree brand.

Cost of production, not including depreciation, is around 21.5p/litre, with milk bought by the processing business for 18p/litre.

Minus running costs and other outgoings, including van costs, wages, and power, they come away with a gross margin of about 13p for each litre sold under the Northumbrian Pedigree brand.

The Baynes produce just enough to supply the minimum required by their processor First Milk and meet the demands of the on-site processing business, which is managed by David’s youngest son, Paul.

To mirror the demands of the processing business, the Baynes calve year round, with an interval of 399 days. Calves are raised nearby at Woodnook.

“Current wisdom is that block calving is the most economical way to manage cows,” says David.

“We have demand for milk right through the year – maybe plus or minus 10% per season. That’s why we have an all-year calving pattern – for the demands of the bottling plant,” he adds.

There is a focus on quality over yield at Marley Cote Walls Farm. Production averages at 8,376 litres, of which 3,620 litres are from forage, while fat and protein typically stand at 4.2% and 3.4% respectively.

Cost of production below average

Marketing nearly half of milk at a premium

Positive interaction with the public

“It makes a big difference when Paul turns his separator on,” says Richard.

Prior to them building the shed, Richard travelled to the Netherlands in search of inspiration on design and robotics.

“Top of our list was cow comfort and welfare,” says Richard. “Happy cows are profitable cows.”

“We made the passages a little wider than they needed to be, and we did about as many miles looking at cubicle beds as we did sheds.”

CCTV was also installed in the shed, allowing Richard to monitor expecting cows during the night through his smartphone.

Cows are milked on average three times a day by two Lely A3 robots.

Since the robots were installed, milk production has increased approximately 10%, quality has increased, antibiotics use is down, and mastitis is all but eliminated – putting the herd in the top 5% for mastitis.

The Baynes process three days a week, pasteurising – but not homogenising – milk in a 900 litre/hour tank.

Products are delivered six days a week in two refrigerated vans, with David and Paul ensuring they deliver on at least four of those days to maintain the connection between themselves and their customers

Hoping to build on the reputation of the Northumbrian Pedigree brand, Paul is trialling three varieties of fruit-flavoured drinking yogurt produced in a 50-litre vat on the farm.

Using experience gleaned working on farms in New Zealand, Mark Verity has overcome the unforgiving weather and altitude of his East Lancashire dairy farm to turn a profit.

Mark manages 375 predominantly Holstein dairy cows, 115 heifers, 110 heifers under 12 months, and 100 beef cattle on 283ha over two farms near Clitheroe, Lancashire, in partnership with his parents, Stuart and Kathleen. 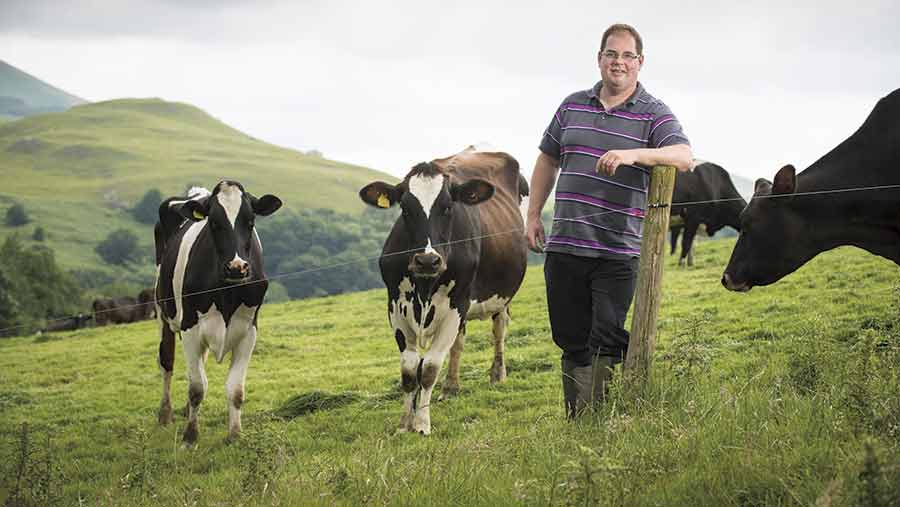 Stuart and Kathleen established the business in 1976, taking on 243ha Radholme Laund Farm at Cow Ark in the Forest of Bowland – which gets 180 cm of rainfall a year and sits at an altitude of between 180 and 300m – on a three-generation tenancy from the Duchy of Lancaster Estate.

They later added another 40ha with the purchase of Poultry Farm, seven miles away in Mitton, which is used for silage making and to graze youngstock and beef cattle.

After three months working on farms on New Zealand’s North Island in 1998, Mark returned to Radholme Laund Farm, taking an increasing role in management of the farm before becoming a fully fledged partner in the business in 2010.

“My time in New Zealand gave me a real passion for grazing cows,” says Mark.

“I worked on two farms – one a near-perfect New Zealand system, and another still building towards where it was going.

“Then I came back and began looking at our practices,” he says.

On his return, Mark pushed for a paddock and cow track system to optimise milk from grazing. Cows are typically turned out in early April at Radholme Laund Farm and remain outside until mid-November, using AstroTurf tracks to access grass paddocks.

Since 2011, Radholme Laund Farm’s milking herd has increased 56% from 240 to 375. In the next 18 months, numbers are expected to increase to 400. Concerned it would heighten the risk of disease entering the herd, the Veritys decided against increasing numbers by purchasing heifers.

They switched from a year-round calving system to autumn/early winter calving, with heifers calving for the first time at 24 months.

“We tried spring calving,” says Mark, “but with the altitude and the rainfall here, we couldn’t get them out soon enough.”

Improving fertility and condensing the autumn calving period is a main area of focus at Radholme Laund Farm. Nutrition and veterinary routines are tailored to get cows back in calf quickly.

Adoption of innovative technical and IT solutions

Calving has been condensed, now starting in early September rather than late August. This year the Veritys intend to finish on 10 January 2017.

“We used to calve 23 August, but we found that by pushing it back two weeks we can get extra grazing,” he says.

“Our aim is to calve everything before Christmas. This year we’ll leave it to 10 January.”

They plan to further condense their autumn calving block, with everything calved by the end of November.

“If we could go back five years, maybe we’d try to get there a bit quicker, try tighten the calving block a couple of years sooner.”

More than three million litres of milk are produced at Radholme Laund Farm each year and sold to Arla Foods.

Cows are milked twice a day in the Veritys’ herringbone milking parlour, with two people milking and one person bringing cows in from the fields.

Cost production is 21.6p/litre, including rent, finance and depreciation. Of this, feed accounts for 7.5p/litre – a figure the Veritys hope to reduce.

“If we can keep feed costs down that’ll be the biggest driver of future profit,” says Mark.

“We feel we can get more from the forage side by producing a better quality silage, cutting some of the concentrates out, and increasing forage intake.”

“In three years, I’d like to feel we will be on a more condensed calving block, and I’d imagine we’ll be working with lower milk yields as we try to increase milk from forage.”

“Cawood Scientific is proud to sponsor the Dairy Farmer of the Year Award, which has seen outstanding entries from small and large producers up and down the country. Our finalists are producing milk to the highest standard and, despite difficult conditions, turning a profit.”