While the Mixed Farmer of the Year category encompasses a wide variety of farming systems, each of the finalists has much in common. They are hard-working, business-savvy and have a strong understanding of how to deliver what their customer wants.

The 2017 Mixed Farmer of the Year finalists are: 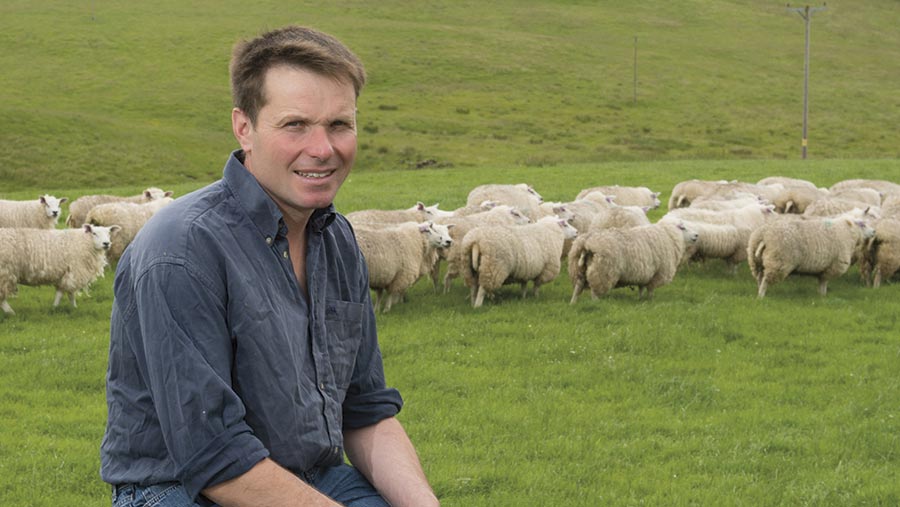 Nestled within sight of the southern reaches of Cairngorms National Park, Incheoch Farm is described by Neil as a “farm on the edge,” with wilder, less productive land further up the valley, and land of top horticultural quality downhill.

Far from bemoaning the fact that he isn’t on the valley floor, however, he has grasped the opportunity to raise his family in a beautiful environment while producing cattle and sheep that aim to outlast and outperform the competition.

The family were early adopters of the Luing breed, and still market breeding heifers and bulls alongside a Simmental herd.

Lleyn and Texel rams are bred from a high health status flock of 1,200 ewes, with a scientific focus on selecting for desirable traits, while still retaining the shape and style that customers demand.

The resulting top-quality rams are then sold at the on-farm auction – the culmination of the year’s work – with approaching 100 Texel and Lleyn rams set to go under the hammer again this September.

The opportunity to sell sheep with a higher biosecurity status, show off the land on which the animals were raised, and bring the community together for a beer and a barbecue were all inspirations for establishing the event, set to enter its 10th year this season.

Fat lamb production has also had costs trimmed by a focus on more production from grass, with lambs now finishing on high-powered red clover leys grown as part of a productive rotation that includes malting barley, wholecrop and swedes.

Neil is also proud of the 500ha farm’s environmental status, and credits his wife Debbie with strong support in both the day-to-day running of the sheep enterprise and negotiating the jungle of paperwork that has seen them continuous members of stewardship schemes since 2004.

Not content to rest on his reputation, Neil has recently concluded the speaking tour that completed his Nuffield scholarship, which turned his breeding philosophy on its head to focus on removing inefficiency rather than breeding for efficiency.

In spite of benefitting from increasing subsidy payments in recent years, the business has also managed to drive down the proportion of income from subsidy from 20% to 14%.

Government cash is being diverted into infrastructure improvement, such as drainage and fencing, in an attempt to get in as good as shape as possible for any Brexit headwinds.

Neil is a thinking and analytical farmer who is continually striving to produce animals that will thrive in a low-cost, grass-based system. The fact that the vast majority of his customers are repeat buyers is a testament to the proven quality of his animals. 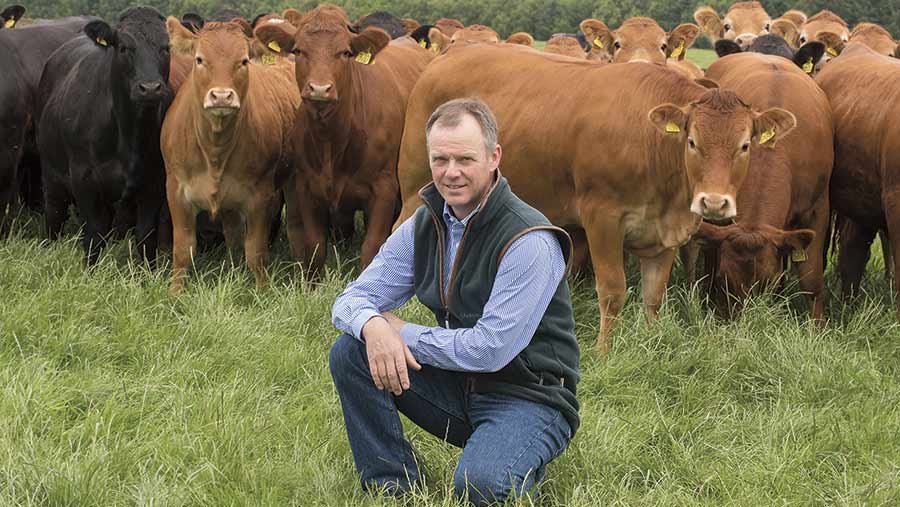 Family man Robert is the driving force behind the expanding business at Upper Nisbet, in the Scottish Borders, where, through hard work and a willingness to continually embrace developments in best practice, he and his wife, Jacqueline, have doubled the size of their tenanted farm in 17 years.

He credits his father with instilling in him and his two brothers the ambition and work ethic that has driven them each to run a farm of their own.

Although the three brothers now farm independently, they still collaborate strongly to the benefit of each of their businesses. Robert also sees outreach to the supply chain and the consumer as pivotal to successful farming.

“Every day is an open day at Upper Nisbet,” he says, explaining that they regularly host visits from discussion groups, school children, and have also welcomed butchers and chefs to sell the story of the quality of their arable and beef farm.

“Grass is my break crop,” Robert says, explaining that 40ha per year of medium-term grass leys are planted on the farm each year alongside an arable rotation that comprises winter barley, winter wheat and spring barley grown for cattle feed or seed contracts.

Cattle are generously bedded up with the resulting straw, and the farmyard manure is vital for maintaining the structure and fertility of the light, free-draining land, says Robert.

While the best bull calves are kept back to sell as bulls, the majority of cattle are marketed through the fat ring at St Boswells, with Robert aiming to sell there 52 weeks per year to provide consistent supply to the strong contingent of independent butchers in the area.

The farm benefits from being in an area low in both weeds and diseases, with a £20/t premium on cereals for seed production, and the herd enjoying a level 3 accreditation against Johne’s disease, as well as being mercifully TB-free.

Robert’s primary goal is to set the business up to be able to give both his sons the opportunity to farm and he is chasing further efficiencies from both the cattle and cropping enterprises to do so.

This is being achieved by continual performance monitoring of the finishing cattle and by reducing waste in the arable system by taking advantage of the increased cropping area to justify precision farming technology such as variable rate fertiliser applications.

Robert’s attention to detail is evident in the presentation of his cattle and the farm. He is maximising the profitability of the beef herd by selling stock at a precise specification to a variety of loyal customers. 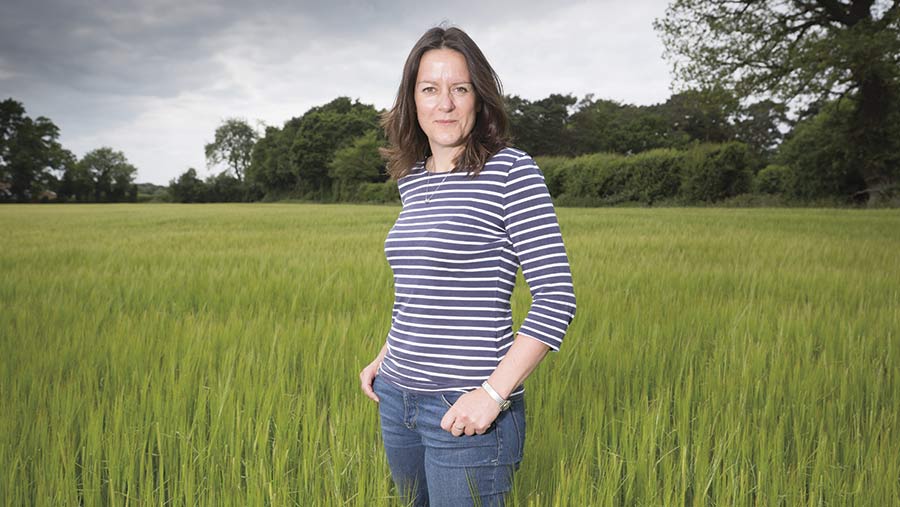 When you visit Church Farm, 30 minutes north of Norwich city centre, it’s easy to see why Emily describes a lengthy crop rotation as “the bedrock of a resilient farming system”.

A relatively modest 160ha by today’s expansive standards, the farm nevertheless has sugar beet, malting barley, wheat, maize, energy crops and rotational grass flourishing thanks to a traditional grass-cereal-root rotation with a high-tech dairy operation at its heart.

The light, sandy arable land is kept fertile by 25t/ha of slurry and farmyard manure generated by the 55 robot-milked Brown Swiss cows and followers that were the key to Emily returning to the farm in 2007.

After completing her Masters in sustainable agriculture from Harper Adams University, she wanted to return to the home farm, but with five family members already in position she realised the only way was to add another enterprise, and settled on dairy processing.

Now there are eight part-time members of staff working in the dairy to convert up to 4,000l of milk per week to keep up with demand from a variety of regional shops and farmers’ markets.

Not content with only reaching out to the public directly with goods and services, Emily is continuing the farm’s 35-year reputation for hosting visits from schools and other interested parties.

“The robot is a great virtual story,” Emily explains, as it allows children to seamlessly see the journey of milk from the cow, through the pipeline, culminating on the table.

This has tied in with her outreach work beyond the farmgate, which, among other things, has involved supporting events such as BBC Countryfile Live, organisations such as Ladies in Beef, and setting up #Febudairy, her riposte to the high-profile #Veganuary campaign.

Succession planning is at the heart of this cohesive family unit, which meets for a formal business discussion every second Friday. Emily says continuing to grow the business to allow the return of another family member, while reducing reliance on subsidies is vital.

Currently in discussion to sell the dairy products into a nationwide supermarket, she is targeting growing the dairy herd as the key to ensure a steady supply, saying “I want milk supply to be a problem.”

The way Emily carved out an additional dairy processing enterprise as an entry point back into the family business should inspire other young people returning home. Transforming the challenge of low prices into an opportunity is a vital skill others should seek to emulate.

Bridgestone are delighted to sponsor the Mixed Farmer of the Year category. We recognise the enormous challenge mixed farmers face in developing a broad range of technical skills.

The three finalists stand as excellent role models, demonstrating how a can-do attitude will reward those seeking to build resilience into their business.