After a last-minute drop-out, just two businesses are left to vie for the biggest prize in farm contracting.

They might focus on very different markets, but both have professionalism, reliability and ingenuity at their heart.

The 2019 Contractor of the Year finalists: 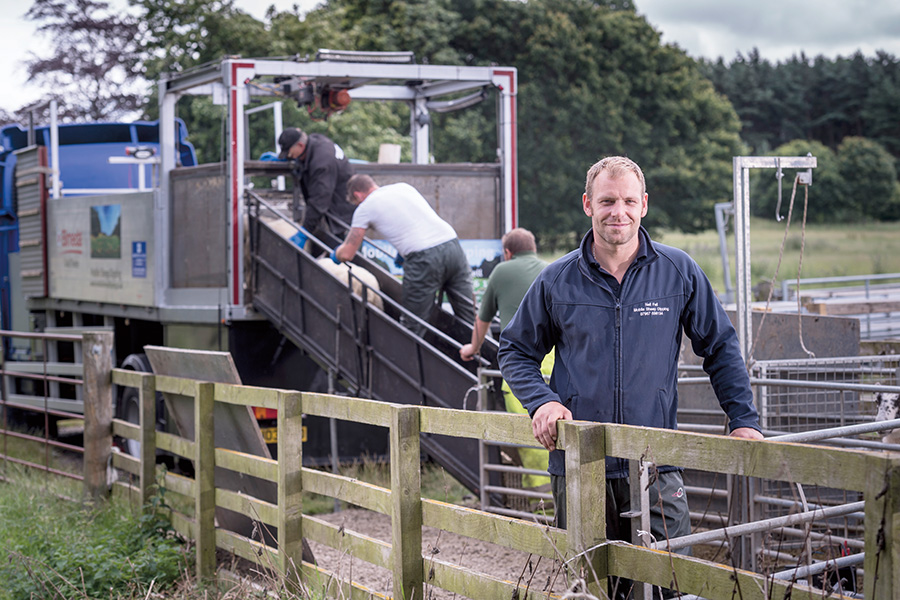 The return of sheep scab and resistance to injectables means dipping is back in vogue and Durham-based contractor Neil Fell is the man who hundreds of UK farmers have turned to.

His year-round mobile dipping service is available from Lands End to John O’Groats and dominates a somewhat niche market, thanks to an ingenious home-designed plunge dipper.

At peak efficiency, he can soak more than 4,000 ewes in a day, providing an efficient response to the worrying revival of scab issues among British flocks.

Sheep scab
With compulsory dipping abolished in 1992, many farmers have understandably moved away from the somewhat unpleasant business of dunking sheep.

However, resistance to injectables used to treat scab – a contagious condition spread by psoroptic mites – was found last year and the problem is nearing an epidemic, leaving dips as the only product to consistently protect against it, as well as blowflies, ticks, keds and lice.

Neil has become a trusted specialist on the subject, giving potential customers advice on parasitic issues, but the organophosphate product needs to be handled carefully – something he takes exceptionally seriously.

He has been working closely with the Environment Agency, Natural England and the Welsh Dee Trust to introduce new industry safety standards and has been involved in the process of forming an accreditation scheme for contract plunge dippers that will eventually see the rules tightened.

Plunge dipper
Central to his business is a patented lorry-mounted plunge dipper that he designed after seeing portions of chips being dunked into oil at his local chip shop.

Loosely based on a Kiwi design, it was built with the help of Wolsingham-based C&A Agricultural Engineering and uses a remote-control cage system to lower batches of 12-18 sheep into the scab-clearing liquor while allowing the operator to stand at a safe distance.

Animals are herded up the rear walkway into the cage, which is then lowered using a winch into the 1,000gal tank of Bimeda Gold Fleece (diazinon) mix.

Their feet remain on the cage floor for most of the time, which reduces stress compared with traditional dunking methods, but are totally submerged twice in a minute to make sure the dip fully covers them, including ears and eyes.

The animals then move to a rest area, with a gentle slope to take drippings back to the main tank, before leaving through one of the hydraulically powered gates.

Waste dip is transferred to on-board tanks and carted home – for which Neil has a waste carrier licence – where it is stored in a 20,000-litre container for almost a month.

During this time the chemical breaks down to the point of being non-hazardous, and it is then collected by a chemical treatment firm.

Costs
By farm contracting standards, Neil’s costings are pretty easy to calculate, because the dipping rig is paid for and chemical is bought at a fixed price each season.

He keeps close records of jobs to log and justify when and where dip is used and, so far, growth has been down to word of mouth, trade shows and social media promotion, which is testament to his customers’ satisfaction.

His team of up to six dart all over the UK and can work up to seven days a week from June through to October, when they are generally booked up a fortnight in advance.

Neil has established himself as a key player in the sheep-dipping business and is pushing hard to improve environmental safety, product performance and work efficiency. His mobile system is central to this and has revolutionised the dipping process. 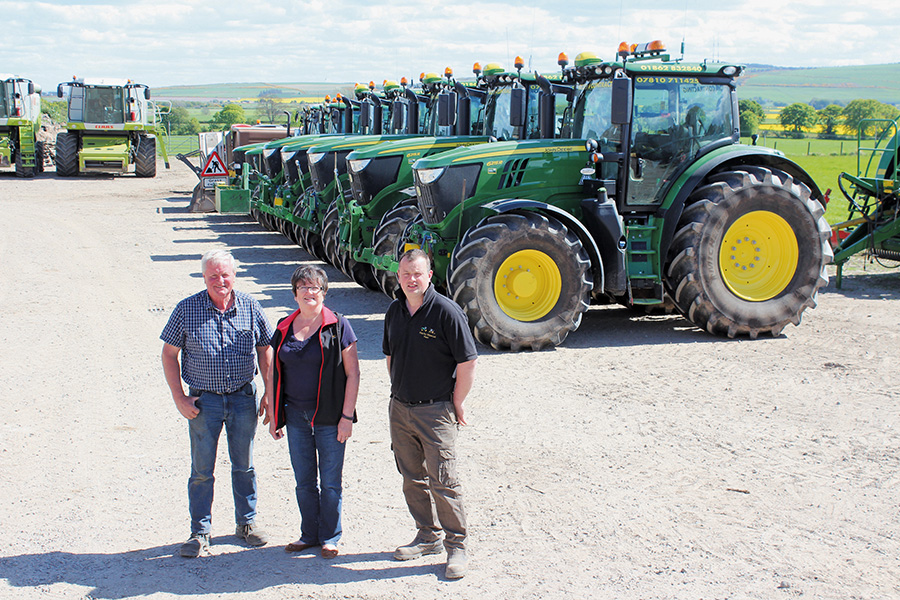 Having run a contracting outfit for just shy of 40 years, family team Allan, Alyson and Stuart Wilson know a thing or two about the delicate balancing act of business profitability and customer satisfaction.

With just 1.6ha of their own land to worry about, the company is fully focused on providing a quality agricultural service to farms across the far north of Scotland.

Early operations centred around hedgecutting and lime spreading, but Allan soon realised both he and his customers could benefit from experimenting with new approaches to traditional farm tasks – a mentality that has continued to this day.

The business’ notable achievements include being the first in the area to have a self-propelled forager (before latterly switching to baling/wrapping), the first to grow oilseed rape, and the first to install a biomass boiler to heat the house and workshop.

For instance, the use of variable-rate drilling and nitrogen applications has helped target inputs more effectively. The business also offers a soil-mapping facility.

Stuart continues to track down machinery that can help improve the traceability of work.

A Bunning muckspreader kitted out with weigh cells provides detailed application records, and a McHale Fusion baler wrapper due to arrive later this year will be fitted with weigh cells and moisture meters to give customers a better idea of their yields.

On the arable side, precision sowing of oilseed rape with a Vaderstad Tempo will allow the team to lay seed, fertiliser and slug pellets accurately and at exceptionally low sowing rates of 1.2kg/ha.

These potential farming challenges are being seen as great opportunities to expand, so there’s a strong mix of drilling kit for specific jobs, including sowing grass margins, beetle banks, catch crops and green cover crops.

Machinery replacements
Purchasing decisions are carefully planned to make sure the business gets maximum value for money.

The company has employed Farmplan computer software since 1990, which makes it easy to cost every spare part invoice against a machine.

Closely tracking each machine’s costs helps to monitor its value to the business, and rising repair bills often prompt the team to consider the merits of looking for a replacement.

Mechanically minded operators also have their say on the decision to trade in a machine. The approach is always pragmatic, taking into account repairs costs and down time, any potentially cheap deals on replacements, and the team’s experience and knowledge of machinery.

On the tractor front, the six-strong fleet has been John Deere for 25 years. Like with the implements, there’s no set replacement policy – they take a more considered method by monitoring performance, current market values and potential new purchase details before making a decision.

Where possible, bulk buys give greater bargaining clout. Allan is a tough negotiator and has a keen eye for a deal – the last tractor purchase took place just before the Brexit referendum, which saved the business a lot of money.

Payments tend to be cleverly structured to suit the business’ cashflow, too.

That said, most of the eight-strong team have been at the company for a decade or more, so have close relationships with customers, which ease the management pressures on Allan.

Mornings start at 7am each day to allow time for a pre-work chat before washing the machines and carrying out any essential servicing prior to leaving the yard.

Holiday time is pretty flexible by farm contracting standards and there are always two operators for each specialist machine on shift, which means the work can continue in case of an emergency.

Invoices are sent out soon after a job is completed so that any problems can be addressed early on. This flexibility helps make sure jobs are finished promptly and customers are happy.

Allan is never afraid to be the first to implement new machinery and technology that he believes will improve productivity and efficiency. Customer service is central to the business, but it’s balanced with careful costings and shrewd investments.

What the judges liked
• Good customer service, evidenced by long-standing contracts
• Keen to trial new tech that both improves efficiency and gives customers access to kit that could benefit yields
• Detailed knowledge of business costs and close tracking of machinery performance to get best value from purchases
• Close ties to the local farming community

“The two finalists are tackling challenging times in the agriculture sector head on. A willingness to innovate and the ability to plan carefully have seen them take on essential and trusted roles in their customers’ businesses.”