We catch up with Poultry Farmer of the Year, Phillip Crawley of Sunrise Eggs, Leicestershire, to find out what he has been up to since the awards ceremony in October.

See also: Find out what makes Philip Crawley our Poultry Farmer of the Year

What is the biggest challenge facing agriculture generally and how could it be rectified?

Public perception of what we do and why we do it. We need to educate people about how we produce healthy, affordable food in an environmentally friendly manner with a low carbon footprint.

Listening to others is so important; you may not agree with them initially, but everybody has an opinion and it needs to be considered.

There are so many people in the poultry sector who don’t just run great businesses, but also do great work in the wider interests of the industry. 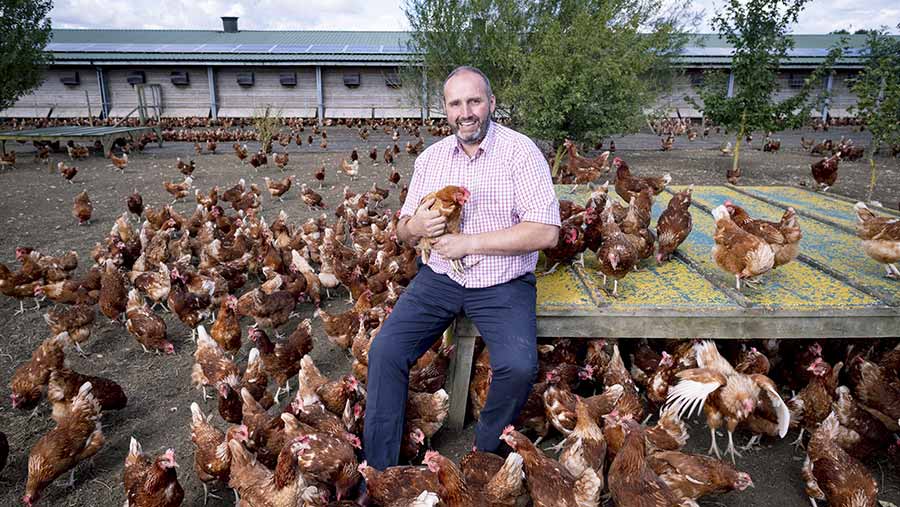 What’s the best farming decision you’ve ever made?

Going into free-range egg production at a time when our business was solely cage production, and then making that work.

We made the switch when the free-range industry was relatively young, but that’s what consumers wanted and where the growth would be.

I hope barn production becomes even more widely accepted and will supplement the decreasing colony production in future.

It’s important that free-range eggs continue to be sold as a premium product.

What traits do you need to be a good farmer?

Hard work, integrity, forward-thinking and a willingness to think outside the box.

Innovation is vital in this respect.

Outside on the range, we’ve invested in solar energy and planted more than 60,000 trees across more than 40ha.

Planting them felt odd to start with, but it allows the birds to exhibit natural behaviour and ties in with our desire to produce safe, wholesome and nutritious food with high welfare standards.

What is your ultimate farming goal?

To pass on a successful business to the next generation as my mother and father did to their two sons.

My brother Ady and I are so proud of the whole team here and what our father started after leaving a career as a nuclear physicist in the early 1970s.

We do what we do because we enjoy it, but recognition in the Farmers Weekly Awards gives us even more of an incentive to keep driving the business forward in an environmentally and economically sustainable manner.

Where have you put your Awards plaque?

On the office foyer wall.

a buoyant, rewarding career for anyone willing to make the effort to be involved.

The Farmers Weekly 2019 Poultry Farmer of the Year Award is open for nominations and entries now at awards.fwi.co.uk