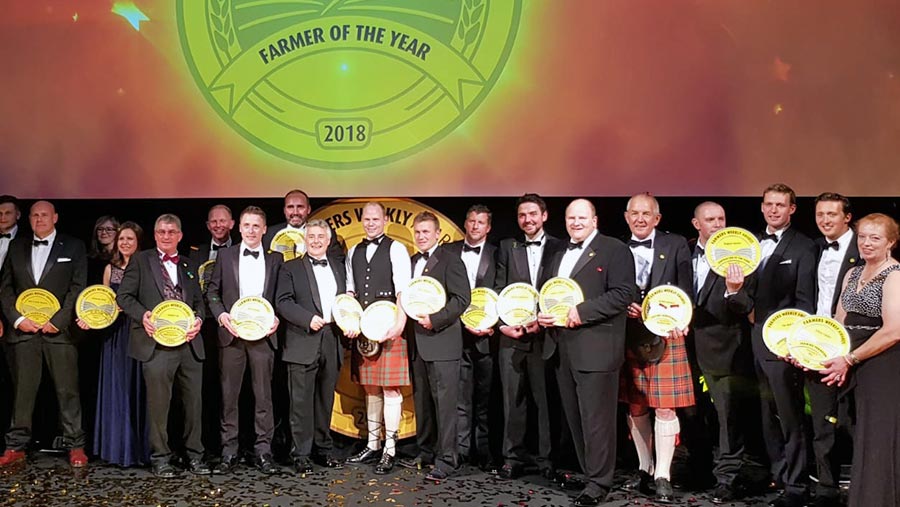 Hampshire farmer Craig Livingstone from Lockerley Estate at East Tytherley has been crowned Farmer of the Year at the Farmers Weekly Awards, the Oscars of UK farming.

Mr Livingstone, who also won the title Arable Farmer of the Year, was one of 15 farming award winners presented with the iconic yellow plaques last night (4th October) at a glittering ceremony in London’s Grosvenor House Hotel – the biggest night in the farming calendar.

Writer, broadcaster, actor, and former Conservative MP, Gyles Brandreth, presented the awards in front of more than 1,000 guests in the Great Room at the Grosvenor House Hotel on London’s Park Lane.

A former agronomist, Craig, has managed to both raise yields and cut costs on 800 hectares of arable crops, by focusing on the health of his soils and making some bold changes to his pattern of crop rotations.

Craig has halved the area devoted to oilseed rape and added spring beans, winter barley and winter oats to widen the rotation to six years.

He is nursing his depleted soils back to health, adding lime and liberal amounts of organic matter, and is a firm believer in cover crops.

Karl Schneider, Farmers Weekly Editor said: “Craig is a first-class farmer, and it’s remarkable how much he has managed to achieve in just three years at Lockerley Estate. He’s also a great ambassador for British farming.”

The Farmer of the Year Award, the overall “winner of winners”, is sponsored by McDonalds.

Diversification Farmer of the Year (sponsored by Innovation For Agriculture)
Charlie and Will Moreton, Welsh Road Farm, Warwickshire