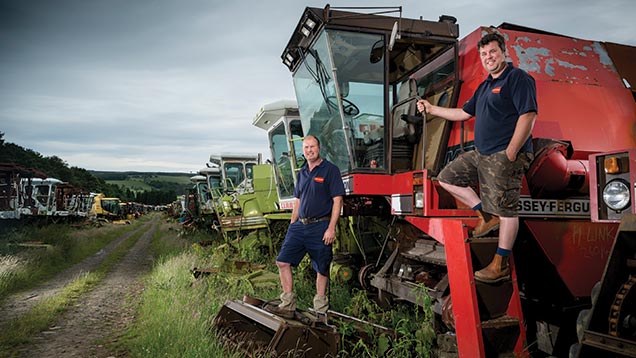 There is no rest for Richard and Fraser Manners, who are running a mix of thriving and growing diversifications at two farms as well as remaining hands-on with their arable operation.

The collaboration and integration of all aspects of their business is an impressive feat, which gives robustness and resilience to the Manners brothers business model.

At Battle Bridge Farm near Alnwick, the brothers run a combine breaking business, a haulage contracting business, have an HGV workshop and a shot-blasting and spray-painting facility.

At North Farm near Embleton, on the picturesque Northumberland coast, they have converted derelict buildings into eight holiday cottages, with several more in planning, as well as leisure and laundry facilities, which will provide for guests and hopefully, in the future, the wider community.

The combine breaking was started by their father John Manners in the 1970s and 1980s but has grown a lot since then. Richard buys at least 70 combines a year and has more than 350 in the yard, which covers 3.2ha.

Combine breaking and haulage sound like they have got potential for a messy yard, but there is no such thing at Battle Bridge.

It is organised, tidy and efficient. Every combine is broken down and sold off in pieces, or refurbished and sold as a whole. All parts are delivered within the UK in less than 24 hours as they “fully understand the importance of a functioning combine during harvest.”

Manners Transport specialises in recovering agricultural machinery with its seven wagons and 12 specialist low-loading trailers, including a bespoke trailer they have built, which will transport a combine and header at the same time.

With all this to manage, it is fortunate the brothers work well together and have a huge sense of the value of a satisfied and loyal customer base, as well as a happy and skilled workforce.

“I think a lot of farm staff and wagon lads don’t get a chance to better themselves,” says Fraser. As a result, they support the team with any professional development they want to pursue and give them as much responsibility as possible. Their longest-serving employee has been with the business 42 years is no coincidence.

Technology has been embraced throughout their diversifications. A key example is the online combine parts shop that facilitates their global retail – an important area of the combine breaking business.

Despite all the investment in their other enterprises, the farm is still very important to both brothers, with Richard overseeing crop rotations and management, and Fraser doing all the combining.

Mash Direct, founded by Martin in 2004, produces a huge range of vegetable accompaniments that are sold through independent and large retailers. He now manages 570ha and employs 170 staff to deliver a multi-million-pound turnover.

James Hewetson-Brown began growing wildflower turf in 2003 and, every year since, production has doubled. Supplying the London Olympics in 2012 gave him the cash injection needed to invest and expand.

“All have demonstrated outstanding levels of entrepreneurship and innovation and are great examples of farm diversification, which AgriBank continues to support with innovative financing solutions.”