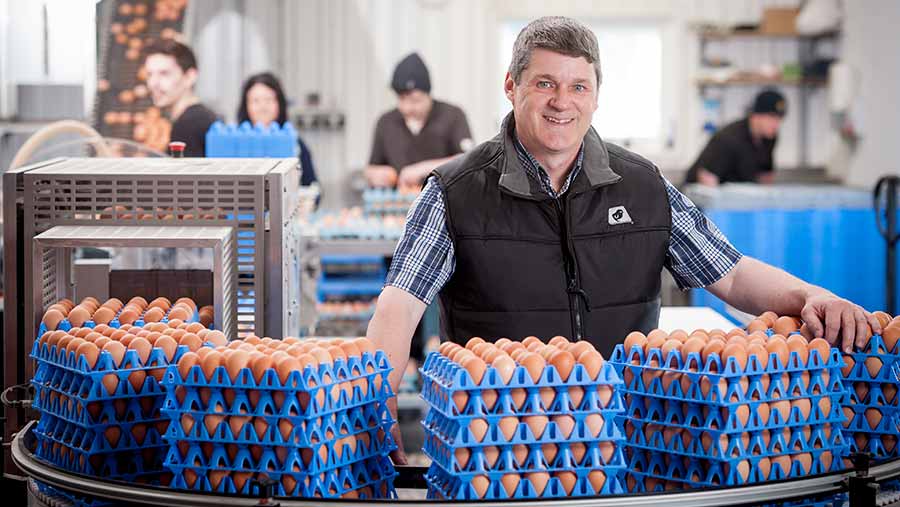 “Do it yourself” is the name of the game at Glenhead Farm on the south-west tip of Scotland, where free-range egg producer James Baxter has built up one of the best-performing flocks in the country.

“We only hire people so we can learn from them and do it ourselves in the future,” he says.

This independent approach has seen the family go from a standing start to running a highly profitable 64,000-bird unit, complete with renewable energy investments and manure dryers, in just five years.

Finding the capital to get started was challenging, especially when the credit crunch hit as preparations for the first shed were being made.

But perseverance paid off, and a combination of a bank loan and a grant under the Scottish Rural Development Programme saw the completion of the first two 16,000 layer units in 2010, for a total investment of £1.3m.

“Each shed took 2,500 man hours of installation work, as we screwed together 75 tonnes of equipment,” James recalls. “Doing it ourselves puts us in the driving seat when it comes to breakdowns and maintenance.”

Building on the success of the first houses, in 2012 a third house was added, followed by a fourth in 2014.

Indicative of his forward-thinking approach, James made an early decision to install multi-tier facilities. “It was obviously the future at the time we were coming in, and we wanted to be in tune with the future.”

This has helped deliver the exceptional performance figures, with the most recent flock producing 327 eggs at 72 weeks, with an average feed consumption of 122g/hen a day and 4% seconds.

All eggs are sold to Noble Foods on a Happy Egg contract. As well as earning maximum bonuses, James has recently signed a four-year feed-linked contract, to protect margins should feed costs rise.

Staffing is very much a family affair, with James’s three sons, brother and wife Margaret fully involved in the business. And cost control is tight, as James keeps a spreadsheet for just about everything. “If you can measure it, you can control it,” is his mantra.

Much use is made of probiotics, which are introduced at the base of each hopper using a home-made mixer. There is also considerable emphasis on renewables at Glenhead Farm, with two 198kW biomass boilers rigged up, providing heat for everything from the laundry room to the manure dryers in the chicken sheds.

As well as earning a good income from the Renewable Heat Incentive scheme, this also improves the atmosphere for the birds, lifts layer performance, while producing a more valuable, semi-dry manure which James hopes, in time, to pelletize.

There is also a 225kW wind turbine – imported from Estonia, self-erected, of course – providing electricity for the chicken sheds, as well as powering immersion heaters to warm the water for manure drying.

Dan runs a diverse egg producing/packing business in the south-west, with 3,000 hens, 2,000 ducks and 1,000 quail. Highly effective marketing and branding is used to drive sales of his free-range chicken, duck and quail eggs.

Daniel has led from the front in developing one of the country’s premier egg businesses. The business is based around 15 farms – including colony cage and free-range – plus two state-of-the-art packing centres.

“We would like to congratulate each of the finalists in the Poultry Farmer of the Year category. Each one has demonstrated industry leading standards and we wish them continued success.”