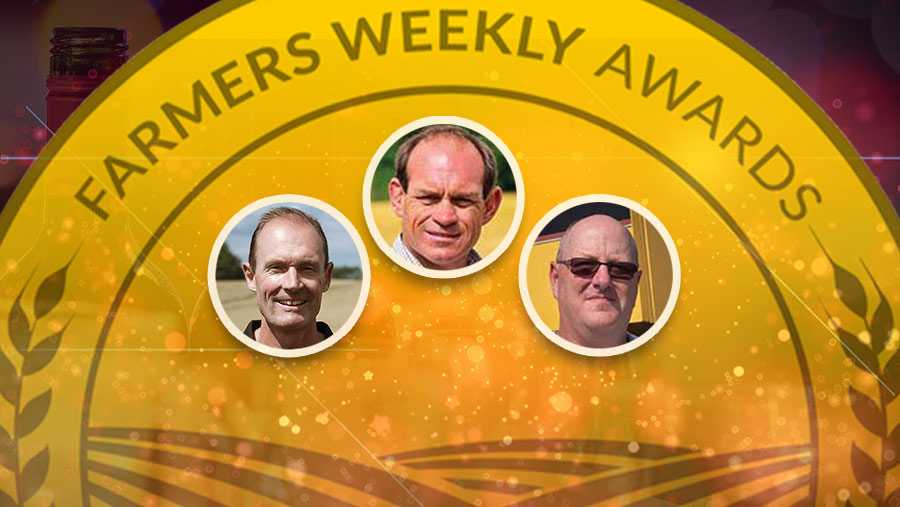 All three finalists for Farmers Weekly’s Arable Farmer of the Year are focused on improving cropping margins rather than pushing for out and out yield and are reaping the benefits of improving their soil health. 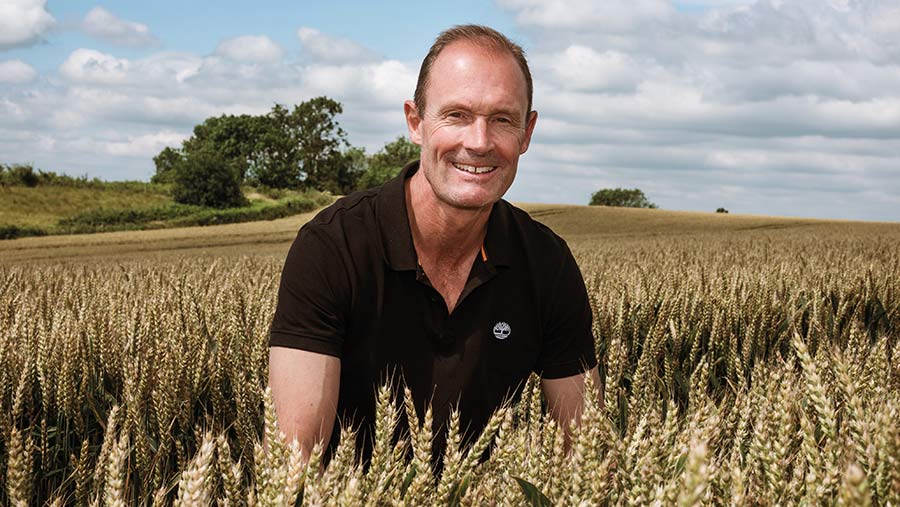 While visitors to Andy Barr’s farm in mid-Kent will see an iconic Oast house, the one thing they won’t see is a shed full of shiny, expensive kit.

That’s because regenerative farming pioneer Andy Barr has slashed his costs. He has done this without seeing a dip in yields – something many growers can only dream of.

In fact, with his focus on biological farming, Andy achieved the impossible two years ago – his combine recorded double-digit yields on a block of land that no one else wanted to rent.

Back in 1995, he returned to the family farm after working in the London banking sector. He recalls that the farm ploughed everything, had a dairy herd and 1,000 sheep.

However, radical change was needed to deliver a profit each year and enable succession of the family business to Andy and his brother.

So he set about building a sustainable arable business while his brother took on the livestock side.

Andy achieved a major reduction in costs by completely changing the cropping system and diversifying income.

His journey started 20 years ago; he first embraced min-tilling and then, some years, adopted direct-drilling.

It was after moving to direct-drilling that he became interested in regenerative farming, as he saw better crop yields when grazing sheep on cover crops, and started to question the use of insecticides.

“I started believing we were getting more pests, as we were killing the beneficials. So we now have fewer pests with less spraying,” he says. Cereals haven’t been sprayed for 13 years.

While many farmers are now dabbling with companion cropping to help beat cabbage stem flea beetle in OSR, Andy is in his eighth year, as he used it to increase diversity.

Over the years, he found beans to be the best companion, and trials show his approach is reducing flea beetle numbers.

Twenty years on and he now has a business that is better placed to cope in the post-Brexit world.

Power and machinery costs now stand at  30% of what they once were with his lean machinery fleet, which consists of just one tractor – a 167hp Fendt 716 z– along with relatively low-value kit. He averages 51 litres/ha diesel use.

The low costs of direct/scratch-drilling are complemented by the use of resistant varieties, biostimulants, foliar nutrients, brewing microbes and tissue testing, which keep the crop health spend low. He spends just £50/ha on fungicides.

His improved soil health and  variable-rate spraying has seen fertiliser use fall by 80kg/ha for milling wheat.

This reduction in inputs while maintaining yields means his system is much more profitable – returning 18% more profit, as demonstrated in a major Syngenta trial comparing his approach with min-till and ploughing.

And this increased profitability has gone hand in hand with increases in wildlife, including insect pollinators and worms.

Working with biology means his system is much more resilient and last year, when farmers were struggling to drill in the wet autumn, Andy managed to direct-drill wheat in late October and achieve more than 10t/ha.

Looking to the future, Andy continues to tweak his system through on-farm trials and share his learnings with other farmers, encouraging others to take their first step on their regenerative farming journey.

Andy has a detailed technical knowledge and is prepared to make big changes with an eye on improving margins. He has developed a sustainable and resilient system that is producing high-yielding, clean crops with a relatively low spend.” 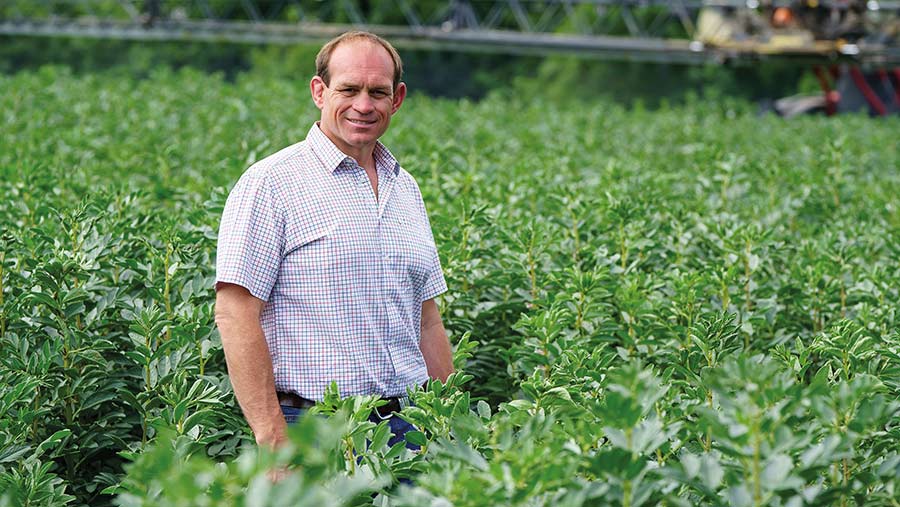 While County Armagh in Northern Ireland is known for its orchards and livestock grazing, it’s also home to an arable pioneer who has developed a sustainable cropping business supplying local markets.

Simon Best’s love for the environment stems from when he started growing oats for a local miller, earning a premium for adopting wildlife-friendly measures.

He is also a Leaf (Linking Environment and Farming) farmer, a member of the Nature Friendly Farming Network and has gone about improving his soil and slashing fertiliser inputs with a “less-is-more” mindset.

Having retired from being an Ulster and Ireland rugby player, Simon went back to the family farm, which was already undergoing a transformation from a mixed beef, sheep and cereals farm to a predominantly arable-focused business.

However, the climate (with rainfall of 900-1000mm), land type and hilly, small fields are limiting factors to out-and-out yields, which means he has had to focus on margins instead.

Another challenge was the lack of markets in Northern Ireland for break crops, such as beans.

Simon also wanted an environmentally sustainable system, because he believes in leaving the land for the next generation in as good condition as he inherited it.

He expanded the area from 145ha to 465ha, which made his farm one of the largest arable enterprises in Northern Ireland.

This expansion happened at the same time as the family diversified into a green waste recycling business, taking material from local councils to produce compost. This delivered a valuable new revenue stream.

The compost has been used to improve soil health. He is also minimising soil erosion by using RTK guidance to enable drilling across slopes while running spray tramlines at an angle.

Being unable to go for out-and-out yield, he has developed strong links with local markets, keeping supply chains as short as possible.

Most feed wheat and barley goes to a pig producer three miles away. Simon also supplies a local pigeon feed producer, and oilseed rape is supplied to the local broiler industry.

Milling oats are contracted to Whites Oats, five miles away, to supply Jordans, and earn a premium. Straw is also a key crop, with strong demand from the surrounding livestock farms.

Simon has adopted the latest technology to better target nitrogen fertiliser use, with regular in-season sap and tissue testing carried out to enable applications according to crop needs.

Simon has shown how a large arable enterprise can be run in a predominantly livestock area without compromising the environment.

The strong focus on soils has seen him build organic matter through the use of compost from the green recycling business, with soil organic matter now standing at 7.5-11%.

His use of plant testing technology has seen bagged nitrogen use fall by up to 30%, and all potash and phosphate needs are fully met through compost.

Insecticides haven’t been used for five years and he is reducing cultivations, using a disc cultivator instead of the plough when following oilseed rape and beans.

One key achievement is the development of a bean market, adding another break crop to the rotation.

Simon has worked with the local research institute at Hillsborough, looking at replacing imported soya, and this resulted in protein crops now being supported by policy.

In conclusion, Simon has shown that arable farming can thrive in a livestock-dominated Northern Ireland, producing high-quality food to high environmental standards.

Simon has developed strong connections with local markets and is maximising his returns. He has successfully established an environmentally sustainable arable business on a scale not seen in Northern Ireland.” 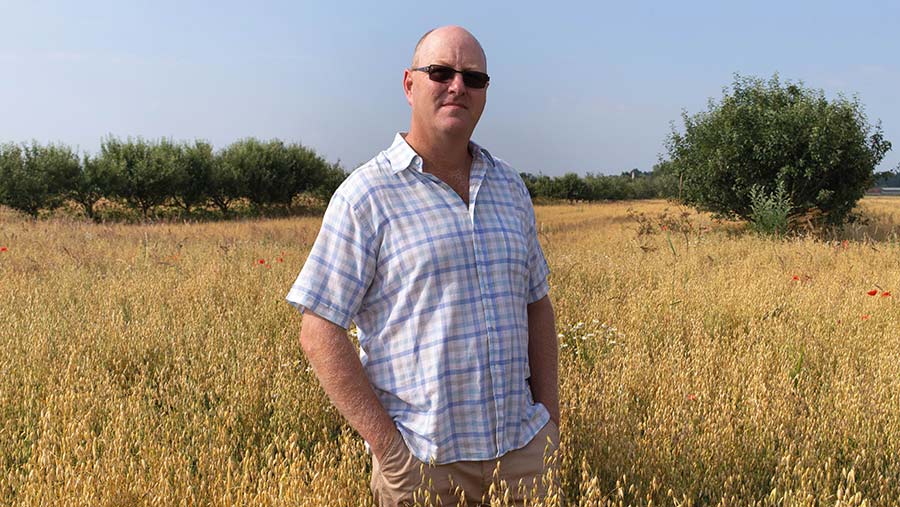 Trees are often seen as an annoying obstacle in arable fields, but in one corner of Cambridgeshire, they are earning their place in rows spaced one 24m tramline apart.,

Crops of oats destined for lucrative markets in Switzerland are being grown in fields along with apple trees which provide shelter, host beneficial insects and eliminate soil erosion on fenland soils south of Peterborough.

It is the perfect example of enterprise stacking by organic farmer Stephen Briggs, who has turned around soil health in an area prone to blowing.

Stephen, who qualified as an engineer before becoming a first-generation farmer, secured a county council tenancy for Whitehill Farm back in 2007. He quickly realised he had to do something different.

Faced with a huge capital outlay to establish an arable farm from scratch, he opted to go organic to reduce the capital requirement and optimise markets.

“A ride-on mower was our biggest piece of kit,” he recalls.

Another challenge at Whitehill Farm was the poor condition of the soil, which was suffering the effects of a tight rotation of wheat, oilseed rape, sugar beet and potatoes. Blackgrass was also a problem.

In 2007, the farm went organic and started focusing on niche-within-niche markets. Stephen is currently growing oats for export to Switzerland as a non-gluten organic cereal.

His focus has been to regenerate soils and increase biodiversity.

But rather than having a rotation that includes a number of fertility-building years, he has developed his own organic system based on companion-cropping within the crop.

This is made possible by going to wider crop rows, which also fits well with his inter-row weeder.

Stephen has adopted controlled-traffic farming on multiples of 6m, so minimising soil compaction with permanent wheelings.

In 2018, he converted a grain store into a farm shop and café, seeing it as a diversification that will also add value to some of his products, such as apples.

Three years ago, faced with no room to expand, he decided to go upwards instead by adding trees. While the main driver was to stop soil blowing, it has been another crop and he is convinced the oat crops are benefittng too.

Soil health has vastly improved, going from bacterial- to fungi-dominated fauna, and earthworm numbers have skyrocketed from a few to 15-20 in a spade full of soil. Soil organic matter has increased, with levels in his clay soils going from 3% to 6%.

He believes the turnaround in soil health over the past decade is the main reason for his 25% increase in crop yields – he is approaching 76% of conventional yields. This puts him near the top, with 50-60% being more typical.

And this is being achieved in a system that doesn’t require fertility-building phases, as the companion crops are putting fertility back into the soil, alongside crops.

His system doesn’t just deliver on yields – he is also extracting more value by aiming for a niche non-gluten market, with his Mascani milling oats commanding £330/t.

Wildlife has flourished and pollinator insect numbers are 400% higher. He has reconnected with the local community with the shop, and is spreading the word by hosting visits.

In conclusion, while many said his system wouldn’t work, Stephen has proved them wrong. He has established a business that is profitable without BPS payments.

He could soon prove his critics wrong again, as he is currently developing a no-till organic system.

Stephen has a real passion for growing organic crops and is willing to try new things. He has a very good handle on his costs and is spearheading a new way of organic cropping.”

“Fendt is proud to sponsor the Arable Farmer of the Year category at this year’s Farmers Weekly Awards. Congratulations to the three finalists, all who demonstrate a committed, innovative and adaptive approach to farming. ”