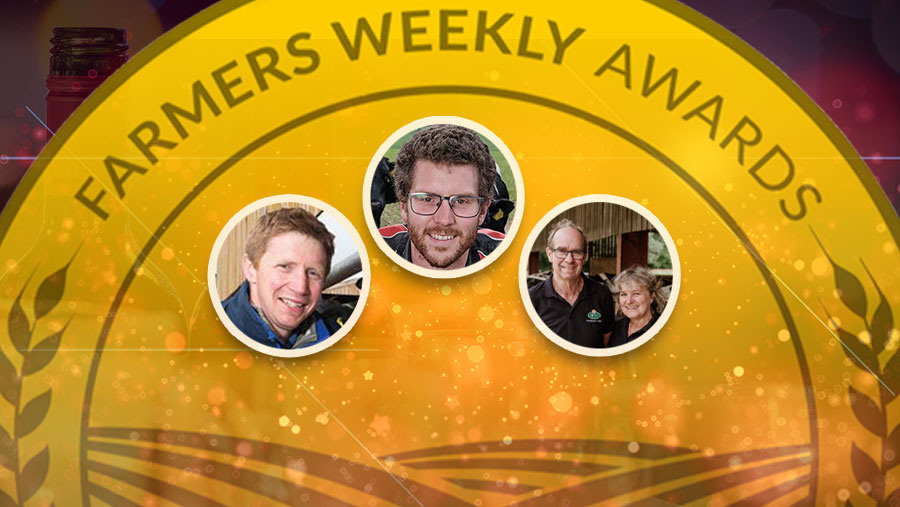 This year’s three finalists for the Farmers Weekly Dairy Farmer of the Year award are all investing to modernise facilities and create a dairy fit for the future, with high cow welfare and top technical performance in mind.

The 2021 Dairy Farmer of the Year finalists:

Placing a strong focus on herd health and fertility traits is helping Mark Larwood achieve an exceptional 12-month rolling pregnancy rate of 32% in his herd of 250 Holsteins.

To improve efficiencies and avoid serving cows during the hot summer months, Mark calves most of the herd in the autumn. Heifers calve at two years of age in a tight, six-week block from August to September.

“It’s a significant labour saving, and it is much easier to manage these heifers,” he says. 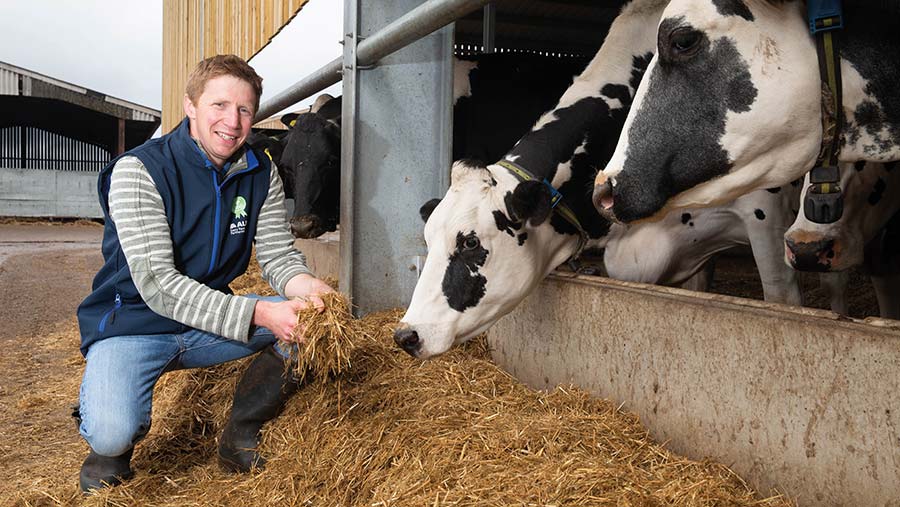 Heifers are served twice to genomic sires selected within the top 30% for profitable lifetime index. They must also be moderate on stature, and positive for fat and production as well as health traits.

First calvers are bred exclusively to genomic sires for the first two services. After this, easy-calving Angus semen is used. Meanwhile, most cows are mated to beef at first service.

He attributes this to running a high-health, closed herd, with 97% of heifers reaching second lactation.

The herd is accredited by cattle health regulatory body Checs as being free of bovine viral diarrhoea, and is monitored quarterly for infectious bovine rhinotracheitis, leptospirosis and Johne’s disease. The farm is also in a low-risk area for TB and the herd is tested every four years.

In the past year, the business has invested in a state-of-the-art dry cow shed to help improve transition health. The airy and light building provides cows with 11sq m of space each and deep straw beds.

Close-calving cows move into the shed three weeks before calving and are fed a partial dietary cation-anion balance diet comprising 4.5kg of straw, 16kg of maize, and 1.8kg of blend, as well as a dry cow mineral, limestone flour and magnesium chloride.

Although the shed has only been in use for six months, Mark has already noticed a significant improvement in transition health, with milk fevers running at about 1%.

Owing to the farm’s light, sandy loam soils and the fact grass growth slows in the summer, only low-yielding cows are grazed from March to October.

To help bolster forage stocks, Mark is growing 12ha (30 acres) of lucerne, which he says is much more drought tolerant. About 5-6kg freshweight is fed to milkers as part of a total mixed ration and has helped improve milk composition.

Mark does not shy away from investment, having also installed a 36kW solar array that will help him offset 70% of the farm’s daytime electricity use, saving 15p/unit. The remainder will be sold to Arla through the grid.

Next on the list is a new calf shed and clamps to help reduce forage waste and improve milk from forage.

He is a firm believer in benchmarking and is a keen participant in the Arla R500 and Milking It discussion groups. “Benchmarking is key and keeping a good handle on your costs is very important as well,” he says.

He also recognises the importance of carrying out consumer-facing activities and has welcomed nursery and schoolchildren to the farm to learn about dairy farming.

“It’s really important, especially in Norfolk, where there are only 33 dairy farms left.”

Mark’s drive, determination, and the fact he has a strong handle on all aspects of his business, are helping him run an extremely profitable dairy that is working synergistically with the arable enterprise.”

Investing in a state-of-art robotic dairy facility has given George Lester a wealth of data at his fingertips to help drive herd performance.

Every inch of the new greenfield site has been meticulously planned and well thought out, says George, who farms in partnership with his father, Geoff, and mother, Judith. 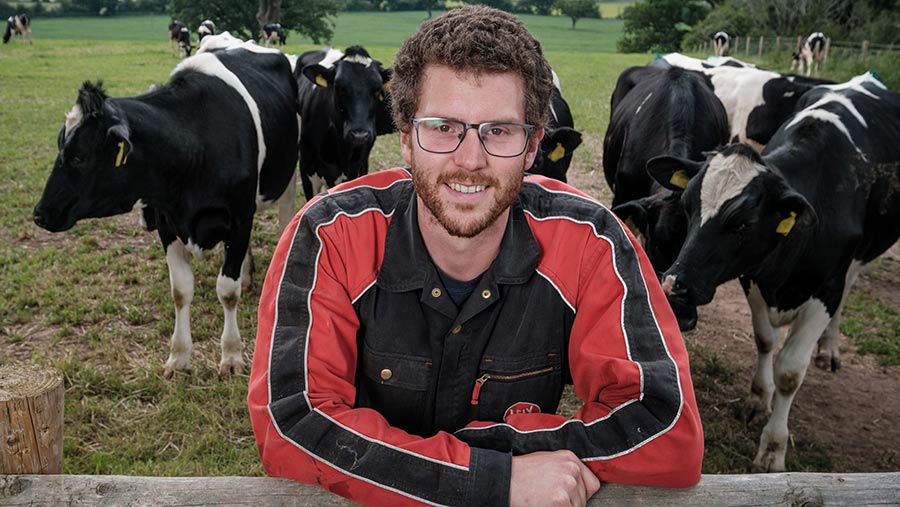 The whole unit has been designed to reduce reliance on labour, with automatic scrapers and a Lely Vector programmed to mix rations and feed the cows.

Cows are now fed up to 10 times a day, compared with the previous system where feed was mixed and fed once daily with a feeder wagon.

As well as saving two to two-and-a-half hours each morning, feed is staying much fresher, intakes have improved and milk from forage has doubled to 14 litres a cow a day.

Helped by his sister, Izzy, who works for Lely, George is always keen to trial new Lely technology. One such programme is Feed Optimiser, which aims to find each cow’s most efficient milk-to-feed ratio.

It monitors feed (fed through the robot) and compares it to milk production. It then challenges the cow to become more efficient, creating an individual feed table for each animal.

As well as improving the body condition score of cows at drying-off and subsequent transition health, the programme has allowed the Lesters to reduce the feed rate from 0.42kg/litre to 0.32kg/litre, saving £15,000/year.

Milk from forage has become a key parameter and to drive this, the family are focused on producing high-quality forage.

Three cuts of grass silage are taken annually, ideally with a large first cut that can be fed to milkers for the entire year to provide improved consistency, and later cuts reserved for youngstock. They have narrow, open-ended clamps so that fresh forage can be ensiled and last season’s silage can continue to be used from the other end.

Their rotation sees grass leys put down for two years, followed by maize and then wheat. Currently, about 24ha (60 acres) of wheat is sold, but George is considering crimping the wheat to cut bought-in protein requirements.

Having reached their target herd number, the Lesters are now placing more emphasis on bringing in extra heifers to allow them to cull poorer-performing cows. They have been genomic-testing heifers for the past 18 months and plan to flush their best animals.

Because they have been buying in animals to aid expansion from 70 to 186 cows, they vaccinate for bovine viral diarrhoea, infectious bovine rhinotracheitis and leptospirosis. They also test quarterly for Johne’s disease.

They have recently invested in a milk bacteriology testing kit to understand which pathogens are causing mastitis so they can target antibiotics more effectively. This, alongside selective dry cow therapy on 66% of the herd, is helping to reduce antibiotics use.

George says the plan now is to focus on improving performance further and closing the herd. They are also investing in a 35kW solar panel system to offset their daytime electricity use.

Geoff believes the business is in a good place to override uture labour shortages, with a great work-life balance and a 9am-6pm working day. “If more people embraced better working hours, it may encourage more farmers’ sons and daughters to stay in farming,” he says.

George, alongside his parents, Geoff and Judith, is embracing technology and using a wealth of data to improve performance and maintain high milk yields while providing cows with a top-quality environment.”

Having children enthusiastic about dairying encouraged Richard and Janette to invest in a new dairy and expand.

The couple, who farm with their son, Rob, are milking 180 autumn-calving cows, while their daughter, Hannah, is now farming with her husband in Oxfordshire. 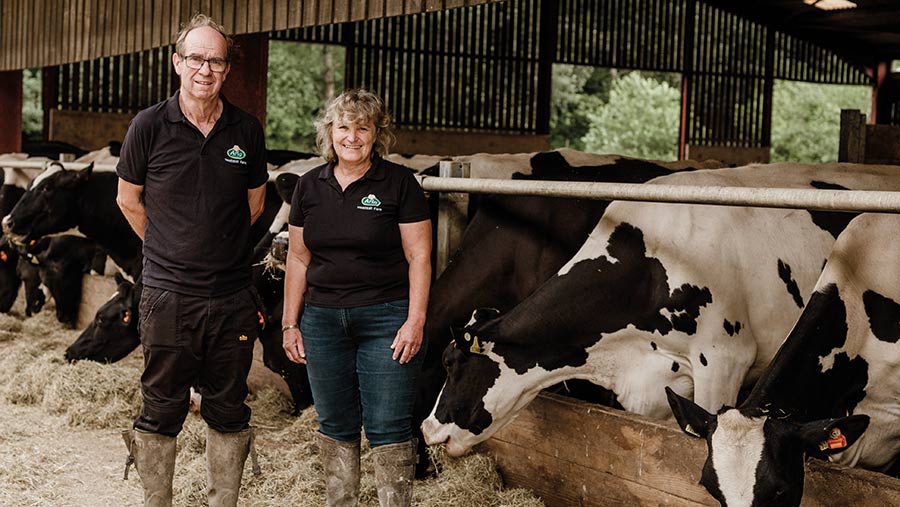 They built new sand-cubicle housing for 201 cows, put in a 24/24 GEA herringbone parlour, and added a concrete lagoon store during a time of challenging milk prices in 2014.

Just one year later the family successfully secured 93ha (230 acres) through a trust on a 10-year farm business tenancy two miles away. This is being used for youngstock and to grow crops.

Although it was a big expenditure in a short space of time, it has allowed them to build a dairy enterprise fit for the future.

The autumn block is the perfect fit for their farm, as the South East tends to get prolonged dry periods during the summer when grass growth can take a big hit.

The herd calves over 12 weeks and the aim is to calve all replacements in the first four weeks.

Janette, who heads up the calf rearing, is meticulous about cleanliness. Unsurprisingly, calf mortality is exceptionally low. Last year, only one calf was lost after 24 hours of birth, with five sets of twins making up five stillborn.

Calves are fed colostrum for the first two days and stay on transition milk for one week before transitioning to a skimmed milk powder.

They are offered three litres comprising 900g of powder twice daily up until five weeks, alongside pellets, fresh water and hay. At five weeks they drop to once-a-day feeding before being weaned at eight weeks.

The family have built up a good reputation locally and have repeat buyers for their beef calves, with some retained and sold as stores.

The family run a high-health, closed herd and are free from bovine viral diarrhoea, infectious bovine rhinotracheitis and leptospirosis. They also monitor quarterly for Johne’s disease and are in a low-risk TB area.

Last year, 65% of the herd was dried off with teat sealant alone, with monthly milk-recording data used to select eligible cows.

At housing in October, cows are fed a total mixed winter ration comprising grass silage, wholecrop, maize and blend made up of rape meal, barley and soya hulls, as well as molasses and minerals.

They have invested in an umbilical spreading system to give them more control over applications, and inter-row maize with grass to provide winter cover and reduce run-off.

Richard and Janette enjoy helping young people get started in dairying and have recently taken on a new herdsperson, Adam Christian.

The family want to explore how they can add value to the business and exploit their busy location, and are considering growing pumpkins and putting in a milk vending machine.

Janette and Richard are running a family-focused dairy, with all members of the team pulling in the same direction to create a dynamic and modern dairy enterprise.”

“We recognise and celebrate the hard work, dedication and skill involved in running a successful dairy business with the many challenges the industry faces.”