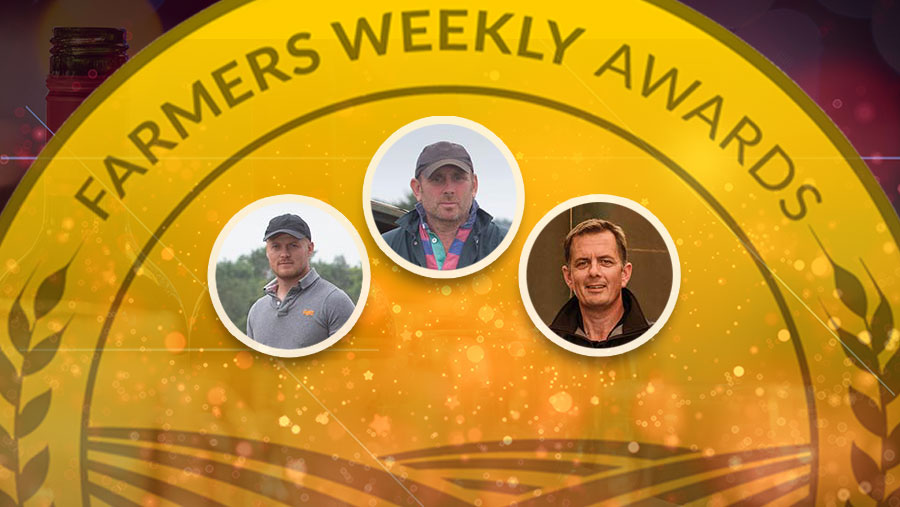 Three pig producers, who are all farrowing outdoors and have top technical performance, staff management and a drive to improve production and welfare, are hoping to be crowned 2021 Pig Farmer of the Year. 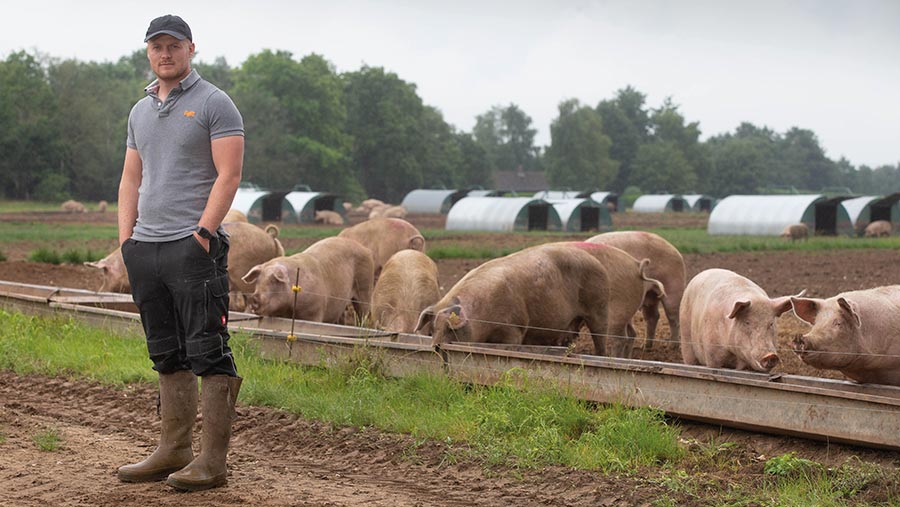 Young, innovative, and passionate about the pig sector, Ryan is absolutely the kind of ambassador the industry needs.

It is clear that in the short time Ryan has been managing Hall Farm, he has striven to be the best at everything he does.

The farm is a 1,200-sow outdoor herd near Thetford on 48.6ha (120 acres) of rented land, supplying piglets for the BQP Pilgrim’s  supply chain.

Ryan began managing the farm some three years ago after taking over from his dad, John Dyer, who initially took on the site in 1997. When he started managing the farm, aged just 25, he wasted no time in making some small and innovative changes to the system. These have had positively affected pig production.

One of the first things he changed was the service area, moving away from eight service crates in a tent to 18.

This has increased efficiency, enabling the team to serve more sows at once and giving the pigs more time in front of the boar for added stimulation. Ryan estimates this change alone has resulted in conception rates increasing to 90.45%.

Over the past few years, he has also been managing and perfecting the farm’s gilt fostering system. This “sub-sowing” system works by farrowing gilts a week earlier than the main herd. When their piglets are four weeks old, these are then weaned into the lairage.

Piglets that are a week old in the next batch of gilts to farrow are placed on the four-week lactating gilt.

When a sow has too many piglets the strongest pigs from the litter are placed onto a gilt that farrowed the previous week. And the pigs from that one-week-old litter are moved to a gilt whose litter has just been weaned.

All these gilts are housed in a hut-and-run system to help the gilts take to the new piglets and to maintain gilt condition.

This system is still being used on the farm, but on a much smaller scale due to Hall Farm transitioning to five-week weaning in the past couple of months. This is to help produce heavier and stronger pigs better placed to deal with stress at weaning.

Ryan says when the five-week weaning system is fully up and running, he will look to bring this fostering system back into wider use.

Ryan is keen to share his knowledge and passion and has hosted many farm visits. These have included visits specifically to look at and discuss the unique “sub-sowing” system he devised.

Despite his youth, Ryan has taken to managing his team of four staff like a duck to water.

He admits it has been quite a transition for the team to switch to a new system. However, he says the key has been involving staff in the decision-making process, ensuring they understand why the changes are happening and what the benefits are.

The team are paid a base salary, with a bonus given when they average more than 25 pigs a sow a year. He says: “The bonus can be worth upwards of £1,000 a year and the staff are quite motivated by this.”

The attention to detail by the team is working to aid good production figures. Piglets on the old three-week farrowing system are averaging 8.03kg liveweight at weaning, which is almost 1kg more than the industry average.

Ryan is a young and passionate farmer, who is always looking at ways the farm can move with the times and maximise output. He likes to take ownership and share his ideas with others.” 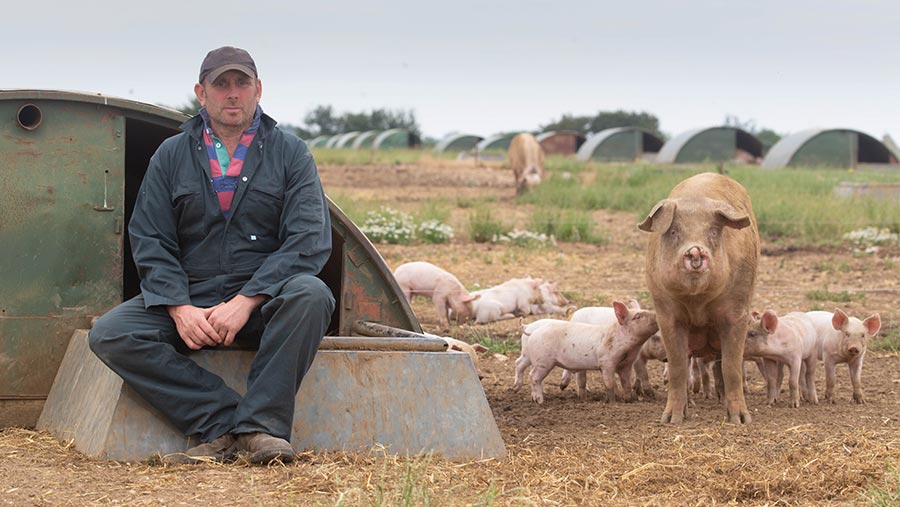 Since taking on the 140ha (346-acre) county council Grange Farm, near King’s Lynn, seven years ago, Richard has made great strides to improve production and make the business as self-sufficient as possible.

Before taking on the farm, Richard ran his herd on rented land on a nearby arable estate – something he says left him with little control of how the land was farmed.

Now he is running both pigs and an arable operation on the farm, along with a handful of sheep and cattle.

The pig and arable enterprises complement each other well. Richard says: “Every two years the pigs are rotated, which provides many benefits to the land and the crops that follow the pigs. The soil’s organic matter has increased, and the soil structure has improved. Crop yields have also grown.”

The straw and muck from the pigs are spread over the land and the arable side of the business provides a direct supply of straw for bedding – something that has been critical this year with straw prices so high.

Recently, he has changed to weaning pigs at five weeks old, a concept that was introduced to him by BQP. He was the first farm to trial five-week weaning, which is designed to promote heavier and healthier pigs.

The move has required a lot of planning and significant investment in extra farrowing accommodation, as he has had to adapt the system from seven-batch, three-week farrowing to 11-batch, two-week farrowing.

The first batch of five-week-old piglets were weaned in March this year, and the results look promising. Piglets weaned so far have averaged 10kg liveweight, with about 12.28 piglets weaned a litter.

There was concern that sows may not come onto heat as easily, having nursed piglets for five weeks instead of four, but there have been no problems with this.

While Richard has little control over the genetics and feed he uses, with BQP driving those decisions, he is still very much in control in terms of the direction he wishes his business to take.

He has invested in farrow feeders and long troughs, reducing feed waste by about 8%. He is also looking at using electronic identification next year when he depopulates and repopulates the herd.

“We are currently using Winpig to monitor our performance and benchmark against other farms. I also supply BQP Pilgrim’s with my figures, allowing me to benchmark cost of production and other key figures,” he explains.

Finding staff is one of the biggest challenges Richard faces. He has four full-time staff members: his wife, Charlotte, daughter Chloe and son Jack all work on the farm, as well as one other full-time member of staff, Graham.

Training is an aspect of farm management that Richard views as essential; Chloe is currently completing an apprenticeship, and Jack is just about to start one.

Richard is keen to support the environment by planting wildflower mixes around the farm. This year he also started working with Waitrose planting 4ha (10 acres) of pollinator mixes to encourage bees and boost biodiversity. He has also been accepted onto a Mid Tier Countryside Stewardship scheme

Richard has big plans for this county council tenanted farm and has been putting the foundations in place over the past few years to create a productive and efficient farm. He is a focused operator and is driven to achieve his goals.” 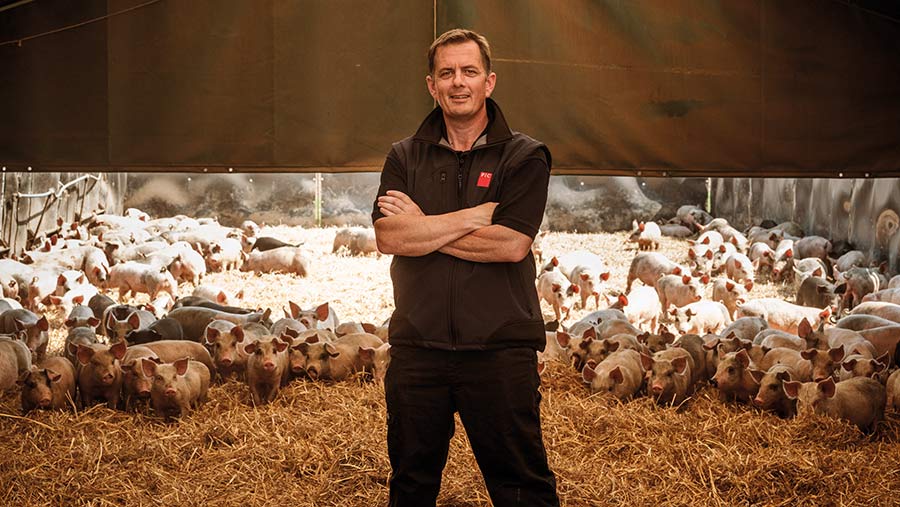 Since arriving at Park Farm in 2012, pig unit manager Justin Willoughby has made vast improvements to the performance of the 350-head farrow-to-finish farm, as well as streamlining the way it is managed.

Although he admits it was a bit of an “eye-opener” when he took on the challenge in 2012, with herd performance below average at 18.52 piglets a sow a year, he wasted no time putting changes in place to improve performance.

Initially, the setup included weekly farrowing in multiple outdoor group farrowing pens, with replacement gilts and boars bought in. However, he has since changed the system, with all farrowing accommodation now consisting of individual paddocks, using Aardvark and Armadillo huts.

He says this has allowed sows to be individually fed to match their requirements and has resulted in fewer litters being abandoned, which was sometimes the case in the previous system.

Replacement gilts are also now home-produced to accommodate the switch to a fully closed herd, which has reduced costs and improved biosecurity.

Gilts and dry sows are housed in large straw-bedded buildings until five weeks before farrowing, when they are moved outside.

This has also helped improve fertility, as the animals are removed from extreme weather conditions, and it allows groups of dry sows and gilts to be fed according to their pregnancy stage, with sows and gilts pregnancy- scanned four weeks after insemination.

Justin has also moved the herd to a three-week batch farrowing system. Sows are now averaging 26.4 piglets weaned a sow a year, up from 18.52. On average, 12.75 piglets are born alive a litter a year, up from 11.1.

He says: “Our sale of pigs has almost doubled; we are now selling 200-220 pigs a week at about 100-110kg, 80% of which are Freedom Foods-assured. They are all sold through Thames Valley Cambac.”

Justin has taken charge of the feeding by switching from buying compound feed for the growers and finishers to milling and mixing diets on-farm. Most of the diet’s components are grown on the 940ha (2,322-acre) estate, including wheat, rye, beans and barley. Oil and pre-mixed minerals are bought in and added to the ration.

He produces specific grower and finisher rations to maximise growth, with pigs averaging about 750g a day from weaning to finish. Justin says using a mobile mill and mixer is saving about £20/t compared with buying in a ration with the same specification.

Pigs are weaned into large straw-bedded tents and are then moved to a barn and littered on straw for finishing. However, about 900 pigs are reared on a nearby farm in straw-bedded yards.

Justin is trying to maintain production by continually improving the genetics and keeping the herd young; the average herd parity is two.

Sows and gilts are a combination of Landrace and White Duroc, and are artificially inseminated with a Hampshire sire line. Gilts are synchronised to bring them into heat at the same time.

Staff are key to the efficient operation, with two additional members of staff on the farm: Jake, Justin’s assistant; and Richard, who works part-time. Both were new to the pig industry, but through careful training, the farm now has two top stockmen.

Justin is a fantastic manager who has made huge improvements in the production and value of this farrow-to-finish pig business since he started at JH Norman and Sons in 2012. He is very organised and is clearly running a well-oiled operation.”

Elanco is dedicated to helping pig producers reduce the use of antibiotics by improving gut health through the use of vaccines to prevent post-weaning diarrhoea in piglets.