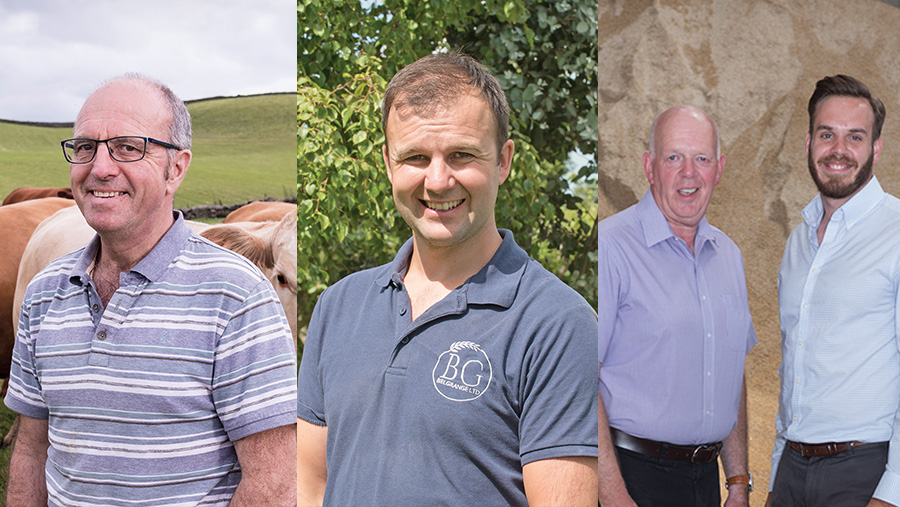 The falling value of finished cattle was inescapable as a topic of conversation for our finalists this year, but each is taking prudent and positive steps to manage the factors under their control, cutting costs and increasing the value of their sale animals. 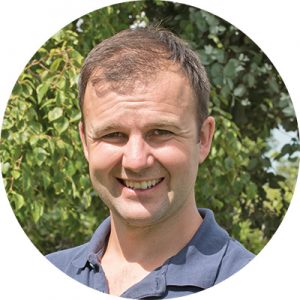 Dunbar, East Lothian
Farming duo Niall Jeffrey and his father Angus have created a low-cost beef production system that makes the most of both the arable and upland ground they farm 25 miles east of Edinburgh.

The 400-head herd of Aberdeen Angus-cross cows are summered at heights of up to 1,000ft above sea level, with the calves brought in to corrals to winter at the lowland farm.

There they are fed a diet of homegrown straw and bruised barley, as well as dark grains and sugar beet pulp, with average weight gain of 1.5kg a day on the intensive ration.

The cows are left on deferred grazing on the drier hill land until close to the beginning of the calving period in March, with the short housing period on a straw-based diet costing just £65 a cow.

Business collaboration
This tightly knit system is complemented by a contract farming agreement, relatively uncommon in the beef industry, which allowed the numbers to expand after a deal was reached to manage a neighbour’s herd.

A share-finishing contract has also been agreed with a specialist finisher to take some of the stores, with income divided between the two parties based on a formula relative to the number of kilograms gained at each farm.

Finishing cattle in their second year are targeted to leave the farm by January, allowing the Jeffreys, along with their three members of staff, to give room and attention to the outwintered cows coming in for the calving season, which runs between March and May.

Focus on finishing
Steers are sold at up to 750kg liveweight, killing out at about 390kg, while the heifers that are not selected for breeding will be sold at about 600kg.

With the likelihood of reduced government support in future, they are keen to cut costs by adding more weight to animals before they come into a shed through improved grassland use and more outdoor feeding.

They hope this will bring down finishing times further, with the average age of a finished animal currently standing at 576 days – down from 643 days five years ago.

The mix of grassland running up to 1,300ft above sea level means cows are inevitably pushed on to less-improved grassland to favour the finishing animals, but they are cautious not to challenge the cows too hard in order to maximise conception rates.

With a large herd to manage, the focus is on breeding a self-sufficient cow with strong maternal traits and good fertility to maximise the weaning percentage.

This led to the introduction four years ago of a Hereford bull to breed the Black Baldie outcross. They are also maintaining a purebred Aberdeen Angus nucleus herd.

Best practice
Despite no caesarean births on the farm in a decade, and falling antibiotics use thanks to a strong focus on good hygiene and colostrum, the Jeffreys say continuing attention to improving herd health is essential.

As one of the Agricultural Engineering Precision Innovation Centre (Agri-EPI Centre) beef satellite farms, they are also enjoying access to the latest technology, which may help streamline production in the future.

This includes weighing crates in cattle pens to improve monitoring of liveweight gain, as well as using a drone to map weed patches in grassland for spot-spraying, which aims to eliminate weeds while preserving clover.

Combining an arable and upland unit has produced an attractive low-cost system that is making the best of native-bred cattle. There is a clear focus on continuing improvement which is being rewarded.

What the judges liked
• Integration with neighbours through innovative contract farming agreements
• Focus on breeding a cow with strong maternal characteristics
• Clear identification of enterprise strengths and weaknesses.

Farm facts
• 1,660ha of land split between owned and managed under contract farming agreements
• Of this, just over 600ha of arable
• Finished cattle sold to Scotbeef. Cattle sold through share finishing contract go to Dovecot Park. 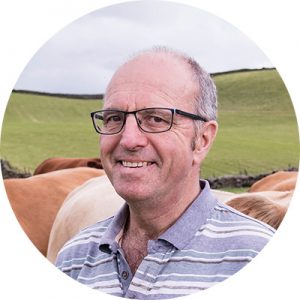 James Dixon, who farms in partnership with his two brothers, Richard and Andrew, and two sons, Steven and Mark, manages 1,200 breeding ewes, 12,000 laying hens and a herd of 220 Stabiliser cows just north of Kendal in the Lake District.

The composite breed, made up of Hereford, Red Angus, Simmental and Gelbvieh genetics, was chosen for its efficiency at turning grass into meat.

Business innovation
After switching from dairying 15 years ago, the farm first invested in the Stabiliser breed to cross with more traditional continental cattle for easier calving.

However, the decision was soon taken to breed the cross-breds closer towards full
Stabiliser genetics, as their greater efficiency became apparent.

The breed’s smaller size allows an additional 20 cows to be kept for the same amount of fodder as the previous larger cross-breds, while heifers achieve their target weights for bulling at 15 months from forage alone.

Cows are calved in a tight spring block, with the season beginning this year on 19 April and ending on 14 June. The calving period is maintained by culling anything that fails to hold to service.

Focus on genetics
Genetic improvement is being accelerated by rapidly bringing through young bulls with higher estimated breeding values (EBVs), with many bred on-farm using embryo transfers from top herds.

The family is also proud to count among its herd the number-one profit-indexed cow in the country for the Stabiliser breed.

Recording cattle performance (vital to allow the society to formulate EBVs) has been significantly simpler since the switch was made three years ago to full EID cattle tags.

While the best of the heifers are retained as replacements each year, the farm also has a plentiful supply of heifers to be sold for breeding.

These are ranked by the society according to genetic purity and sold for a fixed price, with the highest premium paid for those with more than 93% Stabiliser genetics.

“It is a stock-rearing farm, although we sell some fat cattle,” says James. “It is all about those heifers to sell – everything else is a bonus.”

Best practice
All bulls are kept entire, with those that don’t meet the criteria for breeding sold through a scheme established by the Stabiliser Beef Improvement Group and Morrisons.

This pays a premium for cattle slaughtered between 12 and 14 months old that have a carcass weight of 300-400kg, conformation grade R or better and a fat class of 3 or 4L.

The farm is in a high-rainfall area, which means cattle are typically housed from mid-September to avoid poaching, but the benefit of the grassland through the summer is being maximised by reseeding at least one paddock each year.

Grass growth is also supported by the nitrogen-rich hen manure, as well as cattle manure, which has allowed purchases of phosphate and potash to fall to nil.

Using the Stabiliser breed has taken this excellent upland farm to the next level by maximising output in a challenging, high-rainfall area. The focus on rearing breeding livestock has also added significant value.

The judges liked
• Increased cow numbers at no additional cost of resources by using a breed with a lower mature weight.
• Using EBVs to make informed decisions when selecting progeny to breed from.
• Adding value to output by marketing breeding livestock back through the society.

Farm facts
• Farm size 440ha, with half tenanted and half owned
• Land rises from 500ft to 1,400ft above sea level
• Average rainfall is 80 inches a year
• Sheep flock predominately Swaledale.

In numbers
• 96% of cows scanned in-calf last year
• Eight-week calving period
• 80% of land classified as in a Severely Disadvantaged Area
• 12-14 month-old finishing bulls are sold under Morrisons scheme to earn premium
• 7ha under reseeding this year to improve grassland. 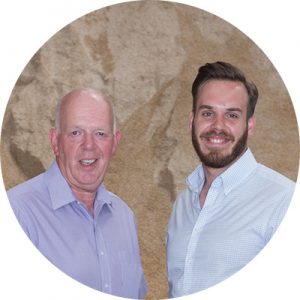 Situated less than 14 miles from the south coast, the home farm sits near the end of a carefully crafted cattle supply chain, which they have named a modular farming network.

It starts with black-and-white steer calves being bought from dairy farms across the region by an experienced calf rearer and reared to five months of age.

Business innovation
They are then bought by the Sturmers and transferred to one of three independently owned growing units.

These work in partnership with the Sturmers to rear the calves through until about 90 days away from their finishing weight.

At this point they move to a finishing unit, one of which is the Sturmer home farm, to take them through to about 600kg, before they go to Dunbia for slaughter aged about 14 months. Another two farms are involved to grow some of the feed required.

This model of finishing was Michael and Ian’s solution to the problem of how to build an economically sustainable beef system that produces beef that consumers will value.

This came to be viewed as too high-risk, with the store price not tracking the fat price, and cattle performance too unpredictable as consistent animals were unavailable.

When Ian returned from studying to join the business in 2012, they embarked on market research by speaking to chefs, supermarkets, processors and other experts.

What they learned is embedded in the system they have built, including the decision to select dairy-bred calves for their greater performance consistency and superior meat marbling, rather than beef-bred calves.

At the same time, market volatility has been reduced through operating at increased scale in an integrated system where more costs can be accurately forecast as well as reduced.

Despite finishing 4,680 animals a year, they say their success is based on being able to closely monitor the performance of all cattle and replicating what works across all holdings.

Best practice
Cattle are grouped into lots of 45 across the farms. Feed intake – one of the key measures of performance – is monitored for each pen every day, with the aim to deliver a ration that is ad-lib, but cleared by the cattle.

Each growing unit farm supplies its own forage, with the aim to produce quality maize and grass silage which is supplemented by barley, biscuit meal and maize distillers grains to yield an average growth rate of 1.4kg/day.

This is increased to 1.99kg/day on the finishing farm, by tweaking the ratio of concentrate to forage.

Addressing consumer concern about the provenance and environmental impact of red meat, they have taken steps to ensure all livestock has lifetime quality assurance and lifetime data on feeding.

They are also contributing to research which aims to improve the selection of cattle for eating quality traits, such as meat tenderness and colour.

Michael and Ian have built an admirable business that puts the customer first. Meeting these requirements by bringing farming businesses together is clearly benefiting the whole supply chain.

“I would like to recognise the achievements of the finalists who have demonstrated a passion for innovation, an attention to detail and an unwavering commitment to delivering a quality and sustainable product.”