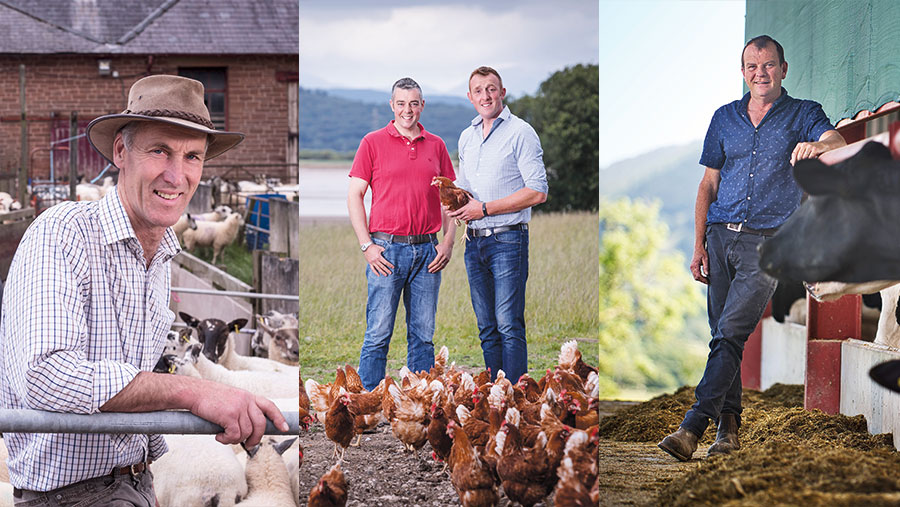 Building a more resilient business which is better able to weather market volatility is the key driver for our three finalists this year, with multiple profitable enterprises putting the candidates in a good position to farm without subsidies post-Brexit. 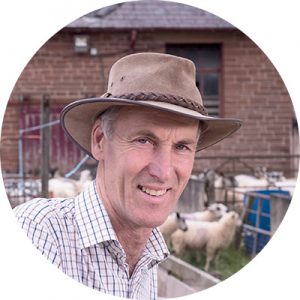 Aikbank Farm, Calthwaite, Penrith, Cumbria
When farm manager James Turner took over Aikbank Farm in 1987 the farm was in debt, a legacy of a series of bad decisions, bad luck and a wet harvest the previous year.

The Cumbrian Brackenburgh estate had consisted of more than 3,000ha but by the time James took over, just 161ha of arable cropping was being farmed in-hand.

Meticulous attention to detail helped James turn the business around in only a few short years, with his impressive management capacity building several profitable farming enterprises while also taking the farm’s environmental credentials to the highest level.

Shape of the business
After having to work harder and harder with Holsteins, the farm has focused in recent years on producing a “modern cow” which is productive, efficient and healthy.

This is being achieved through a three-way cross of Holsteins with Danish Red, which James’ sourced direct from Denmark, and Fleckveich.

The herd of 220 cows is producing 8,500 litres per lactation, with nearly 2m litres a year sold to Arla on an aligned contract with Morrisons.

Slurry is seen as a useful resource for the grassland, which supports 850 ewes, and the arable operation.

Aikbank farm was the first farm in Cumbria to be crop assured, with winter wheat and winter barley being sold through the northern England grain trading co-operative, which supplies local feed mills.

About 85% of cropping is min-tilled using a Horsch disc drill after a light cultivation.

Alongside his nearly 10t/ha wheat crops, James his heavily involved with research work, both on the crop and environmental side.

As well as hosting cereal and fodder beet variety trials for Agrovista, which draw more than 100 attendees each year, he is also working with Lancaster University on a range of environmental projects focusing on areas such as plastic degradability in soils.

Challenges
Both the cereal and dairy enterprises were suffering from a chronic lack of investment when James took them over, with the dairy stocked with 110 low-quality Holstein cows in poor facilities.

Meanwhile a lack of storage on the cereals side forced him to sell at harvest rather than being able to access the best prices.

A new 2,000t grain shed has revolutionised grain selling on the farm, with wheat sold into Penrith achieving a premium.

A major restructuring of the dairy facilities and a below-ground slurry store have allowed access to higher milk price contracts, with the extra margin being used to hire staff to help across all enterprises when needed.

Achievements
With the different parts of the business running like a well-oiled machine, James has been able to really push the environmental side of the farm, which is where his passion lies.

The farm has secured both an Entry Level and a Higher Level Stewardship Scheme, bringing in a hefty environmental payment which is likely to stand the farm in good stead if BPS payments are replaced with a scheme based on producing public goods.

James’ environmental work has already seen him awarded the Tye trophy in 2018, an award recognising environmental improvements in commercially successful farms, and he is a finalist in this year’s Silver Lapwing awards.

The level of detail at which James manages the different facets of his business ensures he is always in the best position to take advantage of opportunities as they crop up, while his passion for the environment is unparalleled.

What the judges liked
• Fastidious over the management of the estate, leaving no stone unturned
• Excellent staff management, utilising extra milk margin to invest in an assistant dairyman
• Serious commitment to preserving and improving the environment through a whole host of schemes
• Achieving consistently high starch levels in whole-crop silage by sowing winter oats.

Will and Simon Case 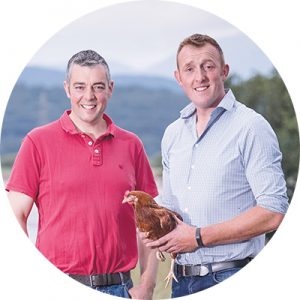 Brothers Will and Simon Case have turned this difficulty to their advantage, creating a value-added product from the salt marshes that surround the farmhouse, one of many enterprises crammed between the hills of the Lake District and the sea.

By diversifying the family farm from producing fat lambs and store cattle, the pair have ensured the business can support both of them while also weathering any market volatility and the potential loss of subsidies.

Shape of the business
During six months travelling around New Zealand, Will decided free-range hens would be the best way of boosting the profitability of the farm.

After initially struggling to find a local packer, the pair secured one in Kendall and designed their own shed for the first 5,000 birds in 2005.

A second shed was built in 2007, taking capacity to 12,000 birds and making the enterprise the most profitable part of the farm.

About half of the farm’s lamb crop is sold through supermarket chain Booths and local butchers as “saltmarsh lamb”, forming the backbone of the sheep enterprise.

However, having three different sheep enterprises helps spread the risk, with a proportion of the lamb sold through the livestock market, other animals sold as pedigree breeding Texels, and the rest being value-added lamb.

The majority of the beef cattle are sold as stores at the local market, with a number of Saler suckler cows being sold for breeding with Charolais calves at foot.

The pair buy two or three cows a month to maintain the fully-housed dairy herd. The 100 cows are milked robotically, with milk sold on an ingredients contract to Yew Tree Dairy.

Challenges
Although the farm, which is a mixture of owned and rented land across two holdings, had a dairy in the 1960s, the business had focused exclusively on fat lambs and store cattle in the brothers’ lifetime.

However, a lack of experience was not enough to put Simon off from diversifying into dairy at the second holding, Robbs Water Farm.

The decision was made on the back of strong milk prices, but after selling 63 cows and calves to buy the dairy herd and two second-hand robots, milk prices plummeted to 14p/litre.

Despite that difficult start, the dairy business is more than holding it’s own among the different enterprises, although the other elements of the business do help it weather the volatility of the contract.

Achievements
Running such a complex business is only possible because the brothers employ a broad-brush approach, safe in the knowledge that each enterprise stacks up individually.

Such diversity means the pair will be able to farm profitably without subsidies when they are scrapped, and also survive volatility, from both outside factors and those closer to home.

The farming operations were able to continue as normal last year when Simon suffered a period of ill health, needing time off for treatment.

Now back on track, the pair have big aspirations for expansion; increasing the hens to 32,000 by investing in a multi-tier housing, and doubling the dairy cow numbers.

Ultimately the plan is to split the business to allow the brothers’ next generations to carry on in farming, if they so wish.

Lack of previous experience certainly hasn’t stood in the way of Will and Simon, allowing them to create a hugely diverse business which collectively stacks up and means they are not reliant on subsidies.

What the judges liked
• Are not afraid to take risks and get into areas without previous experience
• Very resourceful, and ensure they get maximum value from their assets
• Hugely diverse business model, including value-added products
• Simple but effective system allows for broad-brush approach

Oswestry, Shropshire
Succession is at the forefront of Martin Evans’ mind in every decision he makes, with a recent move into poultry helping to future-proof the business for both of his sons.

It is a typical move for Martin, who never misses an opportunity and knows how to make the best of both his assets and his staff base, with many members treated like family.

Added to the existing dairy and contracting businesses and the growing land base, Martin’s approach means this already-profitable business is in the best position to survive any future volatility.

While Martin is still very much in the driving seat, two of his sons have come on board to manage the dairy and contracting enterprises, and both elements have gone from strength to strength.

Shape of the business
The injection of fresh blood into the dairy business five years ago, when son James took over the helm, has brought increased profitability through improved forage quality after a switch to multicut silage.

With experience from a placement year in dairy nutrition, James has overhauled the system at home and is reaping an increased grass silage energy content of 2.5MJ/kg fed, and an increase in protein of nearly 5%.

Despite serving on the Arla board of directors for 12 years, the farm was being penalised for its low fat and protein figures, so a switch to Müller 12 months ago was seen as the best option for the future.

Second son Josh has taken control of the contracting business, operating three foragers and a sprayer across 6,100ha within a 500-mile radius.

The team manages foraging, and grows maize, rye and wheat.

Keen to have a slice of a market which is growing at 4% a year, two years ago the farm moved into broilers after Josh spotted an opportunity.

Two sheds were built in-house to keep down costs, and now house 100,000 birds, with the farm on its 13th crop at the time of judging.

Twice the poultry operation has achieved a European Production Efficiency Factor of more than 400 – a reflection of its technical excellence.

Challenges
Land continues to be the farm’s biggest challenge. Martin’s parents’ farm was a 24ha council holding, where he milked while also farming beef and sheep on a 15ha tenancy of his own.

Martin eventually secured the dairy on 72ha private tenancy, and started out in contracting, allowing him to build up to a position where he could buy land of his own.

The first piece of land was bought in 2001 and the business now owns 151ha, with a further 280ha tenanted.

Savvy investment in the dairy facilities at the dairy farm has helped improve cow performance while also helping Martin extend the tenancy back to its original 40 years.

Achievements
While Martin has focused on future-proofing the business, his sons have proved themselves worthy successors.

In just two generations the dairy enterprise has seen massive improvements, not just in nutrition and yield, but also fertility.

The average age at first calving has been reduced from 28 months to just 23.2 months. The health of the herd is also improving, with the farm being bronze certified BVD free and lameness being tackled with a second cubicle shed.

Martin is one of the most passionate and driven people we have met, but focuses his unbelievable energy on profitability and ensuring his sons, who are already making their mark in the business, will be able to succeed him.

“Leading mixed farmers use the resources available in a flexible manner, to maximise sustainability and profitability. Manitou is extremely proud to sponsor the Mixed Farmer of the Year category 2019. Good luck to the three finalists”