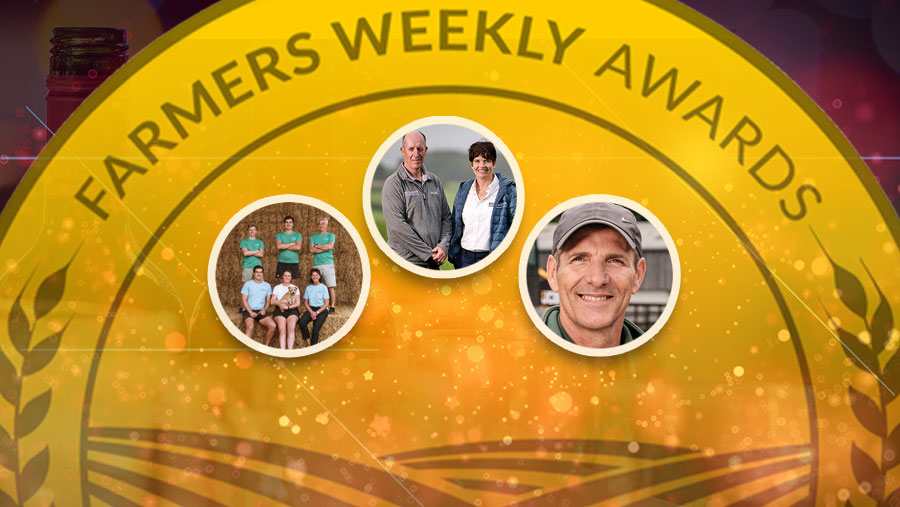 This year’s finalists all show a passion for sustainable farming practices, seeking the perfect balance of arable and livestock farming and complementary diversifications.

The judges visited each finalist for a three-hour visit and a tour of their setup. The mixed farmer judges are: 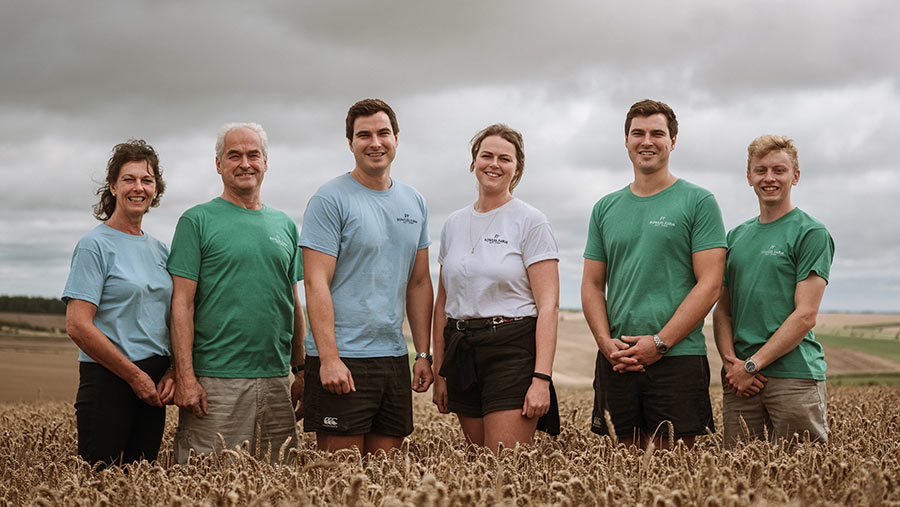 Running a mixed arable and livestock farm in the Berkshire village of West Ilsley, the Carlisle family pride themselves on their close-knit family business, where a new vineyard was recently added to their mix of enterprises.

Peter and Sandra, together with their identical twin sons Will and Tom and daughter Georgie, manage more than 600ha of arable and grassland on Rowles Farm, and contract farm an additional 460ha.

Alongside day-to-day life, the family run a social media page, sharing their farming ways with the public.

On the livestock side they have a breeding flock of 700 North Country Mule ewes and buy in 600 hoggs, along with 50 store cattle, each year, all of which are run in conjunction with Peter’s brother David and his daughter, Tory.

The separate enterprises complement each other well, helping balance the workload throughout the year, with livestock making efficient use of the farm’s permanent grassland, rotation and straw as well as grazing-off stubble turnips and cover crops.

Cropping includes milling wheat, spring and winter malting barley, winter oilseed rape and stubble turnips for the sheep, while winter linseed made an appearance for the first time this year.

Milling wheats average 11t/ha. The variety Zyatt was grown this year, with 290kg/ha of N applied in four hits, while a four-spray fungicide approach tackles the major disease threats of septoria and yellow rust.

Winter and spring barley average about 8.5t/ha and 7.5t/ha, respectively. A cover-crop trio of phacelia, vetch and radish precedes spring barley, acting as a soil conditioner and additional sheep fodder.

The family use a Horsch Avatar direct drill to sow all of their crops, including 220ha of oilseed rape. In a bid to shield the OSR from cabbage stem flea beetle, barley stubble is left taller and crops are sown with buckwheat as a companion crop.

“Another plus of using the Horsch drill is that we can apply fertiliser down the spout, placing it right next to the seed to kick-start emergence and eliminate additional tractor passes,” says Tom.

Lambing takes place indoors during February and March, using a mix of Suffolk, Texel and Charolais terminal sires, with a scanning percentage of 195%.

“Lambing is certainly a labour-intensive period for us but it brings all the family together, where we work as one,” says Will.

This season, the first lambs were sold at £110 each, averaging 36kg, and were fattened off grass, with no creep feed.

After monitoring the farm’s climate over the past four years, it was decided to plant a 3.5ha vineyard (16,000 vines) of Bacchus and Pinot Noir on the light loam over chalk soils.

“We aim to harvest our first crop of grapes in three years and sell to UK winemakers as part of a co-operative, with the possibility to produce our own bottled wine and add tourism-based elements in the future,” says Georgie.

With the farm located at the very heart of a rural village, tapping into the tourism market certainly offers potential, but the family also play an active role in community life and are affectionately known as West Ilsley’s fourth emergency service.

Promoting British agriculture and reaching out to a wider audience is something Tom, Will and Georgie are particularly keen on, which is why they embarked on their social media journey.

Two years on from making their Instagram account (@rowles_farm) they have nearly reached 10,000 followers and demonstrate farming in a positive light.

Rowles Farm is a fantastic example of a mixed farming family business. All the family are involved in various aspects of the business. The energy they have for each enterprise is infectious 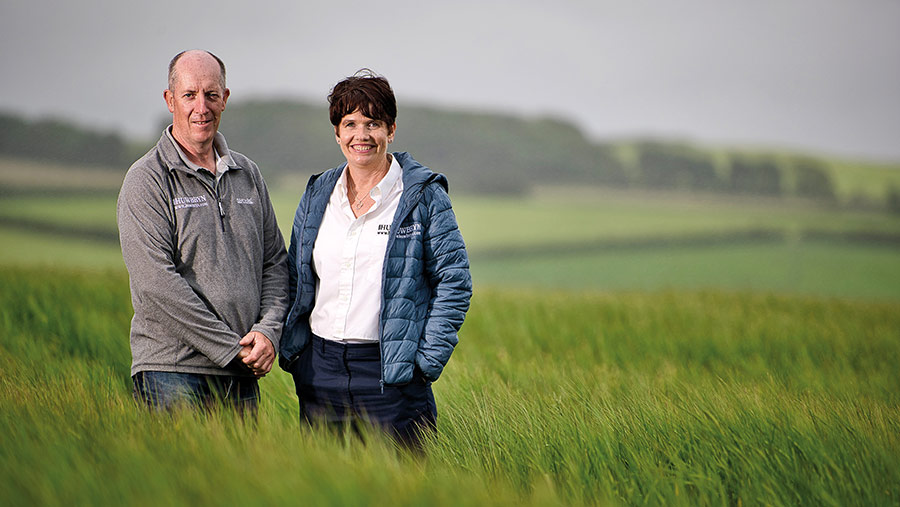 Simple and sustainable is the motto for Huw and Meinir Jones, who farm beef and arable alongside a diversified pet bedding business and holiday lets in Ceredigion, Wales.

Operating a dry coastal farm on the edge of Cardigan Bay, the pair maximise their ability to outwinter their 80 Salers-cross spring calving suckler cows on kale, turnip or forage rape in order to save on housing costs. Progeny are then taken through to fat.

Growing a further 25ha of spring and winter barley, they use the grain and straw on farm, optimising the use of home-grown cereals in return for nutrient-rich manure to help create a sustainable rotation.

Cows are housed indoors only for calving, using either Salers or Hereford bulls to produce a docile easy-calving cow, to be crossed with a top 1% Charolais bull for prime fat cattle production.

“Scanning results are 91% and cows calve in a strict 10-week period,” says Huw.

Cattle run on a rotational grazing platform in three groups, which has been a real game changer, allowing the couple to control intakes and quickly identify any shortfalls or excess growth. The best grass fields now grow more than 11t DM/ha, with no artificial fertiliser.

Helped by the precision in grass growth, with measurements taken every two weeks during the growing season, there is no requirement for cattle wormer as pasture burdens are kept significantly low.

Fat cattle are sold direct to the abattoir, reducing stress before slaughter and enabling this year’s bulls to kill out at 55% to 58%, averaging 340kg deadweight, with prices up to £4.15/kg for U grades.

Farming on such light sandy soils, Huw identified that organic matter levels often limited arable yields, prompting him to ditch the plough and move to direct drilling in 2010.

All crops, including grass are now drilled using the 3m Simtek, with organic matter levels now measuring over 10%.

But even with the adoption of direct drilling, Huw and Meinir took the decision to up cattle numbers to 80 by rearing their own replacements and halve the arable area to 25ha as a means of promoting the farm’s long-term sustainability.

After carrying out a farm carbon audit, accounting for the entire farm business, pet bedding enterprise and holiday cottages, the drive to improve soil health has paid off,  with a carbon negative score of -75t.

Huw’s vested interest in value-added enterprises inspired him to diversify into a pet bedding enterprise back in 2004.

What started as cold calling at local pet shops has now developed into a thriving business where Huw and Meinir grow, pack and deliver throughout south Wales.

The business fits exceptionally well within their farming enterprises as any hay or straw which does not meet the desired standard is used back on the farm.

Huw also has an impressive ability to manage and monitor farm performance. He has a great awareness of costs and uses the resources he has to their optimum, in a simple and sustainable manner.

He also takes great pride in training up the next generation, with a number of university placement students having worked on the farm over the years.

Too often we think big is best and this business is an excellent example of the opposite. A smaller farm in terms of acres, generating healthy profits by focusing on the detail and developing a point of difference with their diversified pet bedding enterprise 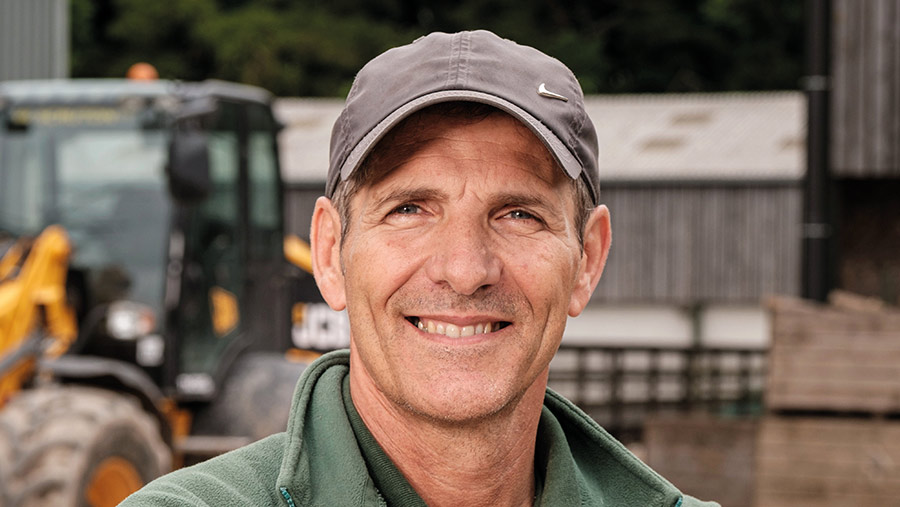 Paul Temple describes himself as not only a mixed beef and arable farmer but also a soil scientist in the making, as he focuses on improving soil biology across his East Yorkshire medium clay loam land.

With a six-year rotation in place at the tenanted farm, crops benefit from organic manure applications from the 550-head beef herd, requiring no bought-in P and K fertiliser.

But with subsides shrinking, Mr Temple decided something had to change which is why he doubled cattle numbers and went down the no-till establishment route, reducing cultivation passes to get his soils working for him.

The shift to conservation agriculture has had many positive impacts, with both machinery and labour costs cut by a third and overall N applications on track to be reduced by 25%.

Insecticides are being phased out and fungicides are used sparingly as Mr Temple looks to make the most out of soil biology, where organic matters have risen to 7-8%.

“We have not used a T0 spray for four years and just apply two main fungicides at late T1 and T2.5,” he says.

Always producing to a marketing plan, crops are never established purely on speculation.

Wheat is grown for seed on contract, barley for home consumption and vining peas are grown for Swaythorpe Peas.

All crops are established with a Weaving direct drill which replaced the plough, power harrow and Vaderstad drill five years ago.

“One challenge we face is making vining peas work consistently under no-till establishment,” he says.

Much like the arable enterprise, beef cattle are produced to a specific store market.

“For our livestock marketing we have used a variety of direct marketing platforms with repeat buyers for our store stock.”

Stabilisers have been the breed of choice at Wold Farm for many years due to their low cost, good fertility and maternal traits.

Improving cattle infrastructure to optimise efficiency, safety and animal health was a priority when the suckler herd was doubled to 240.

The farm now sets its sights on 300 sucklers managed with the same level of labour, with the ultimate aim of fattening on farm and working with the local abattoir.

Cows calve from February to mid-April, when the arable enterprise is quieter. Cows with calves at foot then graze rented permanent pasture grassland a maximum of 10 miles from home, where Mr Temple has designed easy-to-use handling facilities on off-ground.

Calves are weaned at 300-340kg and fed a total mixed ration, with daily liveweight gains of 800g.

The 40 best-performing heifers are kept as replacements to ensure good herd performance, accounting for growth rate, dam’s performance and temperament.

The farm is currently in Higher Level Stewardship with educational access for schools and colleges, and Mr Temple is particularly proud to offer many young people their first opportunity of work and responsibility.

Paul is an ambassador for the industry. His focus on business management, soil health and market understanding is exceptional. The wheat yields on his farm are quite incredible considering the level of nitrogen he is applying

Cawood is delighted to be sponsoring the Farmers Weekly 2021 Mixed Farmer of the Year award. As a key supplier to both arable and livestock farmers across the UK, recognising the very best of British agriculture in complementary operations that form one sustainable farming business is very important to us. We would like to wish the very best of luck to all finalists and we look forward to celebrating alongside our customers and colleagues on the night.