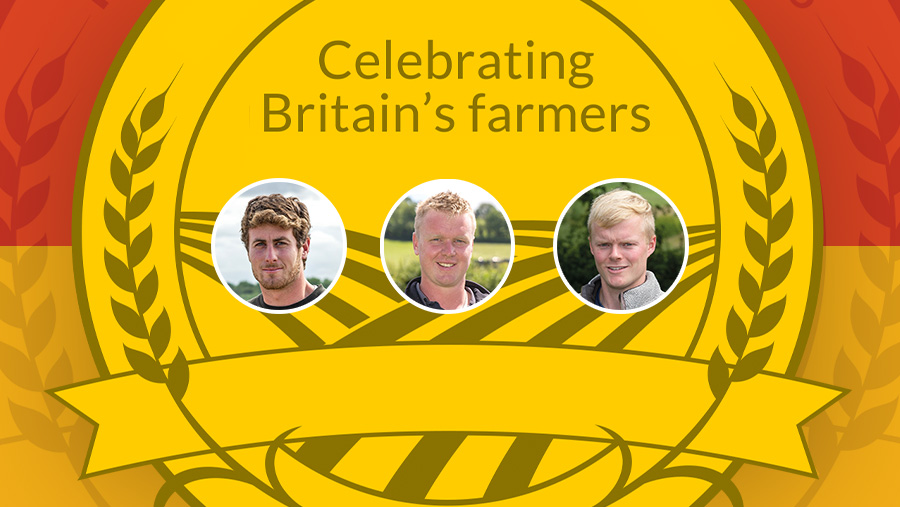 A passion for livestock, agriculture and building a prosperous future, both personally and for their sector, connects this year’s three finalists.

All have created and expanded successful businesses in a variety of ways, after taking on full responsibility from a young age.

Future challenges include changing farm policy, decreasing subsidies, succession, personal progress and a new emphasis on the environment, but they remain optimistic.

Armed with confidence from early successes, the desire to keep learning and strong support systems, these young farmers are determined to succeed.

The 2020 Young Farmer of the Year finalists

The judging team spoke to the finalists over a video call and visited their farms for an interview and tour.

The Homestead Farm, Staffordshire
Sam Hall has created a successful free-range egg business while being in education and taking on management responsibility on the family farm.

The threat of avian influenza during the business’s formative years encouraged the implementation and maintenance of a strict biosecurity plan.

This combined with tailored vaccine programmes for incoming pullets and investment in water dosing equipment and water quality has all helped improve the birds’ health.

Hugely popular in the local area, Sam has ambitions to increase the amount of produce he sells at the farm gate and build up the dairy herd numbers.

Getting started
Sam grew up on his family’s mixed farm and started his own free-range egg business when he was still at school.

He started by selling a few eggs to his neighbours at eight years old, and then began selling retail at age 13 when he owned 100 hens.

Over the next few years, he built this up by selling to local businesses, and by the time he was 18 he had about 750 hens.

After completing a three-year Level 3 diploma in agriculture at Reaseheath College, he returned to work on the family farm with his father. He started to increase his hen numbers again due to local demand, and would used his evenings to grade eggs and sort orders for delivery the next day.

Current business
Sam currently has about 2,700 hens, laying 1,000 eggs a day. This will increase to about 1,900 eggs when the recently added 1,500 birds settle into the flock.

He keeps hens of different ages in order to produce eggs year round, and has also started selling duck eggs and coloured eggs, due to customer interest.

“I do as much as I can myself to keep costs down, like using secondhand equipment and putting sheds and polytunnels up myself,” he explains.

“I used to do the labels for the egg boxes myself off the computer, but a few years ago I got a company to do bespoke labels instead, which makes it quicker, looks smarter and helps build a brand.”

Sam also owns about 100 ewes, which lamb in late March, and has bought about 6ha with his wife using a business loan.

Separate to his hens and sheep, Sam works on the family farm and has recently taken over the management of the dairy enterprise from his father.

Going forward
The farm used to have a herd of 80 cows but is now down to 30, and Sam wants to increase these numbers, as well as renovating the old parlour.

He also plans to work on lamb and beef boxes and increase the number of products sold from his on-farm stall. What’s more, he is considering adding a milk vending machine, which he has already tested by selling other people’s milk.

As future farm policy and trade deals come to pass, Sam hopes the hen business will help support the rest of the farm.

“The farm is reliant on the basic payment subsidy, and that’s partly why I want to increase cow numbers, but the hen business is already set up without any subsidy and has brought another source of income into the farm,” he says.

“Food imports are possibly a threat, they could affect beef sales and that will have an effect on the farm’s finances. I’m not sure if it will affect the eggs because of the local market, but it could if lots come in.”

Sam has shown an aptitude for business at a very young age and translated that into a successful business. He remains hard-working, ambitious and keen to learn more.

Manor Farm Bungalow, Dorset
Bertie Newman has full responsibility for the management and everyday running of an agricultural business spread across 607ha in blocks around Dorchester. 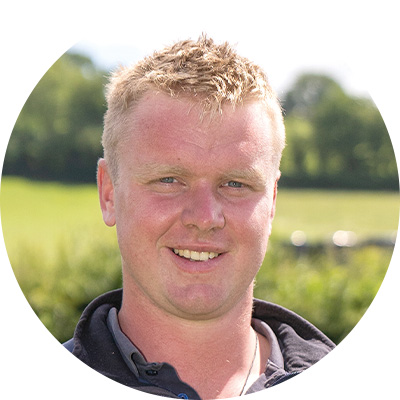 The organic farming system includes suckler beef, sheep, dairy beef and contracting, and Bertie has ambitions to expand this in the near future.

He has made multiple changes to the livestock enterprises since taking over control two years ago, and is driven by a desire to improve efficiencies and resistance to running at a deficit.

In addition, he has resolved to learn more about agriculture’s environmental implications and how carbon accounting fits in with future farm policy.

Getting started
Bertie completed an advanced technical extended diploma in agriculture at Sparsholt College before working on several farms in New Zealand and Australia for six months.

In 2017, the family bought the 132ha Manor Farm and Bertie became a partner in the business alongside his parents, bringing his cattle with him.

Current business
As well as Manor Farm, the business rents about 475ha in blocks on various grazing licences and farm business tenancies.

In 2018, Bertie took on sole management of the total 607ha when his father started running a dairy cattle business belonging to Bertie’s grandfather, who had become ill.

With the cattle, he has replaced purebred Angus with dairy cross Angus to improve early life nutrition and moved from year-round calving to autumn and spring blocks.

The main aim with the sheep is to reduce the ewe overheads, and make lamb production more efficient by producing the same number of lambs from fewer ewes.

Though historically the business only sold lamb deadweight, Bertie is now selling some live as stores, which has made the business more flexible, and allows the team to react faster to the market.

He also introduced two new enterprises: contracting and dairy origin beef. These were specifically chosen to make use of the available resources and to improve cashflow. In autumn 2019 he set up a TB isolation unit.

Going forward
In five years’ time, Bertie hopes to be selling 500 of 1,000 cattle each year, as well as selling 1,200 lambs a year from fewer ewes.

He plans to move to spring block calving only and to have more detailed recording of data, alongside working with precision livestock trading and analytics tool Breedr to optimise the system.

Though he enjoys working with his staff, he finds managing people challenging and intends to take a business management course to learn new techniques.

He also aims to focus on better marketing of organic grass-fed beef and lobbying organic groups to share the message of the product’s quality.

Already used to low stocking rates with his organic system, Bertie is keen to work on reducing the business’s carbon footprint while keeping it as productive as possible.

“I’m happy to plant trees if that’s going to pay me more than grazing, but it has to pay its way; I can’t just do it for fun,” he says.

“If BPS disappeared completely, it would be hard for a year or two, but I could do it and I think it could open up some land and opportunities for other farmers. The key is making work whatever best suits your farm.”

Bertie has taken on a lot of responsibility and understands his business to the last detail. Alongside this, he is involved in the local community and keen on engaging with the public. 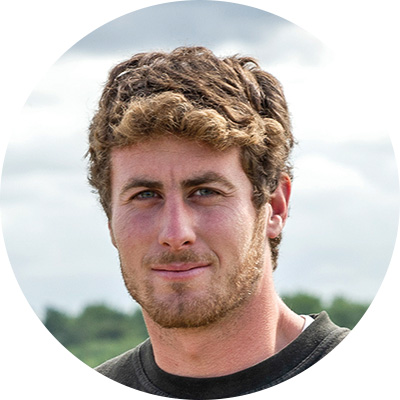 He works with three full-time members of staff to breed high-quality pigs and produce thousands of piglets, supplying BQP.

Having taken on the business suddenly following a family tragedy, he had to find his feet quickly.

Now, Adam is happy with where he is and what he’s achieved and is looking forward to the next challenge of starting a diversification project.

Getting started
Adam completed a national diploma in agriculture at Easton College and returned to work with his father, who had set up his own pig unit when Adam was a teenager.

When his father was diagnosed with cancer, Adam started to take care of the day-to-day management of the two pig herds until the decision was made to sell the smaller herd.

Sadly, in 2018, Adam’s father passed away and he took on full responsibility for the business.

“It was a hard two years; I wouldn’t wish it on anyone and you don’t know what you’ve got until it’s gone,” he said.

“I was chucked into the deep end and I learned a lot about the business, but I regretted not asking more questions when he was here.”

Current business
Adam runs about 1,250 sows across 53ha of rented land, moving every two years to fit in with his landlord’s arable rotation.

Producing his own gilts ensures the farm has a continuous supply of good quality females, keeps the herd young and reduces the risk of incoming stock bringing diseases.

He is two years into a six-year contract with BQP, which pays him per piglet.

Keen to use technology and updated equipment to improve efficiency, Adam’s team record information on iPads, rather than relying on pen and paper.

“I return the fields to how I found them, we’re completely self-sufficient with that because we’ve got all the kit,” he says.

“I’ve also invested in new huts so less repairs are needed, and this has improved the conditions for the sows and the staff.”

Installing farrow feeders and long troughs across the farm, instead of feeding on the ground, has reduced feed wastage by about 8%. This has also resulted in fewer birds visiting the unit, which in turn helps with biosecurity.

Going forward
Adam is in the process of buying a 4ha block of land, with plans to build a home and start a diversification venture, such as a livery yard or holiday lets.

In five years’ time, he hopes to be able to expand and for his day-to-day work to be simpler and even more efficient.

His biggest concern in the pig sector is African swine fever potentially reaching the UK, and he sees his biggest challenge as achieving planning permission.

“I have done the biggest challenge; I’m never going to face one as big as that again,” he says.

“It will be an achievement if I can get the house built because I’ve always said I’d like to do that.”

Adam says he would recommend working with pigs to anyone who likes working with animals, and advises spending money on good, reliable equipment at the start as it will save time.

Adam is a confident and competent pig breeder and herd manager. He took on responsibility for the business at a difficult time and has worked hard to make it successful.

“Attracting and allowing young people to thrive in this industry is about solid foundations and getting the basics right. That means focusing on a quality product and being clear about where we’re going and how to get there.”