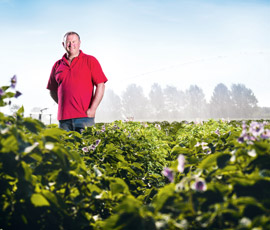 Potato farming at any level is a stressful business, so looking after 1,200ha of other people’s spuds would send anyone’s blood pressure rocketing into the red.

Yorkshire contractor Philip Clappison has got the job sorted, though. “Over the years I’ve built up a reputation for getting the job done, often in extreme conditions,” he says. “I never give up and I haven’t failed to get a crop in or out of the ground yet.”

This grit and determination has helped Philip secure contracts with potato-producing big boys such as Branston and Albanwise. But there’s more to his expertise than just getting the crop in and out of the ground. His knowledge of the potato crop is second to none and this means he can spot potential disease or quality problems before they get to the store.

“I treat everyone’s spuds as if they’re my own,” he says. “I’ll never lift them without considering their condition.”

Another secret to Philip’s success is the fact he isn’t afraid to run older equipment. By paying a fraction of the new price he has built up an impressive fleet of potato equipment, including 10 destoners and 10 harvesters.

That means he’s got the resources to get the job done, whatever Mother Nature throws at him. And when others have been forced to throw in the towel, Philip has always delivered.

Running older kit can be a risky strategy, but Philip’s fastidious approach to maintenance and his incredible parts store ensure he keeps going.

“If you keep on top of the maintenance there’s no need to keep changing your equipment,” he says. “A well-maintained secondhand lifter will be more reliable than a badly maintained new one.”

As well as his day-to-day spud-growing duties, Philip has found time to innovate. When he saw an end to the use of sulfuric acid for burning down potato tops, he decided to come up with an alternative solution.

“Philip has created a fantastic contracting business based around the potato crop. His great resourcefulness and dedication have enabled him to gain a reputation for efficiency, quality of work and, most important of all, delivery.”
Philip Wynn
Wynn Business Partnerships

Working closely with Grimme, he helped develop a flail-and-spray system for chopping and desiccating potato tops in one pass. The system was so successful that Philip is now covering 2,000ha with it and Grimme has put it into full-scale production. He’s also added combining, spraying and muckspreading to his list of services.

He’s able to distinguish a good business opportunity from a bad one, too. For every job he works out his costs, sets a target profit and analyses the job afterwards to make sure it was worth doing.

Even when the figures didn’t stack up to carry out the work on his own farm, he was able to take the decision to bring in another contractor.

“Put simply,” he says, “I always ask the question: Does this make money and does it look like it will make money in the future?”