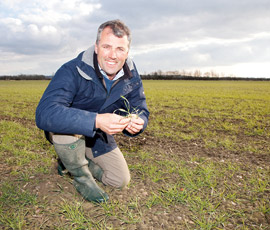 
A selfless act of generosity by Lincolnshire grower Andrew Ward, who launched a campaign to get free forage to snow-hit farmers, was a shining example to us all.

When the worst March snowstorms in more than 50 years crippled hill farmers and decimated feed supplies, Andrew decided he couldn’t sit back and watch his fellow farmers suffer while he had fodder in the barn.


After watching devastating TV news footage of livestock farmers in upland areas losing hundreds of sheep during the lambing season, he launched a forage donation scheme that became known as Forage Aid.

The project, which started in April, rallied dozens of farmers and suppliers across the country to donate forage to struggling livestock farmers in Cumbria, Wales, Devon, Derbyshire, Northumberland and north Yorkshire.

Andrew, an arable farmer who farms 730ha at Glebe Farm, Leadenham, started by donating his own fodder.

He sent 50 bales of his own unsold haylage to Cumbria, but he quickly realised this wasn’t enough. He contacted Farmers Weekly, used his Twitter account and spoke on local radio to appeal for help from fellow farmers, hauliers and agricultural suppliers.

Andrew started receiving messages from farmers around England all wanting to donate fodder. After the BBC featured his appeal on The One Show in May, donations doubled.

His biggest problem was logistics, but he overcame this by seeking help from generous farmers and haulage companies, who donated their vehicles, drivers and services to transport fodder many miles for free (see “Major contributors and supporters of Forage Aid”).

Lorry loads of hay, haylage and silage left Lincolnshire for Cumbria at the end of April. Others followed from counties including Berkshire, Essex, Kent, Norfolk and Northamptonshire.

To date, the Forage Aid charity has donated more than £93,000 worth of forage to about 240 of the most hard-hit livestock farmers.

Farm leaders have praised the unity and solidarity of British farmers, as hundreds of tonnes of fodder moved from east to west to help farmers get through tough times.

Last month, Andrew contacted Farmers Weekly to thank the 56 people and companies who had donated feed, transport and money to the initiative. “I’m immensely grateful. I couldn’t have done it all on my own,” he says.

Farmers have telephoned him in tears, saying the scheme saved their businesses and families from financial ruin.

He has since visited some of the farmers himself to see how Forage Aid has helped. Some told him the only thing that kept them going through tough times was knowing that others cared enough to send feed.

Rhodri Evans, a cattle farmer in Bala, north Wales, who received 30 silage bales and six straw bales to feed his cattle, says: “I’ve got nothing but praise for Andrew. As an arable farmer he has enough problems of his own, yet he spent so much time trying to help us out.

“It was a fantastic thing Andrew started – and he carried it through to the end. I made a friend for life.”

“This was a selfless act to help farmers in another sector, in other parts of the country and a true demonstration of farming coming together as a united industry.”