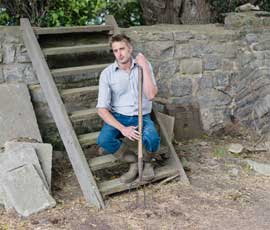 Whether you’re a farmer, a farmworker or a contractor, hard work and long hours are part and parcel of the job. On some farms you may be lucky enough to have a quiet season, but anyone who works on a big mixed enterprise will tell you that the hard work simply never stops.

The sheer relentlessness of farm tasks can be tough for some people. Yet there are others who don’t just put up with the procession of tasks, they positively relish them.

Dominic Hutter definitely falls in the latter category. Not only will he tackle pretty much all aspects of farmwork, whether milking or machinery maintenance, but he loves all of them.

This is a good thing, since Dominic’s workplace is an exceptionally busy one. Park Farm may nestle in the attractive countryside at Curry Mallet near Taunton, Somerset, but there’s not much time to enjoy the view.

Dominic and his two colleagues have a busy workload, but he’s fine about that. “I’m not deterred by hard work,” he says. “I’m not really happy unless I’m working – I’m not that comfortable with leisure.”

Boss James Down says he never ceases to be amazed at Dominic’s appetite for hard work. “If there’s a blocked drain, he’s the first one to roll his sleeves up. “

What are his main tasks on the farm? Where do you start? On the livestock side, he shares milking duties with the other staff, which involves a 4.30am start, and does the day-to-day feeding and preparation of TMR for the dairy and beef cattle.

“Dominic highlights the enthusiasm, hard work and tremendous work ethic of farmworkers in the UK. It was an honour to be judging these high-calibre candidates who give such a lot of support to the farm business.”
Meurig Raymond
Deputy president, NFU

Then there’s rotating the breeding stock bulls, selecting cows for AI and the purchase and administering of vaccines and other medicines. He helps out with moving the beef cattle from one site to another as well.

Arable and grassland duties include mowing and buckraking, combine driving, grain storage tasks, ploughing and hedge trimming. Dominic does all the machinery servicing in-house and his characteristic thoroughness means chains are always oiled, bearings run true and belts (and tempers) are never frayed. He’s a good welder by all accounts, too.

What most makes him such a valuable asset to the farm, though, is his unflappable can-do attitude. Most of us get a little nervous if we stray into areas where we don’t know what we’re doing – whether it’s a sick cow or poorly tractor. But Dominic positively relishes the opportunity to take on the tasks others have given up on. “If there’s a complex job to be done, I’m there.”

The days are frequently long – sometimes he can start on the feeding at 7am and not be finished until 9pm. But cooked meals in the farmhouse provided by James’s mother Sally help fuel the hard-working staff.

This is a dynamo of a farmworker with a terrifically positive attitude and a love of hard work and challenges who any farmer would be delighted to employ.

“Isuzu UK understands that British farmers need a tough, versatile workhorse that can take on any job  and do it superbly well. That’s not  too different from the abilities of the  three candidates in this category, who brought skill and staying power to  all the tasks they tackled.”