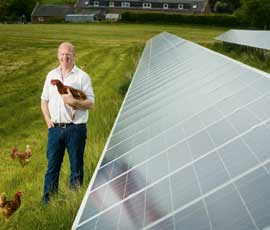 It’s not just his passion, enthusiasm and determination to make family farms more resilient through the use of renewables technology that made John Seed win this award.

The judges were wowed by his original approach to energy use and ability to turn an expensive, energy-consuming process on his 204ha arable farm into an innovative, money-saving solution, already being replicated by other farmers across the country.

He is certainly on track to meet his goal of making his Scottish Borders farming enterprise a “prime example of an energy-efficient farm”.

After years working away from agriculture in the biomass industry, John returned to his family farm in 2008, and has since turned a business that was previously “haemorrhaging cash” into a profitable enterprise. Turnover for the 2012-13 financial year was about £200,000, with £40,000 profit.

“Renewables has changed the nature of my farming business,” says John, who runs the farm in partnership with his wife Louise and son Donald. “If we had carried on the way we were, we were just going to be going hand to mouth.”

Putting his knowledge of the biomass industry to good use, John saw an opportunity to reduce the farm’s heating bill when the continuous-flow grain dryer needed to be replaced. Heating the farmhouse, cottages and grain dryer was costing about £38,500 a year for heating oil, while electricity use ran to about £8,000 a year.

He initially installed a 450kW straw-fuelled batch boiler, but has since designed and installed Europe’s largest batch straw biomass boiler – 950kW in size – to complement a new grain dryer.

The boiler replaced the 450kW model and is used to heat the grain dryer, farmhouse, cottages and a new free-range 16,000-hen RSPCA Freedom Foods-certified egg unit via a small district heating system.

It’s fuelled using between 200-300t of rape straw every year – about one-third of the straw produced annually on the farm. The boiler also provides ash for use as a soil conditioner, reducing the farm’s fertiliser bill.

To make full use of the boiler’s potential, John dries woodchip and has adapted the grain dryer to kiln-dry logs. He also plans, through his role as director of the Borders Machinery Ring, to set up a wood production group for other farmers in the area.

Despite leaving the biomass industry – he remains a chairman of renewable energy company Helius Energy – John set up a biomass boiler business called Topling. He plans to use his farm as a demonstration site and the boilers are already in use on neighbouring farms.

The farm also has a 50kW ground-mounted solar array, sited beside the free-range egg unit and during the judging visit in May, the Seeds were finalising plans to install a refurbished second-hand 75kW wind turbine.

A keen advocate for on-farm renewables, John recently welcomed secretary of state for business, innovation and skills Vince Cable to the farm to discuss the importance of banks lending to farms for renewables projects.

“Marks&Spencer has been impressed with the quality and quantity of entries. All three finalists show how renewable energy and food production go hand in hand to create a sustainable future for UK agriculture.”

Save money on your energy bills with our new Farmers Weekly Energy Switch service.
See how much you can save
See more
Share this