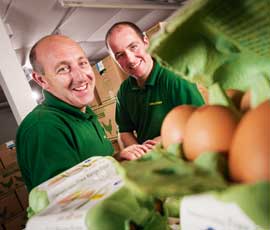 Grabbing every opportunity to develop their business while spreading risk and nurturing a brand are just some of the attributes that set egg producers Stephen and Richard Tulip apart from the crowd.

“If it makes sense, go for it” is typical of their approach – an ethos that has held sway for three generations, since their grandfather started out on a tiny plot outside Newcastle upon Tyne in 1951.

But things really took off when Stephen and Richard came on board, embarking on a 10-year expansion plan in the early 2000s.

Lintz Hall Farm diversified into free range and became Lion code and Freedom Food accredited. “We could see free range was where the supermarkets were going and we needed to go there too,” says younger brother Richard, who gave up a fledgling career as a DJ to take on the sales and marketing role for Lintz Hall. “But more than 50% of sales were still in cage eggs, so we also decided to invest in colony.”

Richard says the family philosophy has always been to do the whole job from start to finish and work closely with everyone involved. In total, Lintz Hall has invested £7m since the first free-range flock went down in 2004, culminating in the completion of a new 132,000-bird colony unit and packing station in 2011.

As well as diversified production, the Tulips ensure they have a varied customer base, supplying a range of independents, wholesale and food service outlets. They are also sole suppliers of locally produced free-range eggs to Asda and Tesco in the North East, with their Derwent Valley brand. This followed direct approaches by the brothers to the supermarkets to get shelf space for their product.

Production at Lintz Hall is overseen by older brother Stephen. “Continued monitoring is key,” he says. “Everything we do is tailored for the stock, not for ease of management. We blood test at the end of each flock to monitor what the birds have encountered. This allows us to adjust our vaccination programme before the next flock arrives.”

“A business that has successfully adapted to the changing requirements of legislation and consumers through investment and by actively seeking and winning new customers.”
Jason Giittens
ADAS

All sheds have load cells to monitor daily feed consumption, and diets are tailored for each stage of the bird’s life. “We look for an average egg size of 65g. There is no need for the egg to be any bigger as there is no price premium and you are sacrificing shell quality.”

Stephen has also developed an automatic water flushing system that runs at night to ensure there is fresh water for the birds first thing in the morning.

Emphasis is also put on staff training to ensure they adhere to strict biosecurity protocols and spot any performance changes.

The brothers are aware of their social responsibilities, hosting a number of farm visits, sponsoring the local rugby club and supporting Hen Power, a charity giving birds and pens to a housing scheme in Gateshead.

“The poultry sector is full of talented individuals who combine production excellence and business acumen to keep the nation’s shelves stacked with quality eggs and poultrymeat.”