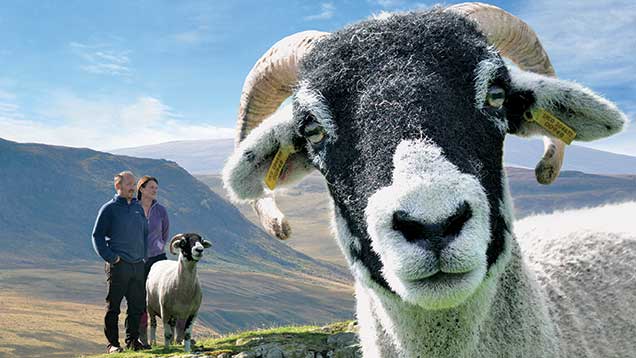 A farming couple and a filmmaker have created a unique film that is changing the general public’s perception of agriculture.

Addicted to Sheep is an 85-minute documentary that charts the lives of Tom and Kay Hutchinson, tenants on a small hill farm.

Launched in August, it is the brainchild of filmmaker Magali Pettier, who teamed up with the County Durham couple to depict life on the 40ha Bail Hill beef and sheep farm on the Raby Estate.

It involved 45 days of filming spanning 18 months, with the result portraying farming families and communities in an honest, positive way and debunking many of the myths about agriculture.

See all the winners and pictures from the night on our Farmers Weekly Awards page.

Set to be seen by urban cinema-goers across the nation, it has been described as “a rare treat” by Mark Kermode in the Observer, while the Daily Mail called it “delightful”.

“We hope it will make the public realise the effort and passion that goes into farming, so when they go into a supermarket they will actually stop and look for a British product,” says Tom.

He and Kay were drawn to the project by the chance to raise the profile of tenants and to highlight their “special and amazingly close” community.

They immediately loved Magali’s approach. There was no big film crew. It was just her and the camera. “If something happens in the film, then that’s how it happened in real life,” says Kay. “Nothing was staged or planned.”

For Magali, the indie debut has been a “labour of love”, having taken more than five years. “The public don’t realise there is very little money in farming,” she says. “We want them to start appreciating where their food comes from. Hopefully people will finish watching it with more respect for farmers.”

A farmer’s daughter who grew up in France, she realised as soon as she met the Hutchinsons and their children, Jack, Esme and Hetty, that they would be perfect.

Tom and Kay Hutchinson with children Jack, Esme and Hetty.

“I wanted a couple with young kids, as they are not at all self-conscious, and Tom and Kay have a great sense of humour, so I knew they would come across well. They both have a very serious as well as lighthearted approach to life.”

Magali was also drawn to their positive, can-do attitude and the story of how they had worked so hard to get to where they are now.

The couple met at Askham Bryan College. Tom was then employed full-time as a farmworker, while Kay ran her own gardening business. They took a tenancy on a smallholding in Northumberland, before securing the tenancy of Bail Hill, near Barnard Castle, in 2005. They now run the Kingshaugh herd of Limousin and Hereford cattle and flock of Swaledale sheep. Tom has carried on contract clipping and working on a self-employed basis dressing stock for shows and sales.

NFU president Meurig Raymond said: “We are delighted that this year’s Farming Champion is not just one worthy winner, but three. They have helped to make what some may feel is the very ordinary story of sheep farming in the north of England into something extraordinary.

“In making Addicted to Sheep, farming has been brought to the big screen and to a whole new important audience. Magali worked with the Hutchinsons to make this film after she moved to the North East and saw the dedication and passion of the family in caring for their flock.

“What makes this all the more incredible is that Magali spent more than five years shooting the content with no budget or income,” adds Meurig.

“British food and farming relies on the support of shoppers and the more we can do to help tell our story and create understanding of all the hard work, dedication and care that goes into producing  food, the better.”

Farmers Weekly editor Karl Schneider says: “The reality of running a small farm is that it is incredibly hard work and can pay very little, but farmers across the nation do it because they are committed to putting food on the nation’s plates and looking after our beautiful countryside.

“Whether it is their passion for improving their stock, or their commitment to the local community, the Hutchinsons embody so many of the positive traits farmers display – and Magali has captured these brilliantly in this moving film.”

For Tom and Kay, it has been the chance to focus attention on the practical realities of life as small, tenant hill farmers, where diversification simply isn’t an option.

“We didn’t even contemplate our next-door neighbours watching it, let alone someone in London!” says Kay.

“We’re just normal people. It has not changed us. Mainly, it has just reminded us how lucky we are to live and work in this beautiful landscape.”