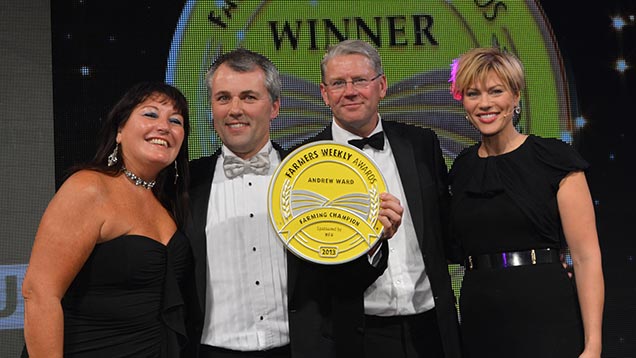 Farmers are a modest bunch on the whole, right?

They are sometimes reluctant to talk about their achievements. This can be an admirable trait, but it’s also a shame because sometimes we all deserve a bit of recognition and a “thank you” from our peers.

So we are hoping that friends and family will nominate worthy contenders for the Farming Champion category of this year’s 2015 Farmers Weekly Awards.

The award will go to someone who has gone over and above the call of duty to support and serve other farmers.

Someone who does their day job, but then goes the extra mile to back British farming or food.

Someone who’s looked beyond their own business self-interests to promote the wider goals or interests of our industry, in any of its many guises.

Do you know someone like that? Your husband or wife? Your son or daughter? A grandparent? A neighbour? An old college contact? A colleague?

It might even be someone you have never met, but just admire.

Anybody of any age or background could be a contender, if they have promoted or defended agriculture, or helped other farmers or their families.

We don’t need reams of information, just a line or two about why you think they should be the 2015 Farmers Weekly/NFU Farming Champion of the Year.

How to nominate a champion

It’s simple – just email tim.relf@rbi.co.uk with the name of the person you would like to put forward, and a few words about why you think they should win.

Lincolnshire grower Andrew was recognised for launching a campaign, later to become known as Forage Aid, to get free forage to farmers who were affected by snowstorms that decimated their feed supplies.

Farmworker James was involved in a devastating and life-threatening farm accident in 2005.

He used his experience to prevent others suffering and so went on to spread the safety message to audiences at shows, events, on radio and television, encouraging others to take more care.

Hertfordshire farmer Ian founded Open Farm Sunday, an event that sees hundreds of farmers open their gates to the public each year, to spread the word about British food and farming.