Skilled business management and technical excellence have won a Sussex grower the title Farmer of the Year in the 2016 Farmers Weekly Awards.

Nathan Dellicott was handed the award by Defra secretary Andrea Leadsom at the annual event held at the Grosvenor Hotel in London on Thursday night (6 October). 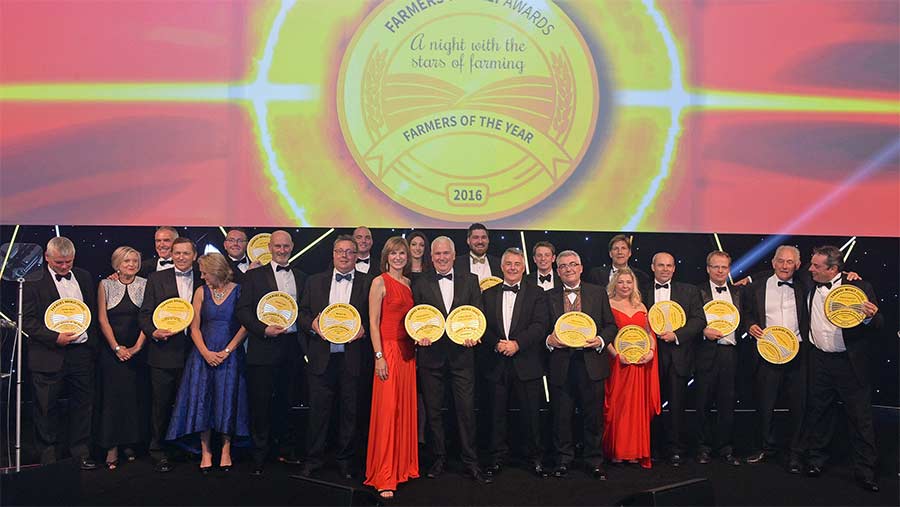 More than 1,200 people packed into the Grosvenor’s Great Room for the ceremony, hosted by the BBC’s Fiona Bruce.

See also: Read all of the winners’ stories

FW editor Karl Schneider said it was a difficult task choosing an overall winner this year. The Richards Family, from the Green Waste Company, and Robert Caldecott, from Caldecott Turkey Farms, were both highly commended.

But the 2016 Farmer of the Year award was handed to Sussex specialist crop producer Mr Dellicott, who was recognised for more than three decades of work at Barfoot Farms, a 2,430ha sustainable vegetable crop production business. 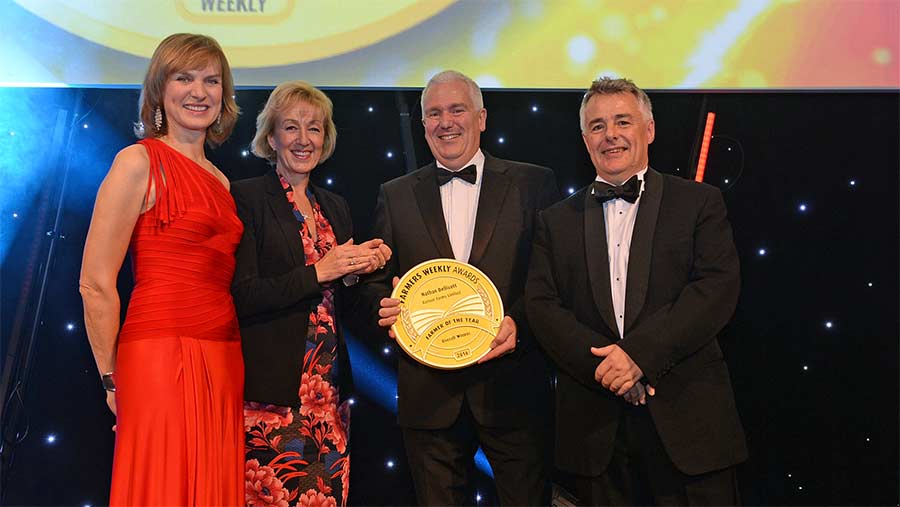 The farm produces predominantly sweetcorn, brassica, legume and cucurbit crops across five farms from Bognor Regis in West Sussex to the north-west edge of Southampton in Hampshire.

It supplies semi-exotic vegetables to a number of major supermarkets and restaurant chains. All produce is grown, processed and packed by the 28-strong production team.

The evening will go down as one of the most memorable FW Awards events of recent years, helped by an appealingly eclectic soundtrack, featuring rock, 1980’s pop and contemporary beats, such as Sigma’s Higher and Justin Timberlake’s Can’t Stop the Feeling.

The night started with a spellbinding performance from dance cabaret ensemble West End Cabaret, who belted out hits including All That Jazz from the Chicago musical and Popular from the Broadway musical Wicked, to the delight of the audience.

However, the pick of the bunch was the group’s barnstorming rendition of Mama Mia! which set the scene perfectly for the awards presentation to begin in earnest.

Opening the awards, Mr Schneider said: “These are challenging and uncertain times for our industry.

“The decision to leave the European Union has thrown into question much that we have previously taken for granted.

“The need for more young people to come into the industry has never been more important. At Farmers Weekly, we recognise we have a part to play here.

“Hopefully, many of you will have watched the first episode of Farmers Apprentice last week. It’s a wonderful showcase for the high-tech, rewarding career that is 21st-century farming.

“We are also running our hugely popular Fertile Minds event this year, involving more than 120 of the most dynamic young people in agriculture.

“And next month sees the launch of our first agri-careers live event, helping more than 1,000 young people explore career opportunities in agriculture.”

Mr Schneider said none of these events would be possible without the help of sponsors. He also paid tribute to the judges who had travelled some 10,000 miles between them to the farms of the 45 finalists.

Fiona Bruce, who was asked to present the awards for a second time, having last presented the awards in 2006, dazzled the crowd in a floor-length red dress.

She enthused: “When I get up in my house in Oxfordshire, we have the sounds of the cattle on the way to milking and sheep in the other field bleating away. I have chickens to my right. And I have to say, I love that. I love the sounds and the smells – being in touch with nature, the seasons.

“I watch the weather forecast like a hawk. I get so much from that and the contrast with the newsroom, which is intensely urban.”

The winners of fifteen awards categories included a lifetime achievement award for John Alliston, emeritus professor in agriculture at the Royal Agricultural University. 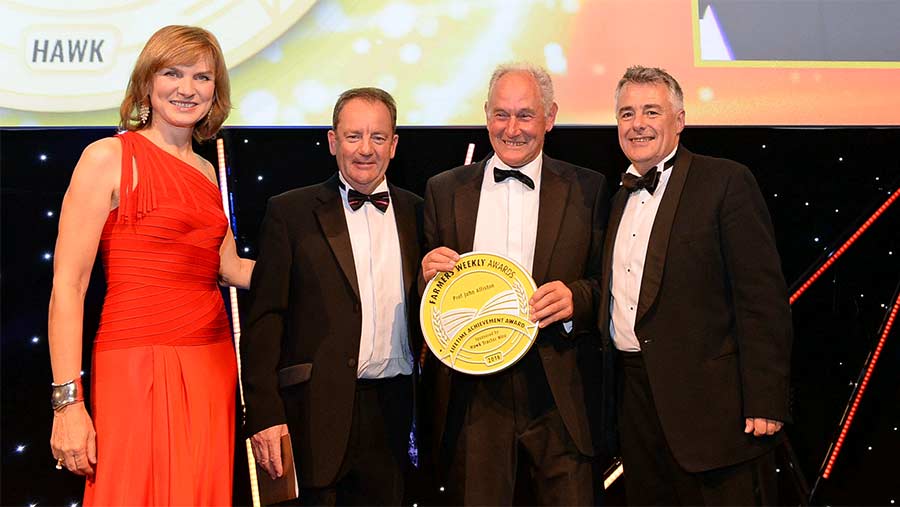 Accepting his award, Prof Alliston said: “I work with some brilliant young people. As I am very old, everybody I work with is young. I really thank you very much indeed for this. It means a great deal to me.”

Cambridgeshire farmer Michael Sly was handed the 2016 Farming Champion of the Year award for educating the public, especially young people, about agriculture.

His team at Farm Park, Thorney, welcomed more than 8,500 visitors during its Open Farm Sunday weekend this year. 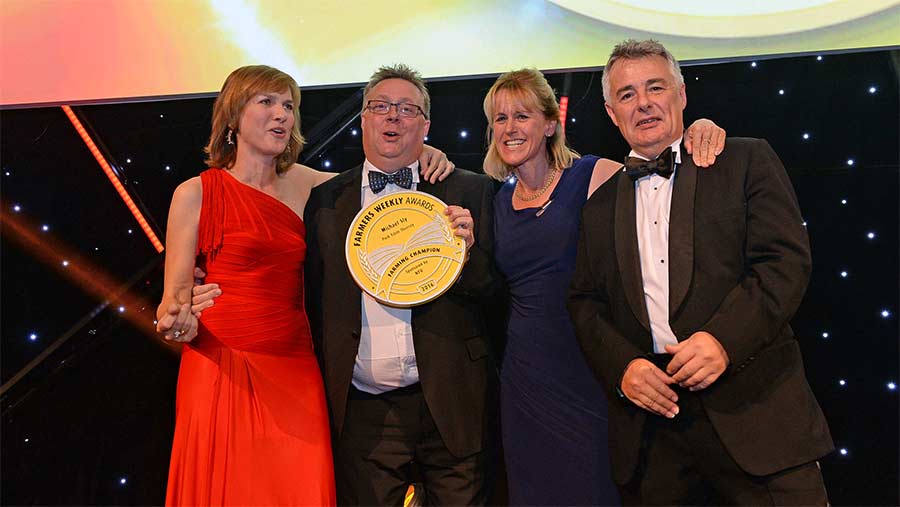 The award was sponsored by the NFU. Presenting the award to Mr Sly, the union’s deputy president Minette Batters said: “His Open Farm Sunday event has become quite legendary. It has evolved into a whole-week initiative, involving local farmers and busineses.

“When it comes to bridging the town and country gap and banging the drum for farming, no one has done more in the past year. He is a truly fantastic ambassador for agriculture.”

Defra secretary Andrea Leadsom told the audience: “I have a real heart for the industry and the work that you do and you really deserve this awards ceremony. You really are the unsung heroes of our country. You feed us, you look after our environment.

“The environment would be nothing without you, so thank you so much.”

Read all of the winners’ stories