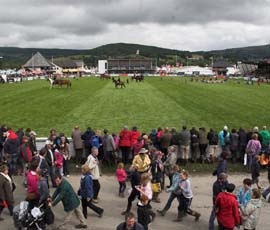 Welsh farmers will learn how much they stand to gain from Wales’ share of CAP subsidies at this month’s Royal Welsh Show.

Wales’ farming minister, Alun Davies, will use the country’s biggest annual gathering of farmers to set out his detailed plans for distributing CAP payments.

But farmers could be disappointed because the €55 billion reduction in the overall CAP budget will hit Wales and its rural communities, warned the minister.

Speaking at the National Assembly on Tuesday (9 July), the minister said he was “deeply unhappy” that the budget had been cut and that the overall CAP budget would continue to be eroded in the future.

“It is therefore essential that we work with farming businesses to help put them on the best possible public footing for times when public funding is likely to be even lower,’’ he said.

Mr Davies will consult on a timescale for introducing area-based payments to supersede the historical model currently in place in Wales.

He will also outline preferred options for a payment system, payment capping and greening.

The minister believed the Welsh Government would be in a “strong position” to implement the new direct payments system from 2015.

The consultation will look at the timescale and rate for a move to completely area based payments, greening proposals and the transfer of budgets between Pillar 1 and Pillar 2.

Despite his concerns about the budget cut, Mr Davies said he believed Welsh agriculture would enjoy a “great future’’. But for success to be achieved, structures needed to be put in place first, he said.

“I believe that Welsh agriculture will relish and rise to the challenge and I look forward to working with our farmers and the wider rural community to help them do so,’’ he said.