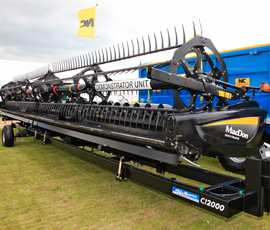 Shelbourne Reynolds has upgraded its range of McDon draper headers for the 2013 harvest.

It started bringing in the Canadian-made units last year and now has some six machines at work in the UK.

The main advantage of a draper header over a conventional combine header is the speed with which the crop can be got to the feeder housing.

Instead of using a steel auger to shift the crop to the centre, the McDon has a pair of fast-moving rubber-and-steel belts that quickly move material to the centre of the header.

In wheat, the improvement in crop flow means the combine can go 20% faster, says Shelbourne’s Neil Smith. Rape throughput is similar to a conventional header, but Mr Smith reckons that in more specialised crops like peas the improvement in speed can be up to 200%.

The cost of a 40ft draper header is £70,000, about twice that of a conventional header. However for  farmers who want to maximise their throughput, that cost will be more than cancelled out by getting crops in faster before the weather turns.

The other advantage of the McDon header is that the whole unit can be tilted up and down to make it easier to pick up the crop. Headers with 30ft, 35ft and 40ft are currently available.

What about longevity of the belt? Mr Smith says that 10 years should be typical, though anyone running the header close to the ground in stony conditions a lot of the time would probably see a slightly shorter belt life.

However the belts are said to be easy to splice to allow a DIY join to be made. They are also reversible.