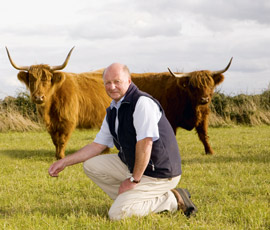 Britain’s farmers are being sold short by a Treasury that fails to understand agriculture, former farm minister Jim Paice has warned.

Speaking to Farmers Weekly, Mr Paice said the Treasury had a perverse attitude to farming that was hampering attempts to get the best deal from CAP reform. As a result, farmers and the country at large were losing out.

The Treasury had too much influence on DEFRA’s stance towards CAP reform, said Mr Paice.

“We have the fundamental problem that as far as agriculture is concerned, the whole discussions are bedevilled by the UK rebate – which was a tremendous achievement by Margaret Thatcher and the country has gained a great deal out of it,” he said.

Mr Paice added: “We should be claiming whatever we can out of the CAP rather than holding it back to maximise the rebate. So I think there is a fundamental problem there but ministers of all departments have to live with the Treasury looking over their shoulder.”

It is not the first time Mr Paice has criticsed the government’s stance towards CAP reform since losing his job in a ministerial reshuffle last autumn. Earlier this year, he criticised the government for wanting to phase out farm subsidies too quickly, giving farmers little time to adapt.

The issue is likely to raise its head again at this week’s Cereals event in Lincolnshire. With farmers facing a reduced harvest for the second consecutive year, the NFU believes a fair deal on CAP reform is vital to help offset the impact of extreme weather on agriculture.

An NFU poll due to be unveiled at Cereals is likely to confirm expectations of a much reduced harvest. Farm consultants Brown & Co have also warned that the cashflow implications of another poor year will likely be felt for some time to come.

Updating farm cash flow forecasts over the next few months due to reduced cereal yields would be vital to identify potential shortfalls and revise borrowing requirements, said Paul White, a partner at Brown & Co’s Spalding office.

After one of the worst harvests for years and the wettest autumns ever, most arable businesses would face ongoing sizeable cash deficits into the current 2013-14 year and beyond, said Mr White. Wheat yields for harvest 2013 were likely to be 15-20%, he said.