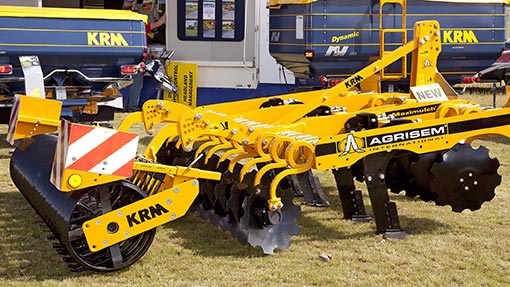 North Yorks firm KRM announced that it had added French-made Agrisem Disc-O-Mulch cultivators to its portfolio at Cereals 2014.

These tough-looking units have been brought into the UK in the past, but KRM boss Keith Rennie reckons the are now right for the UK.

They have some interesting features. One is that the cutaway discs are mounted on patented pigtail-type tines. This is said to give a percussion effect on the soil rather than the cushioning of normal rubber-mounted discs.

Also, the front discs (610mm) are a bit bigger than the rear ones (560mm). Since wear is always greater on the front discs, it means that the discs will wear out at more or less the same time.

Sealed hubs are fitted and the V-shaped roller deliberately fills with mud to reduce wear.

There are models from 3-12m and there’s also a MaxiMulch variant that also has a row of deep loosening legs.