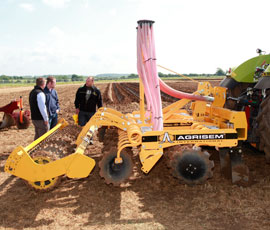 French firm Agrisem had somewhat disappeared off the radar of most UK farmers since Cambridgeshire importer Reco opted to switch to Sulky machinery in 2006. But it’s now back and is being distributed by precision farming specialist Manterra. Having remained popular on the other side of the Channel, Manterra hopes the machinery will prove a popular partner to its SBG autosteer system for accurate wide-row rape drilling, band spraying and inter-row weed control. Attracting interest on the stand was the Combiplow – a 2.5-6m subsoiler with a rear three-point linkage rated to 3t. It means there’s the option of attaching other cultivation kit on the back to reduce the number of passes and make things more flexible, says Manterra’s Andrew Manfield. A 3m Combiplow 36 costs £7,500. 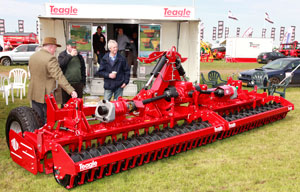 Although Teagle has been selling Tulip machines for close to two years, what caught the eye at Cereals was its range-topping 6m Tulip Roterra power harrow. Previously sold by Lely, the Dutch-built Tulip 600 has a parallel linkage system that allows it to follow ground contours. Rotors are spaced at 25cm intervals and machines come with club tines as standard, which the company says produce a better tilth and offer fuel-saving opportunities. A sprung levelling board makes sure clods aren’t buried. The Roterra will need 275hp on the front and can be on-farm for about £23,500.