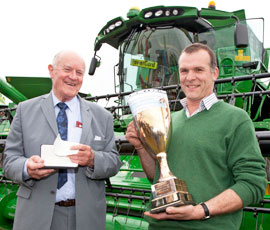 Hugh Sapsed, who drives the combine at John Sheard Farms at Pertenhall in Bedfordshire, is this year’s Combine Driver of the Year.

The farm has 800ha (2,000 acres) of combinable crops and Mr Sapsed has been driving the farm’s Deere twin-rotor CTS combine for nine years. Interestingly, this is the second time that particular model of combine has won the competition. Despite working in a less-than-ideal field, he managed to combine a brisk forward speed with low losses.

Pre-season training takes place in spring and early summer, Mr Gardiner then visits each driver during harvest and does a two-hour assessment of their technique and machine settings, including how much grain is lost and whether they’re driving at the right speed.

Even though modern combines are highly sophisticated, keeping an eye on losses is still as important as it ever was, say Mr Gardiner. Average losses at the header and over the back often add up to 250kg/ha, he points out. On a 1,000ha farm that amounts to 250t/year, which at £150/t would mean the farm was wasting nearly £44,000 a year.

After training, he adds, the losses are usually in the order of 50kg/ha, which makes for a much more reasonable-looking loss level of 50t/year, wasting just £7,500.

Average speeds are also typically pushed up 30% from an average of about 4kph before training to about 6kph after combining – a dramatic rise in workrate.