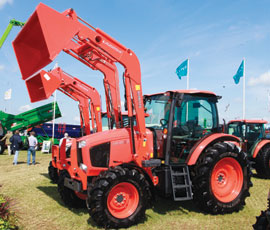 Though its M135GX tractor was seen earlier in the year at the LAMMA show, Kubota used the Cereals event for the UK launch of four new tractors in the range.

The 135hp M135GX replaces the M130. This is the first Kubota to have a front suspension and it’s a unit that has three softness settings as well as an auto option for use with mounted equipment.

The engine is a new Stage 3B-compliant unit that uses exhaust gas recirculation (EGR) and a diesel particulate filter (DPF). The Intellishift transmission is a new three-range, 8-powershift unit with a push-button system that means there’s no need to use the clutch at all. There is also an ecodrive setting that drops revs from 2600rpm to 2100rpm at 40kph to save fuel.

Road and field auto modes allow the transmission to move up or down by four powershift steps and there are two rpm presets for fieldwork. There’s also a smaller model called the M110GX.

Kubota’s smaller M-series machines gain a couple of new models, too, with the 85hp M8560 and 100hp M9960 replacing the existing M8540 and M9540 models. The main changes are the move to Stage 3B commonrail engines with EGR and DPF, two rpm presets plus an eco 40kph to save fuel on the road.

Given that the average hp of new tractors bought in the UK is edging towards 150hp, Kubota is all too aware that it needs to offer more powerful models if it is to be a truly mainstream maker. But UK manager Dave Roberts says the plan is to have a 170hp model by 2015/2016.