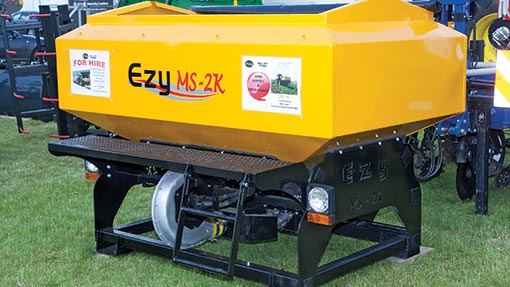 Another Irish company that has a recent history building fertiliser spreader bogies it Ezy Technology, but it was an implement for the front of the tractor that caught the eye.

The MS2K is designed for precision fertiliser application, using a 2,700-litre front hopper and carrying up to 12 distribution outlets. Control is done via a RDS-built box with GPS radar, and the asking price is £18,000.

The company has also revealed it has an agreement to take over the importing of Nebraska-made Blu-Jet machinery. South-west company AMIA initially brought the range of min-till kit and inter-row fertiliser systems to the UK, but Ezy has since taken on the distribution.

On the stand was Blu-Jet’s answer to strip-tillage, which Ezy plans to demo this year. An eight-row machine, which is likely to be the most popular for UK maize growers, costs £34,600 and will be available in combination with Ezy’s new fertiliser applicator.