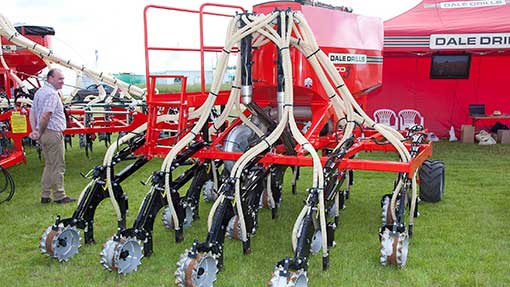 Direct drills used to be scarily expensive bits of kit, but now manufacturers are starting to bring out lower-cost versions for farmers with shallower pockets.

The latest to scale down its offering is Lincolnshire firm Dale with a lower-cost 3m mounted version of its Eco-Drill seeder.

Called the Eco3, it uses the same tine-coutler assemblies as its bigger sibling. These can be adjusted to plant cereals from rows from 12.5-25cm and oilseed rape up to 50cm. Each coulter assembly has its own depth adjuster and lifts in and out of work independently to the drill frame.

The Eco3 is available as a seed only drill, but according to Dale a large proportion will be sold with split seed and fertiliser tanks. These can be either drill- or front mounted and both options come with Accord metering units controlled by RDS electronics.

Just 60hp is needed to pull the 3m drill through the ground, but the weight of the hopper means tractors with less than 150hp under the bonnet probably won’t have the muscles to lift it.