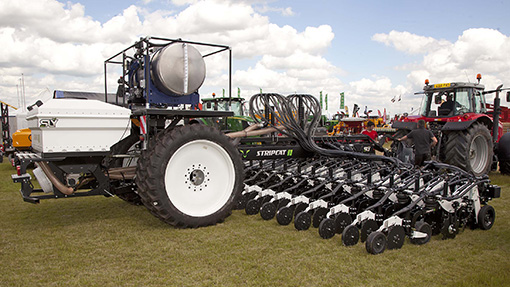 Previously the biggest machine in the UK was a 6m mounted machine, but demand for higher outputs prompted owner George Sly to build a bigger trailed version.

The resulting machine weighs a whopping 14t and has to have a two-stage hydraulic folding mechanism to tuck its limbs within the 3m transport limit.

It has also been adapted to do more than just cultivate. The machine on show at Cereals 2014 had been fitted with a split 2,200-litre seed and fert hopper for direct drilling oilseed rape. This hangs off the back of the chassis on a fixed three-point linkage and has separate RDS metering units for each product.

Seed and slug pellets are then blown along a set of seeder pipes to the rear discs. Seed is placed with a seeding boot mounted at the rear of the disc, while slug pellets are left to trickle out on the surface.

For those wanting to plant maize and sugar beet in one pass there is also the option of upgrading to a hydraulic three-point linkage that can hold an 18-row precision planter on the back.

The whole unit is carried on a set of large-diameter dual wheels. These keep rolling resistance low and are spaced so that they straddle the rows.

Minimum power needed to pull the rig on sandy ground is 360hp, but you’ll need at least 500hp to be man of it on the heavier stuff.

The price including oilseed rape seeding kit is about £100,000.