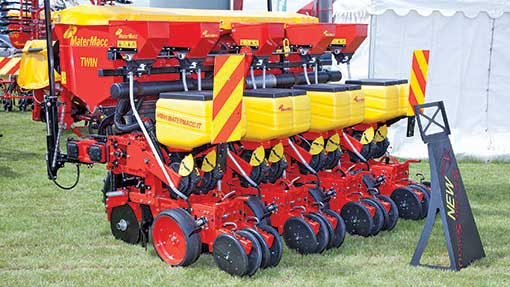 Italian maize drill maker Matermacc is a pretty new name in the UK.

It sold its first single-row machine here in 2010 and four years later there are 10 working on British farms.

Now it’s launching a twin-row precision planter called the MS Twin. Unlike some other planters of this type, the seeder units have been mounted inline rather than offset.

This keeps the machine shorter so that it’s easier for smaller tractors to pick up, says the firm’s Luca Vendrasco. This means farmers need no more than 90hp to handle an 8-row, 4m machine.

The idea of twin-row maize planting is to increase yield by upping planting density and yield. Seeds from each of the two units are staggered to create a zigzag seeding pattern.

Matermacc has one demonstrator MS Twin working in the UK, but has already tested the concept on 6,000ha in Italy. It’s also experimenting using the machine to establish oilseed rape.