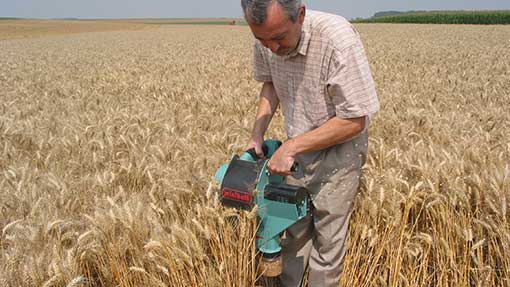 This pint-sized combine should take the tedium out of collecting grain samples for the moisture meter.

It’s called the Minibatt and has most of the bits and bobs you’d find in a full-size machine. These include a threshing drum and concave that can be changed according to the crop. There are three concaves in the kit – one for cereals, one for oilseed rape and one for peas and beans.

Fan speed is adjusted via a dial on the power drill-style trigger and air flow is controlled by opening and closing a vent on the side.

Importer Agricultural Supply Services says samples should be taken across the field in a “W” pattern and in five minutes it should have filled the 0.75-litre tank.

If the sample is dirty there’s also a hopper on the top for feeding it back through the threshing drum.