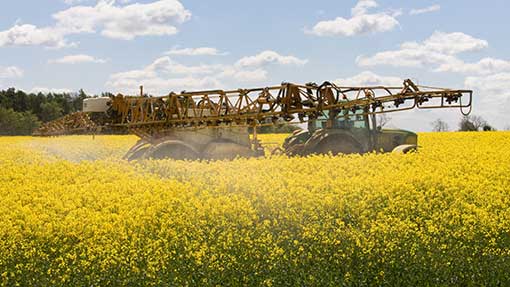 The crop protection toolbox is becoming worryingly depleted at a time when British farmers need to produce more crops, said the NFU.

Crop production – which is already flatlining – would be sent into decline if British farmers continued to lose access to key crop protection materials, it added.

Statistics show that half of pesticides have been lost since 2001, claimed the union.

Another half could be banned through what the NFU claims is overzealous regulation, not properly backed up with sound science, it said.

Backed by farm leaders, a Healthy Harvest campaign aims to safeguard the crop protection tools that are essential to sustaining current levels of agricultural productivity.

The campaign was launched by the NFU, Crop Protection Association and Agricultural Industries Confederation on opening day of the Cereals event on Wednesday (11 June).

NFU vice president Guy Smith said: “The UK is fast becoming an over-regulated environment for British farmers who are losing their home markets to foreign farmers who have better access to more effective means of crop production.

“At a time when leading scientists are warning that within a generation the world could be facing a ‘perfect storm’ of food shortages, this is not time to be taking away the tools our farmers need to produce disease free, high yielding crops.

British farmers needed to be able to use the same, safe technology as their competitors if agriculture was to have healthy harvests, said Mr Smith.

“The tools they need to protect yields and play their part in feeding a growing global population are being relentlessly taken away from them.

“It’s right that products such as pesticides are regulated to ensure they are safe for use, but we’re now subject to a system which is enormously over-precautionary, and which seems to be oblivious to the hugely important role crop protection products play in food production.”

“Agronomists are being increasingly challenged by their clients to improve farm output whilst protecting the environment.

A diminishing number of plant protection products to select from to control significant weeds, pests and diseases means increased pressure on remaining actives where chemical control measures are judged to be necessary.

“It would be a counterproductive situation where produce is being imported to the UK due simply to lack of an effective range of chemical control measures when we have skilled agronomists, farmers and the right climate to do this successfully for ourselves.”