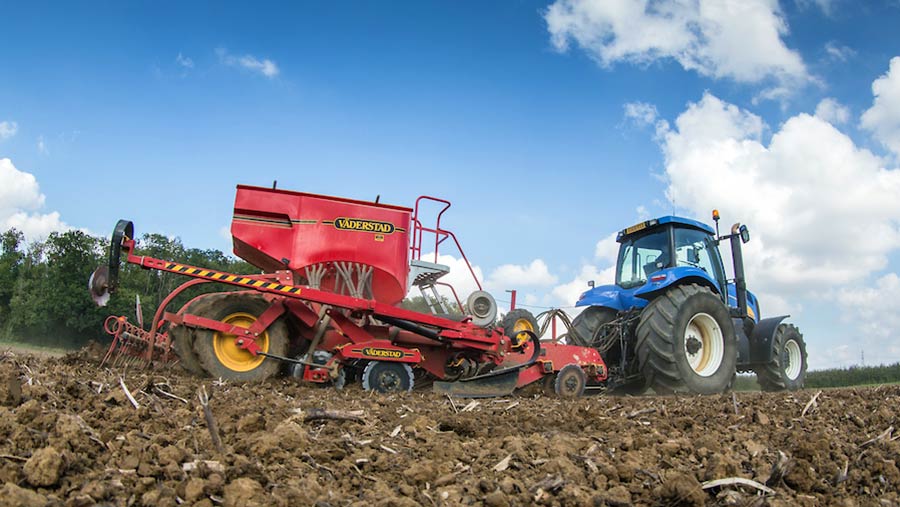 Winter wheat growers will have new biostimulant seed treatments available this autumn to help boost yields by 3%, as they improve nutrient and water uptake through better rooting.

Two biostimulants from agrochemical and seed giant Bayer will be launched for autumn drilling, with both of them included in a new product, along with an existing single-purpose dressing.

Claire Matthewman, the group’s campaign manager for seed treatments, sayid getting cereal crops off to the best possible start is the first step in setting the yield potential.

“These products can help cereal growers improve yields as they allow better nutrient and water uptake through better rooting,” she told Farmers Weekly at the Cereals 2019 event at Boothby Graffoe in Lincolnshire.

The seed treatments were being demonstrated at the group’s stand on the rain-soaked site a few miles south of Lincoln, where heavy rains had turned the light land into a sea of mud.

The first of the biostimulants, JumpStart WT, is a naturally occurring fungus that improves phosphate availability to wheat plants, as in some cases 90% of phosphate fertiliser can be locked up in the soil and so be unavailable to a crop.

The second, ProStablish WT, stimulates mycorrhizae fungi to germinate and colonise a plant’s roots, which helps the roots to transfer nutrients into the plants.

The two biostimulants will be available with a single-purpose dressing, such as Bayer’s Redigo Pro (prothioconazole + tebuconazole) for this autumn.

They will be available through agronomy and seed group Frontier and the cost will be a “small premium” over the cost of a single-purpose dressing. The group is launching the products this autumn in Britain, Germany and Ukraine.

The company adds that in 94 trials across Europe in 2017 and 2018, the combined seed treatment gave a 3% yield advantage over a single-purpose dressing.

Further down the product pipeline, Bayer hopes to launch a third-generation SDHI cereal fungicide with improved septoria and rust control in 2022, with an outside chance it might be available in 2021.

Will Charlton, the group’s cereal fungicide campaign manager, says the fungicide isoflucypram, which is also known under the chemical brand name Iblon, is chemically different to other SDHIs and show better efficacy, with a good level of persistence.

“The fungicide shows 10% better septoria control to all other second-generation SDHIs, and gives fantastic control of yellow and brown rust,” he says.

Second-generation SDHIs include bixafen (as in Aviator and Ascra), fluxapyroxad (as in Adexar and Librax) and benzovindiflupyr (as in Elatus Era), while boscalid (as in Tracker) is a first-generation SDHI.

The new fungicide is likely to be formulated with partner fungicide, such as in Bayer’s Aviator and Ascra, to prevent against the build-up of resistance to individual fungicides.