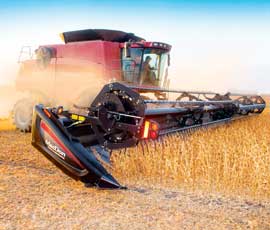 This year’s Cereals event may be six weeks away, but machinery manufacturers have already started unveiling the new equipment they will be selling this year onwards.

Shelbourne Reynolds says it will be showing upgrades to its range of MacDon combine draper headers, which are attracting growing interest in the light of last year’s damp cereal straw and laid crops.

Available in sizes from 6m-13.5m, the MacDon headers replace the traditional auger with two opposing lateral belts that draw the crop to the centre, where a short longitudinal belt conveys it to the elevator.

Only the reel and side-knife are powered directly by the combine, with the header’s shaft-powered, self-contained hydraulic system operating all other functions. The header is suspended independently of the combine, allowing it to float and even pivot the table to position the two split-drive knives as low as possible.

New D65 and FD75 models will be available for next season. Draper tension of the two main lateral units has been increased by 33% to improve belt drive when handling heavy of crop loads. Auto header height control and hydraulic header tilt are now standard on all D65 combine headers. 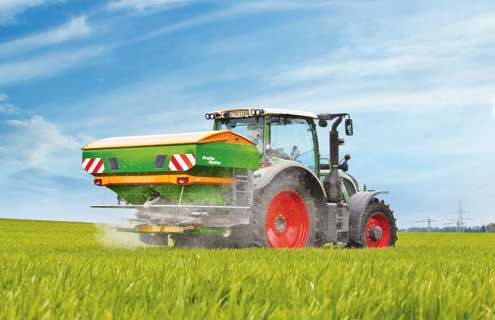 Amazone, meanwhile, says it will launch its new high-tech ZA-TS mounted fertiliser spreader at Cereals. Spreading width has been increased by approximately 20% and stable, triangular spread patterns can now be achieved at 36m spread width. At a working width of 36m, an application rate of 500kg/ha and a speed of 20kph, daily outputs of more than 600ha are possible, says the company.

At the same time, the on-board AutoTS high-tech boundary spreading system is said to give accurate border application. Working width on the ZA-TS is changed by electrically adjusting the delivery system, a task carried out remotely from the tractor seat. Spread widths on the left- and right-hand sides can be controlled individually.

The difficulties of controlling Backgrass are prompting new designs from manufacturers, too. A new 24m boom-mounted Avadex GR applicator from Techneat Engineering is designed to enable cereal growers to accurately spread granules across larger areas at the right time.

Designed to mount on a lightweight tractor or utility vehicle, it gives a fast way to cover the ground in virtually all conditions, says the company. Three hopper capacities are available: 200, 400 and 1,200 litre.

Case IH, meanwhile, has upgraded its combine cabs and added new unloading auger options. An 8.8m or 10.4m folding auger is now available to cope with unloading from the wide headers. A new pivoting spout option also allows the operator to adjust the grain stream in or out from the cab when unloading.

* The Cereals event takes place on 12 and 13 June at Boothby Graffoe, Lincolnshire LN5 0AS.