Crowds descended on Chrishall Grange, Cambridgeshire, for the annual Cereals event to see the latest in state-of-the-art farm kit on Wednesday and Thursday (15-16 June).

Farmers Weekly’s Machinery team has picked out six of the latest and greatest examples of innovative farm machinery exhibited at the two-day show. 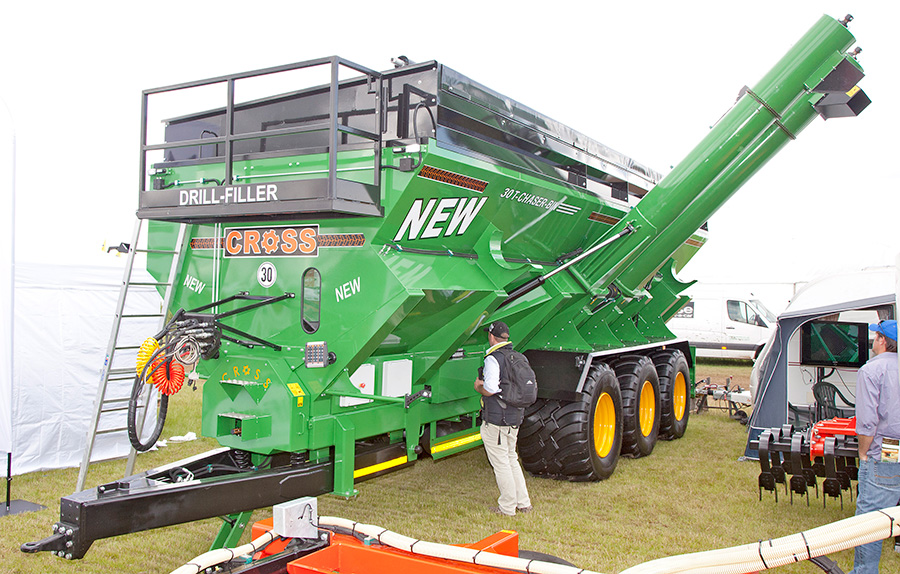 The heavy-duty chassis carries two 15t hoppers with separate 400mm augers that can be run individually or at the same time.

It means farmers can save a few quid by buying seed and fertiliser in bulk, rather than having to store everything in bags.

In chaser bin mode and with both pto-driven augers whizzing around, the whole load can be dumped into an artic trailer in less than three minutes.

All of the functions are electronically controlled from a box in the tractor cab, but the trailer also comes with a wireless remote to tweak flow rate and stop augers while standing on the drill. 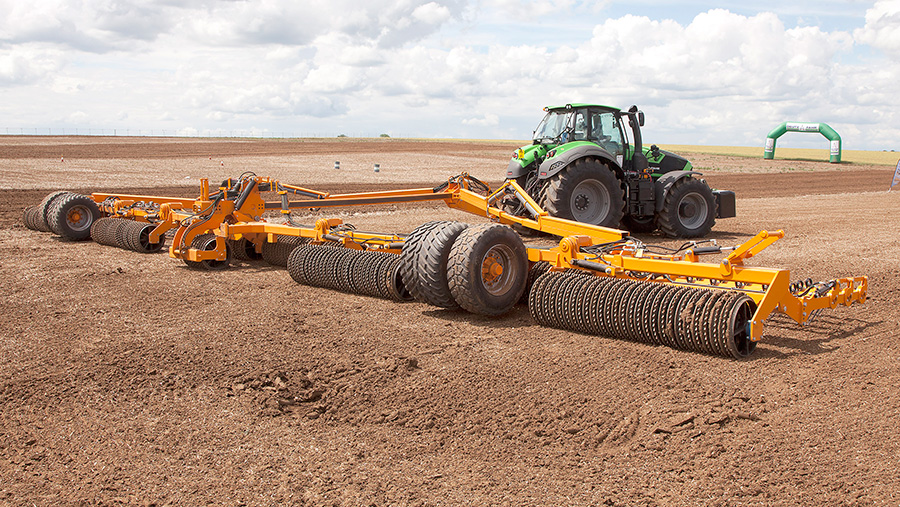 Essex-based dealer Brocks has continued its move into machinery manufacturing with the launch of a huge set of rolls.

Brocks’ design makes use of a lightweight drawbar and relies on natural weight distribution, with each gang pivoting at the joint between the roll sections.

The nine-gang set reaches to 20m and the 11-ganger sprawls to 24m, so Brocks recommends at least 300hp on the drawbar.

Operators will also need access to at least four rear spools to work all of the hydraulic rams.

Both versions are available with the choice of levelling tines or boards in front of the 24in rings, but the extra tools also bump up the horsepower requirement.

The company has found a way to folding the rig within 2.8m for transport, but total weight still hovers around 18t in basic form or 20t with the harrows attached. 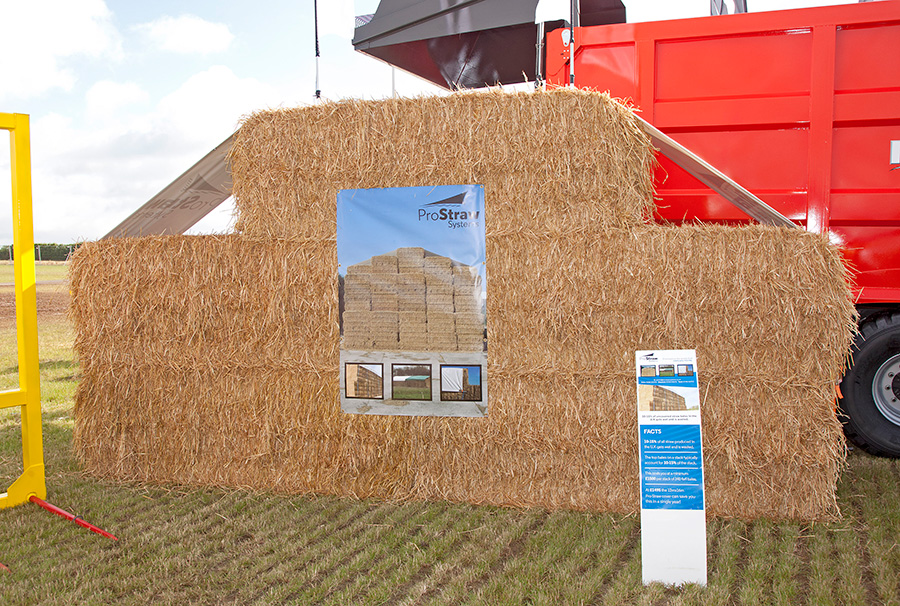 Farmers and contractors fed up with having to discard tonnes of water-damaged straw bales might be interested in a new heavy-duty mechanical sheeting system launched at this year’s Cereals.

The Pro Straw Systems kit was developed by Suffolk farmers Paddy and Will Reed and allows big-bale straw stacks to be sheeted safely from ground level.

Using a specially designed applicator, the leading edge of the 12mx16m sheet is lifted on to the top of the stack.

Once there, the applicator uses a pair of modified clay-pigeon traps to fire two webbing straps over the far side.

These are then attached to a second standard-sized telehandler, which drags the sheet over the other side.

Finally, steel anchors are used to secure the sheet in place.

Pro Straw Systems charges £1,500 for the heavy-duty sheet, which is made out of a similar PVC material to the one used on curtain-sided lorry trailers.

Custom-sized sheets can also be requested and larger operators will be able to purchase their own applicator. 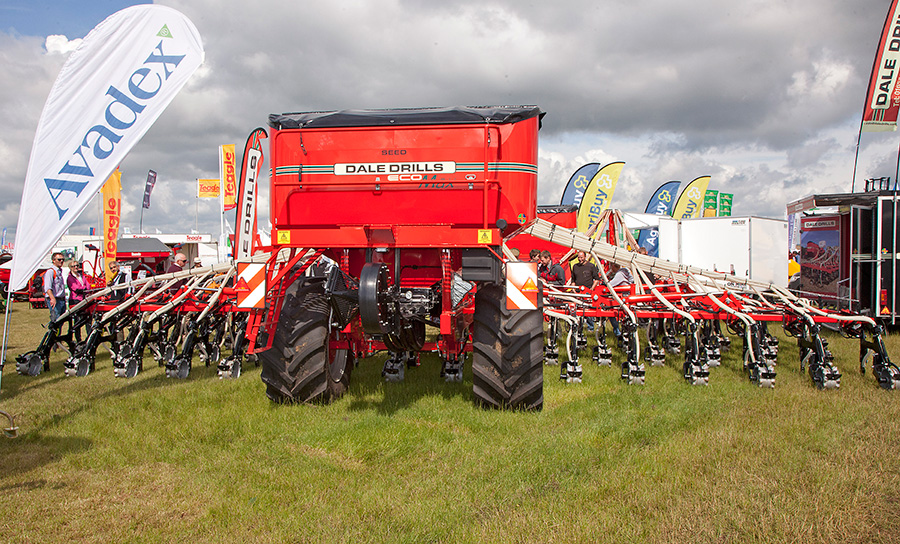 No-till specialist Dale Drills was showing off a colossal 12m version of its Eco Max seeder that uses a tine system to plant directly into stubbles or cover crops.

Until recently, the Eco Max was only available as a 9m or 10m machine.

But after a Cambridgeshire farmer successfully built his own 12m machine using a selection of bits from Dale parts store, it decided to put one together itself.

Like the original Eco Max machines, the 12m drill uses a beefy central chassis with a seed hopper mounted at the rear, directly over the wheels.

The folding wings holding the counters then hang off this central beam and there is an elevated frame to hold the four seed distribution heads.

These have to be mounted high to make sure there is enough fall to prevent blockages in the spaghetti-like tangle of seeder pipes.

Depending on conditions you will need to couple it to a tractor with 250hp to 350hp on tap. 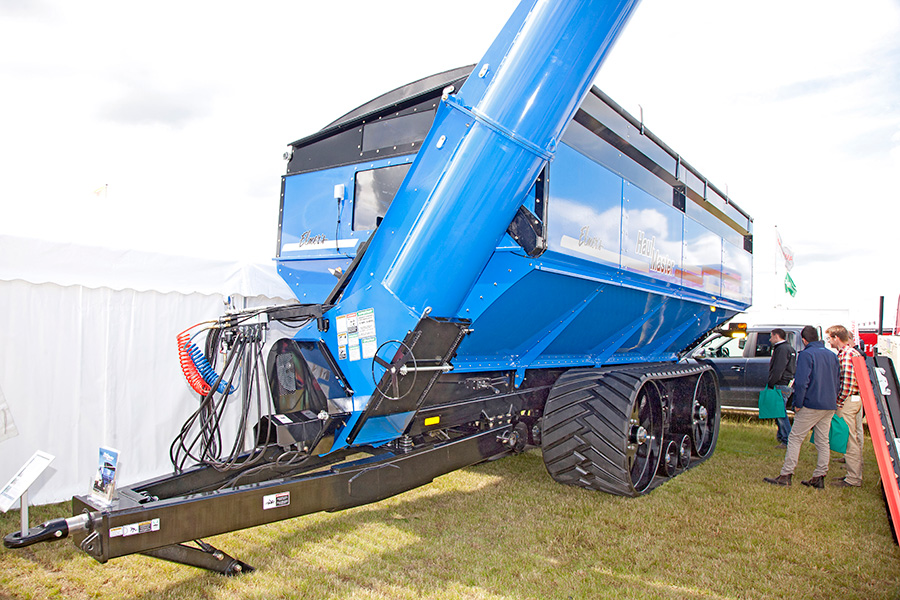 North-American chaser bins are usually far too bulky to cope with the UK’s narrow and winding road network.

This involved several modifications, including pinching in the 4m-wide main hopper to 42cu m and narrowing the track units to get it within the crucial 3m transport width.

It also has a straightforward pto-powered main auger and there is a belt drive off the main gearbox to power the large-diameter auger.

This is capable of winding out 30t of wheat in less than 2mins.

To help spread the considerable bulk, the unit runs on the maker’s own track units, which are wrapped in Camoplast rubber.

The 42cu m Haul Master is being sold by Master Farm Services and has a list price of £90,000, including roll-over sheet and Agrimatic’s weigh cell system. 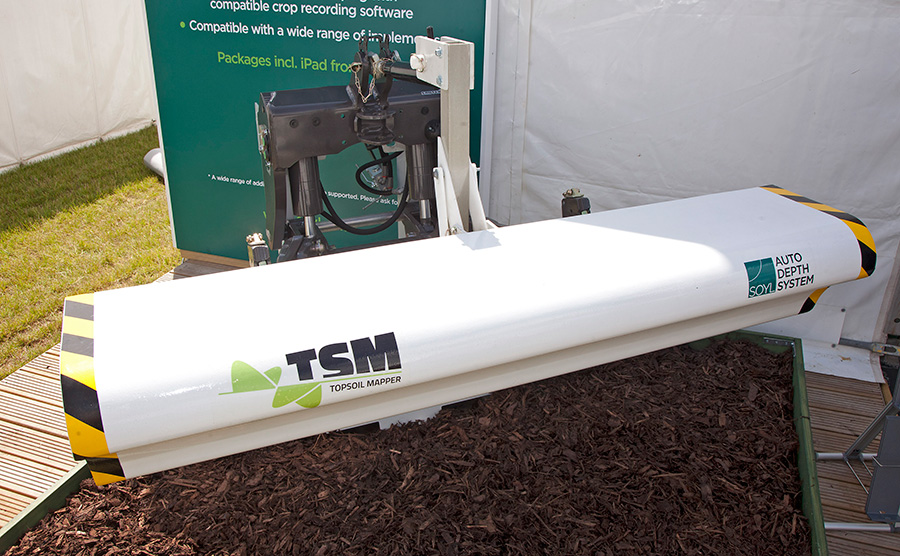 Boffins at Soyl have come up with a clever sensor that mounts off the tractor’s front linkage and tells the subsoiler on the back how deep it needs to work in order to hit compaction.

The Topsoil Mapper uses a series of electrical conductivity sensors that fire signals into the soil profile.

Depending on the type of signal that bounces back, the sensor’s brain can work out the exact depth of the compaction.

This information is then sent back to the firm’s existing variable-depth system that hydraulically adjusts subsoiler depth.

Adding the Topsoil Mapper to the existing system means you can carry out variable-depth subsoiling without having to do any prior soil zone mapping.

All this comes at a price, though.