For anyone who is thinking of replacing a drill, cultivator, rolls or a sprayer, the Cereals Event, held on 15 and 16 June at Chrisal Grange, near Duxford, Cambridgeshire, is a great place to have a look at the options.

Should you go wider? Should you look at the pros and cons of going down the controlled traffic route? Is a power harrow-drill combi still the safest option in tough or damp conditions? Or maybe you should just stick with what you have and save some money?

These options, and many other ones like them, can start a helpful conversation between family members. To help you get in the mood, Peter Hill has looked at a selection of new kit items that will be at the show.

See also: Read all the latest news from Cereals

Brocks Wheel & Tyre claims a first in producing an adjustable wheel rim rated to 65km/hour for use on tractors.

At present, tractors capable of running at 50kph and more have been limited to using fixed rims built to handle the increased loading and multi-directional stresses imposed on wheels and tyres at such speeds.

However, Brocks says its BWT design is very strong thanks to high-grade steel with precision-machined holes and a 15mm thick centre secured to the rim by a dozen extra-strong bolts.

A crop store ventilation system being introduced by Evans & Pearce could save up to 40% in electricity costs by controlling fans on a differential temperature basis to optimise use of favourable ambient air conditions. 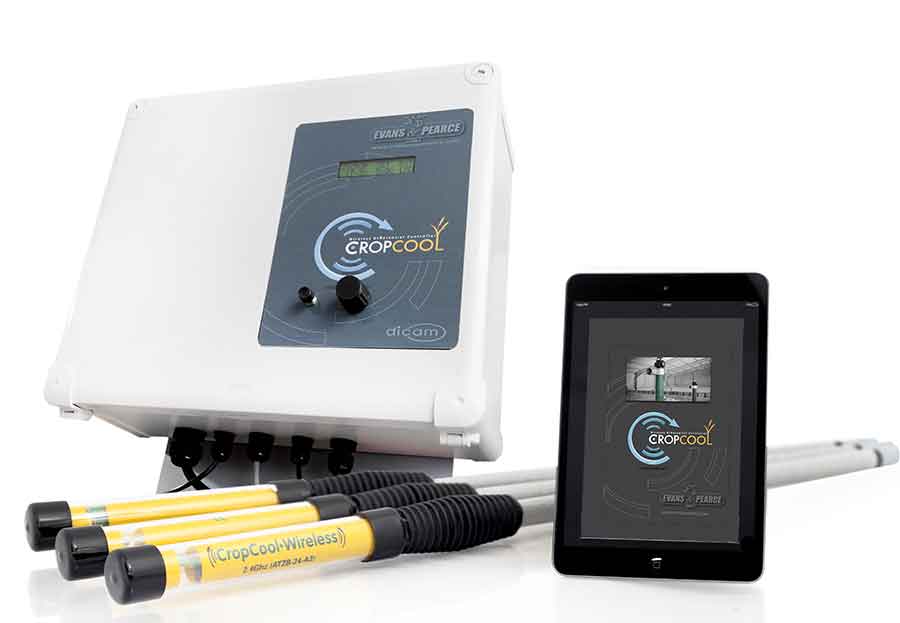 Another feature of CropCool Wireless is that its modular structure can grow from a basic monitoring package to a full-blown store control and crop data logging system in line with budgets and expectations, says the company.

For auto cooling, the system uses wireless temperature probes to feed information to a controller that switches ventilation fans on and off according to temperature and/or humidity. Early autumn ambient conditions are usually most favourable between 2am and 6am.

The Horsch Avatar SD will make its first appearance in final production form, using components such as the hopper and metering system – from the company’s Pronto DC seed drills – to create a single-disc coulter drill robust enough for sowing direct into stubbles as well as into worked seed-beds. 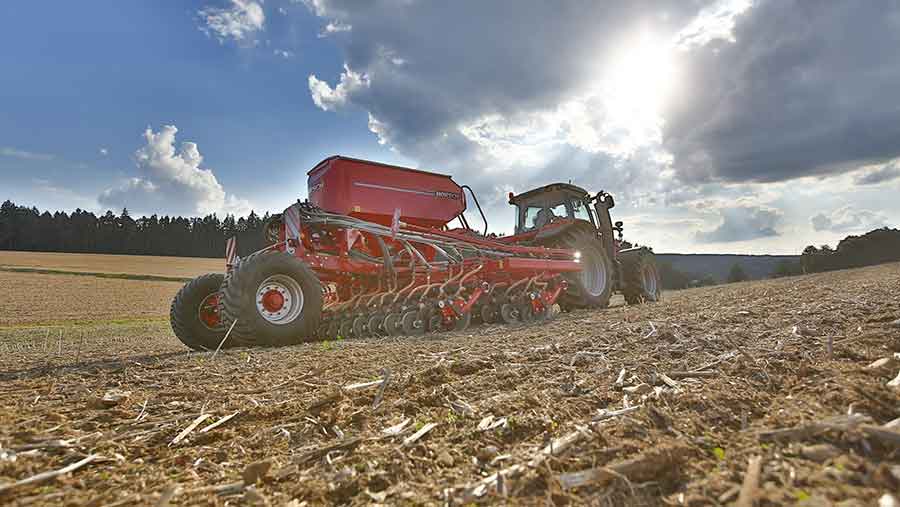 The single-disc opener operates with a side-mounted rubber depth wheel and is carried on a trailing coulter arm along with a press wheel and covering disc.

A coulter frame designed to eliminate sideways movement and up to 220kg pressure should help maintain consistent sowing depth, says Horsch, but an optional weight pack adding 1,400kg to the 6m machine and 1,800kg to the 8m version is available for very heavy soils.

A novel trailer that unloads using a roll-up conveyor will be unveiled by Joskin on its first Cereals stand, promising low-damage discharge of vulnerable crops such as sugar beet, potatoes and other vegetables. 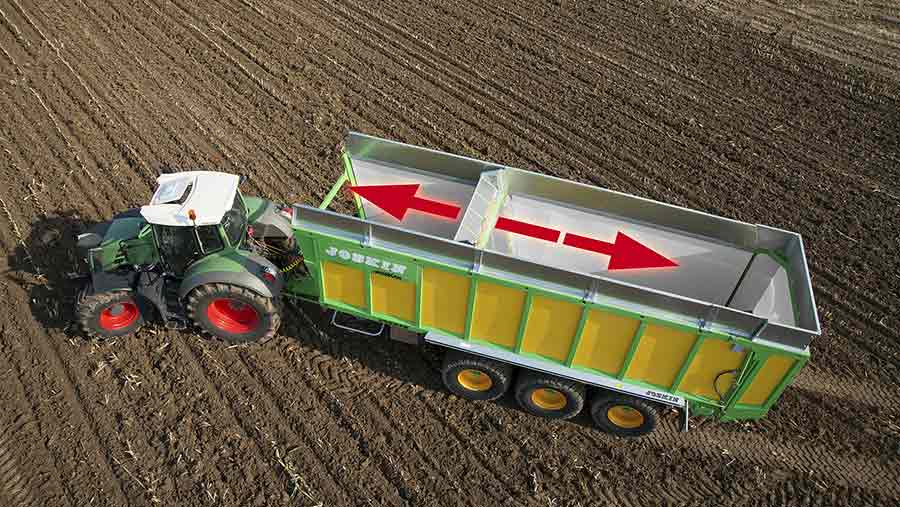 Using a conveyor mechanism also means the Drakkar can discharge where limited height overhead makes it difficult to empty a tipping trailer and do so safely on uneven ground.

Push-off and walking floor trailers have the same attraction, but unlike these options, says Joskin, the conveyor approach does not compress the load to any extent.

A tracks option for the Massey Ferguson Centora straw walker and Delta rotary separation combines will make its UK debut on a 9380 Delta with uprated grain handling system.

The MF Atrak assembly comprises a heavy-duty rubber traction belt wrapped around a track frame with four rollers positioned between the front and rear idlers to maintain maximum belt contact with the soil surface. 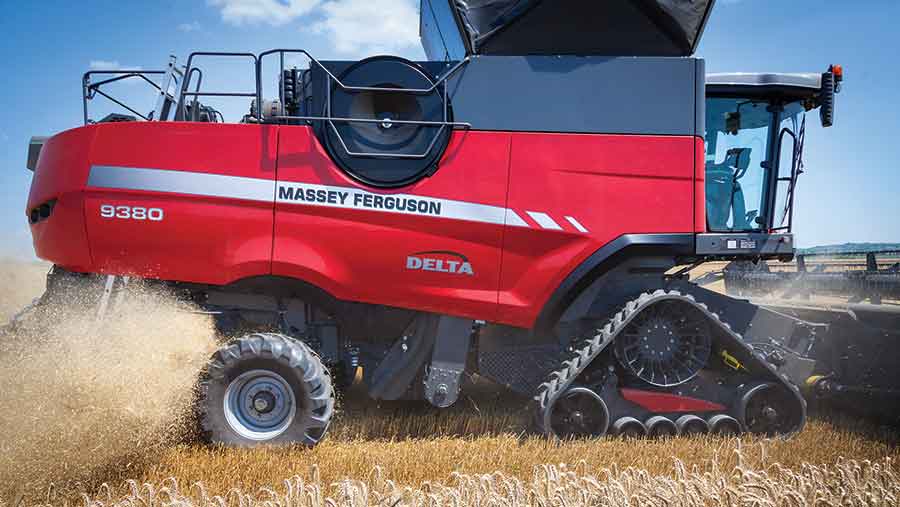 The combine itself has a new returns system and a clean grain elevator with 50% more capacity to help give the 496hp Delta combine’s output a lift.

The uprated elevating auger fills a 12,500-litre grain tank on regular versions of the Delta or a 10,500-litre tank on the chassis-levelling AutoLevel version.

The Select package devised by Mzuri for easily switching crop row spacing on the Pro-Til seed drill will be seen on the largest model for the first time.

Already available as an option on the 3m and 4m trailed machines, Select becomes the standard set-up for the 6m Pro-Til 6T, which is available only in seed/fertiliser format. 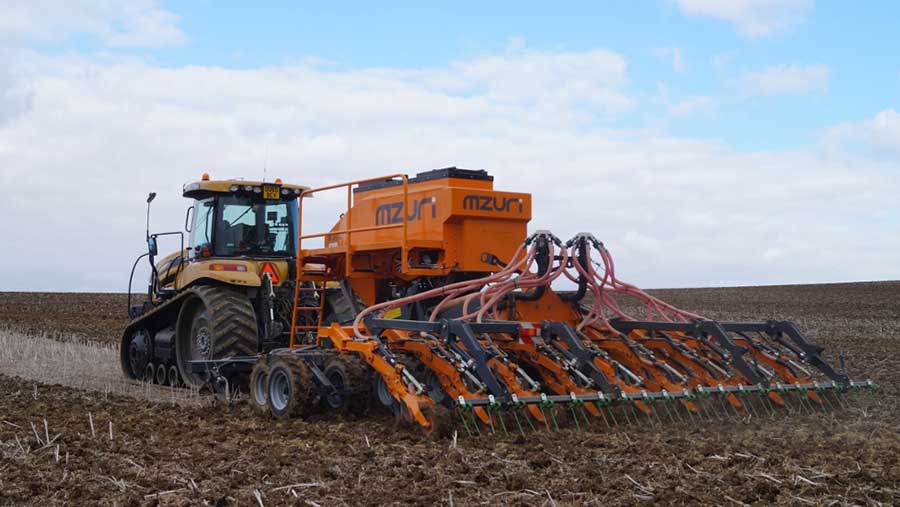 Select uses hydraulic break-back mechanisms to lift alternate leading tines and seed coulters out of work to switch from the standard 353mm, 17-row spacing to eight rows at 706mm for oilseed rape, cover crops and maize.

A front-mounted press re-engineered to make it more compact will be shown by Cousins of Emneth.

Taking 175mm out of the main frame and shortening the headstock assembly reduces the load on the tractor’s front linkage and front axle and should make the outfit more manoeuvrable and easier to handle. 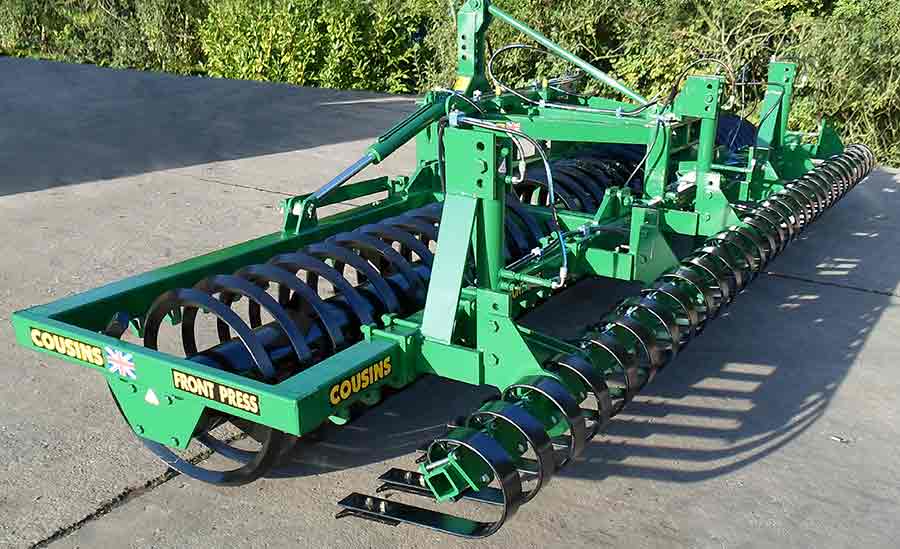 The Cousins Front Press is available in multiple widths from 1.5m to 6m, with hydraulic folding on larger models, and a choice of cast rings, Spiroller coils, Razor Ring pressed steel rings and tooth packers.

A following harrow with hydraulic adjustment and the option to use one or two rows of tines or take the tool out of work altogether is being introduced by Dale Drills.

Creating a more level surface after the drill should result in more consistent consolidation when seed-beds are rolled after drilling, while also eliminating clumps of crop residues that can harbour slugs. 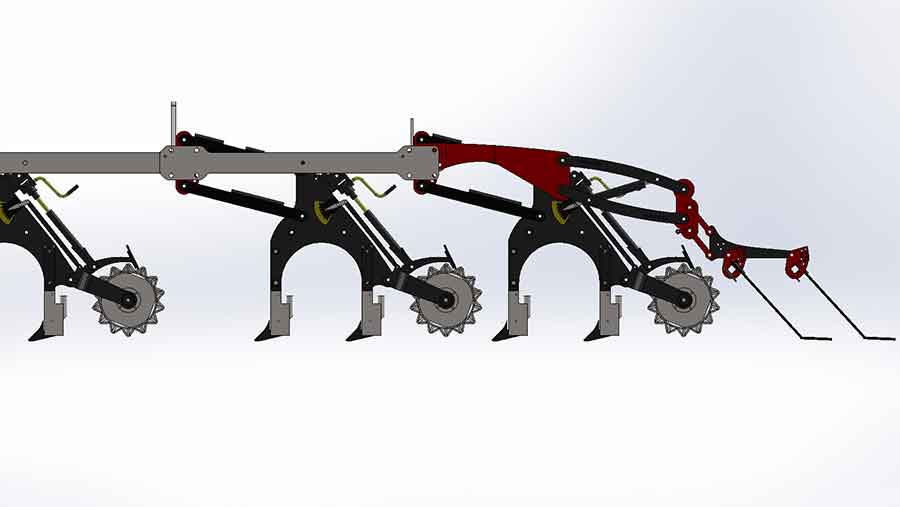 Being introduced at the same time is a lower-link arm-mounted drawbar for improved manoeuvrability and a deeper-working tine coulter option to enhance the versatility of Dale’s 3m to 8m Eco-M and 8m to 12m Eco-XL drills in handling direct, min-till or conventional seed-bed sowing.

A range of power harrows with taper bearings for the rotors and a stone protection system claimed to be unique will be unveiled by Weaving Machinery following its appointment as distributor for Breviglieri. 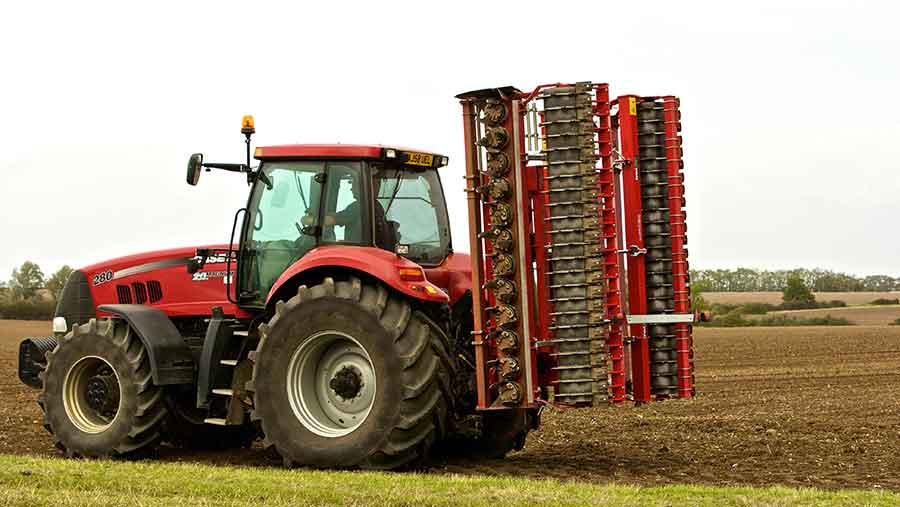 The Italian company has been acquired by the owners of Agrimaster, a manufacturer of linkage-mounted and reach arm flail mowers. These are distributed by Weaving, so the Worcs company was the logical choice to take over the Brevi range after former importer Reco closed earlier this year.

The 3m MekFarmer 230T power harrow will be shown in combination with Weaving’s own Tine Combi Drill, as well as a larger folding model from the 1m to 8m, 50-450hp line-up.

Toolbar versions of the Sumo DTS and DD drills will be shown for the first time, highlighting the potential to run two different drills at the lowest cost using a tractor front-mounted hopper and metering/distribution system.

While the DD is designed as an ultra-low-disturbance disc drill for zero-till and minimum tillage with the ability to work in heavy residues and cover crops, the DTS is a strip-till tine drill that uses a series of soil-engaging elements to create a straw-free tilth in strips.

Both toolbar drills are available in 3m rigid and 4m folding versions, with 187.5mm and 200mm row spacings, respectively, for the DD, while the DTS sows 150mm bands at 333mm spacing.

A five-row heavy spring tine cultivator for stubble and secondary cultivation being introduced by TRP Imports is available with three tine designs and spacings to suit different soil types and cropping situations.

Well-controlled working depth is claimed for the Carré Penterra as a result of pairing front support wheels with a twin U-profile steel rollers, to create 2-3cm deep stale seed-beds at typical working speeds of about 12kph.

The semi-mounted version is pulled on a lower linkage drawbar, but a conventional trailed format is available for the 3m, 3.5m and 4m rigid, and 4m to 7m folding implements.

A smaller Spirit drill a revised design shared with the 4m model and revamped Rapid seed drills will be exhibited for the first time by Väderstad, along with new capacity-increasing options for the Tempo precision seeder. 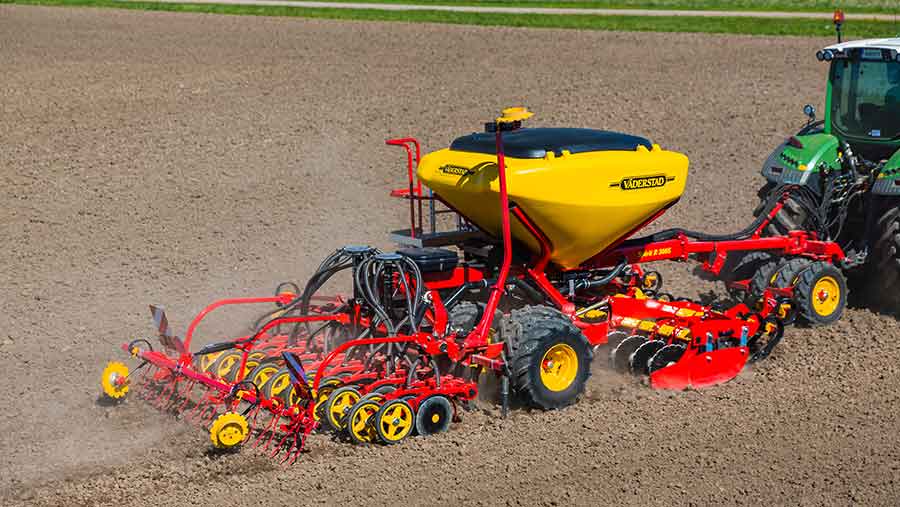 Final cultivation is by two rows of discs mounted on a central beam chassis, with a choice of paddle levelling tines preceding them if required, followed by packer tyres, 380mm offset V-disc openers, press wheels and a covering harrow.