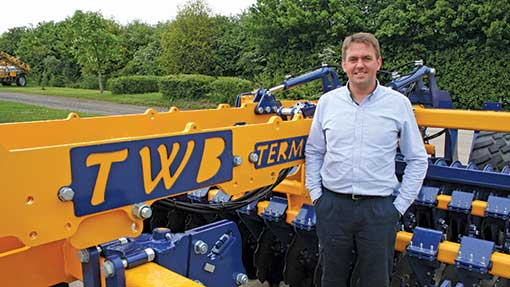 The blue and yellow colours of an eastern counties implement manufacturer who wants to supply cultivation products further afield will be seen on the working plots at the Cereals event for the first time this year.

Together with the first working demonstration of strip cultivation alongside a variety of conventional tillage tools, the working area should be a major draw for farmers at the event.

“With increasing demand for good-quality deep tillage and drainage products, we felt the time was right to raise the profile of the TWB range,” says Peter Gilder of J Brock & Sons (pictured above). “And with the event being held only 15 miles from our base at Thaxted, this year’s event was too good an opportunity to miss.”

The implements are designed and manufactured in Lincolnshire by Terry Birch, a farmer’s son who sets out to build strong and capable equipment that is easy to use and suits both high-horsepower tractors and current tillage practices.

“The new Magic Mole range sold particularly well after its introduction early last year,” says Peter Gilder. “Given the weather during the past 18 months, it was the right product at the right time.”

There are single-leg mounted and trailed versions, and a heavyweight twin-leg trailed model needing upwards of 350hp to pull it through the type of soils suited to moling for channeling water to pipe drain systems.

Shims adjust leg angle, pin and holes the working depth; mounted models have a sliding top link and the trailed version has floating beams to avoid carrying the weight of the substantial mounting frame.

Subsoilers are available in mounted sizes from 3-4.5m with up to seven legs and there is a trailed version of the largest of those sizes, plus a 6m version with nine or 11 legs. Rigid tines ahead of the heavy-duty tooth packer or shouldered ring packer are standard for full-width surface cultivation to alleviate compaction and break up sub-surface pans.

In addition to working a subsoiler on the Cereals event plot, Mr Gilder plans to demonstrate a 3.25m Terminator (pictured below), a stubble-busting cultivator with variations on a familiar theme. Changes to the chassis of the latest version make it a relatively easy job to mount its subsoiling tines ahead of or behind the two rows of discs. 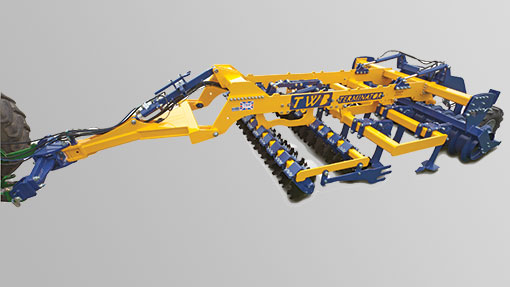 “It’s not necessarily something you’d want to do in season, but certainly year to year to take account of different weather and ground conditions,” says Mr Gilder.

In the standard format, the 500mm cutaway discs are lifted and lowered by hydraulic cylinder and pitch is adjustable to set the second row deeper or to compensate for the faster wear the leading discs tend to suffer.

Swivelling subsoiling legs are standard (as on the dedicated subsoilers) and come with a novel shear collar that simply drops in place over lugs on top of the leg and mounting frame. The low draft tines have a one-piece point and wings with three-position angle adjustment, and a separate replaceable leg shin.

A shouldered ringpacker – which can be specified to suit different soils – consolidates the resulting tilth.

Strip tillage – primarily for oilseed rape and maize – will be demonstrated for the first time following a successful static showing of the Sly Stripcat Pictured below) last year. 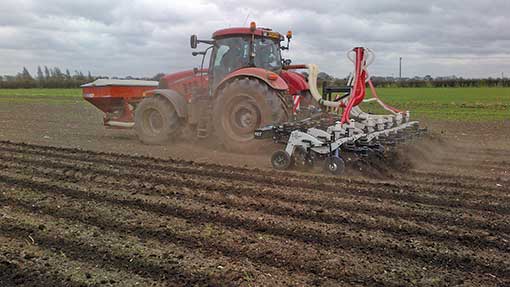 Like other implements of its ilk, the Stripcat uses several different assemblies to create seed-bed strips with the option to place fertiliser and sow seed at the same time.

“We now have some units working commercially on farms and a lot of interest is being shown by growers in the technique of cultivating only where necessary,” says George Sly.

“We’ve developed the European Stripcat range further, with wider versions in a trailed format – we’ve already supplied a 9m unit and a 12m version is heading to an overseas customer.”

A wavy-edge disc starts the cultivation process, its working depth being regulated by two generous polyurethane wheels positioned alongside that also trap and hold material to help the disc cut through.

Aggressively angled and profiled trash-clearing discs from US manufacturer Sunco come next; they are slightly offset from each other to be sure of working the entire width of the strip.

Spring tension, adjusted by pin and holes on the disc mounting leg, keeps them in contact with the field surface, while also providing break-back deflection over large stones.

A chisel tine follows, set deep enough to encourage drainage and rooting, and there are two discs either side to prevent soil from being thrown beyond the strip. They are adjustable forwards and backwards, up and down, and for angle to get the right set-up for different soils and working speeds.

A crumbler wheel then crushes any clods and consolidates the seed-bed strip. Oilseed rape can be sown from a simple broadcaster or maize planted in a separate operation requiring high-accuracy GPS.

A pair of plastic press wheels completes the separate sowing assembly, which is allowed free pivoting movement where it is attached to the strip tilling assembly to follow humps and dips in the field surface.

The entire tilling and sowing assembly can pivot from the pin that attaches it to the main frame arm, with a pneumatic “spring” positioned between the frame and assembly providing down pressure.

This is a new departure for the Stripcat, since previous versions have hydraulic cylinders for pressure control. All the rubber spring units are connected to each other to maintain even pressure across the implement, with adjustment available on the move using an in-cab control box.

Other manufacturers with working plots include Quivogne, demonstrating the Pluton disc, tines and press cultivator and Saturn angled-leg subsoiler, and maybe the new Beaver stubble harrow for spreading chaff, giving slugs a headache and encouraging seeds to chit.

Dowdeswell Engineering and Gregoire Besson will uphold conventional primary cultivation with a modern twist by working in-furrow or on-land ploughs.

“The 145-series reversible is proving our best-seller at the moment because farmers like the versatility of being able to plough out of the furrow when possible to avoid compaction,” says Richard Hicks of Dowdeswell. “It also makes use of a tracked tractor when available, and the 145-series has a big offset which makes it less likely for the tractor to slip into the furrow.”

Gregoire Besson plans to operate the new HRWC8 in-furrow/on-land plough: “It’s a lighter-weight implement than the current HRW9, suited to large-wheeled tractors,” says Robin Immink of Gregoire Besson. “We’ll probably have it on a Fastrac 8000 because we’re sharing the plot with JCB, who will also provide a tractor for our new Solis disc-tine-disc cultivator, a lighter-duty alternative to the Discordon.”

The new Crossland chisel tine and Tetra seed-bed cultivators may also get a turn on the plot, along with the Rabe Carry-Bret disc-tine-disc cultivators. Sumo’s interpretation of a stubble-busting one-pass cultivator – the four-element Quatro – will also be in action. 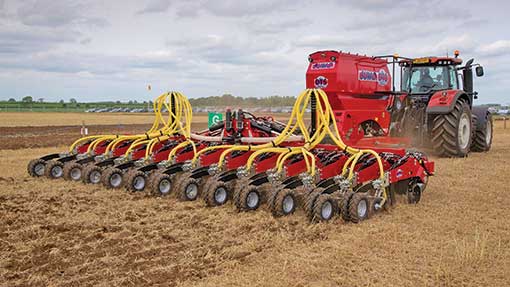 Available in 4m, 5m and 6m trailed sizes, the Quatro deploys two rows of discs, low-draft tines to work below the seed zone, a set of mixing discs and finally a 609mm diameter Multipacka consolidating tool to round things off.Strip seeding drills will also be in focus, with Sumo planning to turn out its Deep Tillage Seeder (pictured above) in new grain and fertiliser guise to suit growers wanting to give crops the earliest possible access to a nutrient boost.

Individually mounted seeding units articulate with ground contours and are governed by a hydraulic constant pressure system to produce a consistent tilled strip into which seed is sown in rows or bands.

Mzuri’s Pro-Til 3-4m strip tillage drill (pictured below) gets a demo plot outing to show the effect of its tine, consolidating tyre, wing coulter and press wheel configuration – and with the prospect of something new that is being kept under wraps for the time being. 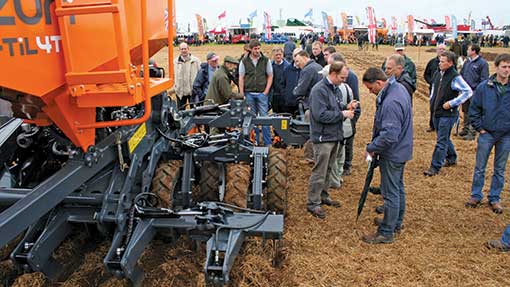 George Moate’s plot will focus on potato land preparation – the Tillerstar will complete the work of up to three machines in one go.“Its upward cutting horizontal rotor can work directly into stubble, after subsoiling or after ploughing if that is needed to help wet land dry out,” says Lesley Pratt. “Soil thrown from the hood is sieved by four finger rollers, with stones and persistent clods carried forward to be deposited just behind the cultivating rotor.”

As the machine continues forward, soil passing through the rollers covers the stone, which lies distributed across the full width of the bed rather than in rows – a positive aspect for farms letting land for potatoes. Bed-forming bodies or hoods complete the one-pass operation ready for planting.

See all the latest news from Cereals 2014