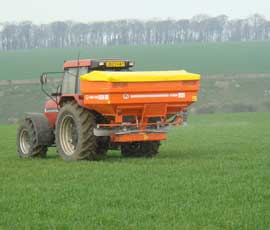 North Yorkshire firm Ryetec is the latest company to enter the increasingly popular weigh-cell fertiliser spreader market. It is to start bringing in Italian-made Agrex spreaders, which include the Kylo 2.5t and 3t-capacity machines.

Agrex has been making spreaders for 20 years, says Ryetec’s Mark Harrison, and produced 18,000 units last year. Ryetec has been testing machines in the UK this spring and reckons the £13,500 3t mounted machine could appeal to farmers wanting to improve the accuracy of the job.

Maximum spread width is 32m and the unit weighs the load in the hopper six times a second. That information is then used to adjust the flow of material to the spreading discs to give accurate application rates, irrespective of forward speed.

There’s wide use of stainless steel on the machines, says Mr Harrison, including the hopper bottom. Drop point and vane adjustment can be done without tools and there’s a hydraulically-controlled headland border deflector.

The 3t machine can be seen for the first time in the UK at this year’s Cereals 2012 at Boothby Graffoe, Lincolnshire.