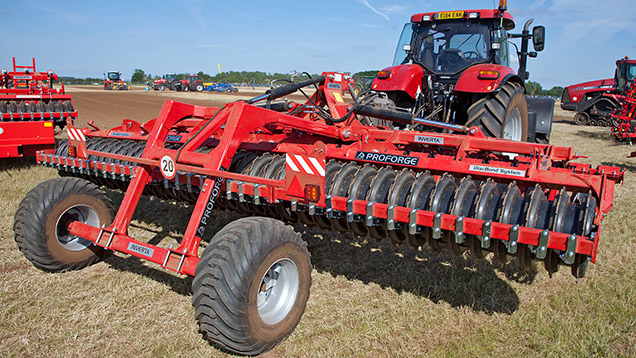 G Whyles and Son has been selling second-hand kit under the tradename of Agri-Linc at Bourne, Lincolnshire, since 1924 and specialises in cultivations equipment. However, it started diversifying in 2012 with a range of Proforge mole-drainers and now has quite a selection of equipment.

Read all the latest news and reviews from Cereals 2015

All machines can be mounted or trailed. Discs, meanwhile, are big 560mm cutaway types and there is a choice of Discbond packer or rubber wedge packer. Front hydraulic levelling boards are available. Price of a 6m unit is £18,450 and there is also a 3m disc and tine Disrupta model and 3m or 4m Drillmate model.

Sumo Multipress can cope with most conditions

Yorkshire firm Sumo was showing its Multipress cultivator. This tool is designed to do a level job and press the ground in a wide range of conditions.

Heavy-duty spring-loaded auto-reset tines work from 25mm down to 250mm. They are fitted with wide 310mm quick-fit points to give a good mix on stubble cultivation tasks, but you can also have a narrow point on plough.

Hydraulically adjustable levelling paddles run the full width of the machine to crack clods and get a level, fine tilth and a 609mm Multipacka does the consolidating and crushes the clods.

Worcestershire farmer Jim Bullock has become well known for his range of slug pellet applicators for drills and quad bikes over the past three years. However, the new item on his stand at Cereals was a 3m disc cultivator from Poland.

Mr Bullock says he spent three years looking for a cultivator that was up to the job and the DH harrow range was the result of his toils. Two rows of 560mm serrated concave discs do most of the hard work. Each unit is individually mounted to the frame by six bolts and four rubber shock absorbers.

A Lincolnshire engineering firm has built a novel strip-till cultivator that uses a series of narrow rototillers to create a finer seed-bed.

Spalding-based AT Concepts came up with the idea to help farmers create a decent tilth in soils where standard strip-till drills struggle. The theory is that the strip-till leg opens the ground up to a depth of 20-25cm and the rototiller creates a shallower fine tilth on the top to give good seed-to-soil contact.

The Strip Rota Till started life as a standard US-built Blu-Jet cultivator and then had individual rototiller units mounted behind each leg. These are mounted off the front frame and are driven by a single hydraulic motor.

Seed delivery is then handled by a precision seeder of the owner’s choice that can be hung off a three-point linkage at the rear. So far, AT Concepts has used the tool for establishing maize and oilseed rape, but it should be suitable for sugar beet and some vegetable crops.

Row spacings can be anything from 35- 75cm and it can accommodate a maximum of 12 rows. Liquid or granular fertiliser applicators can also be added.

Prices vary according to spec and the number of rows fitted. The machine on show at Cereals 2015 had a list price of £45,000.

TWB Eliminator was built to order for Northants farmers

There was a new and characteristically heavy-duty cultivator thundering up TWB’s section of the Cereals event working plots.

Called the Eliminator, it was built to order for Nottinghamshire farmers Rob and Dave Gash –featured in Farmers Weekly’s Farm Inventions competition – to help tackle their burgeoning blackgrass problem.

It is basically a heavy set of trailed discs that are designed to travel at speed and move enough of the farm’s heavy soil to get weed seeds to germinate.

At the front it has a twin-row disc unit that can be tilted so the rear set works slightly deeper than the front set. That will create  a decent enough gap for the soil to settle before the rear packer roller comes along to consolidate it.

TWB has also neatly used this gap to house the transport wheels. This helps reduce overall length and keeps more weight on the machine for better ground penetration.

This first Eliminator has been built as a 6m folding machine and Mr Gash reckons his Case Puma 180, which is chipped to 230hp, should be up to the job. Price is £20,000 for the 6m model. Various other sizes are available to order.

Taking pride of place at the corner of the Opico stand was He-Va’s first attempt at a trailed subsoiler.

The 5m folding machine on show had enough space to accommodate nine legs in a V-formation and according to He-Va should need a minimum of 400hp on the front.

To help keep it compact for tighter headland turns and narrow on the road, the wheels have been neatly slotted into the middle of the rig.

Various leg options are available as well as fertiliser applicators, a small-seeds seeder unit as well as a set of disc coulters for more accurate seed placement.

Evesham firm Twose had a neatly folded set of 18m Cambridge rolls taking up a sizable corner of its stand.

Built out of hefty 10mm box section and using chunky 65mm shafts inside each roller, they have been designed to withstand the rigours of being dragged over thousands of acres with a couple of hundred horses on the front.

To keep the centre of gravity low and the width less than 3m, the slick folding mechanism tucks the rolls in alongside the drawbar, rather than lifting in the air.

The elaborate mechanism requires five spool valves to operate and you can get them into the work position without having to reverse. There are also stabilising bars to help stop the sizable wings flexing as they are moved.

The rolls come with a sprung drawbar as standard and the version with 22-inch rings costs £55,000.

A novel tool designed by a Bavarian farmer and imported by an Oxfordshire machinery dealer could help farmers in their battle against blackgrass.

The Heko Ringcutter is designed to aggressively chop and move soil, generating a tilth in hard-baked soils where straw harrows struggle to penetrate.

To do this it has three rows of rotating circular steel blades that slice and invert the soil as you drive along. To give an added shattering effect the blades are mounted on sprung steel legs that vibrate with forward motion.

The Ringcutter is designed to be driven at about 12kph, meaning pretty swift progress can be made, and a tractor with between 120hp and 140hp should be man enough to handle the 3m version. The larger 5m folding one needs nearer 200hp.

Built by Dutch manufacturer Tulip, the Polymat has always been designed to be simple, reliable and reasonably priced. But the latest version has had a few upgrades to bring it up to date.

These include giving it a pressed steel frame rather than a box section one, which reduces weight. This has meant the engineers have been able to up hopper capacity from 800 litres to 1,100 litres and there is even an optional extension to push this up to 1,600 litres. A neater roll-up cover should also help improve filling access.

There have been quite a few upgrades in the electronics department, too. This means even the most basic control box has a touch-screen and is compatible with GPS and Isobus.

The Polymat is available in 3m and 4m working widths, with Suffolk or double-disc coulters. Starting price for the 3m drill is £18,600 including following harrow and centre markers. Pre-emergence markers are the only optional extra.

Agrisem’s Maximulch is a hefty looking disc and subsoiler combination that has the subsoiler legs sandwiched between the two rows of discs. Agrisem says this helps make the rig compact. It has also mounted the transport wheels in front of the rear packer for this reason.

Unlike a lot of cultivators of this type, Argisem has opted to mount the discs on heavy-duty sprung pigtail springs, rather than rubber mounts. The theory behind this is that it causes the discs to vibrate and penetrate better.

The auto-reset system on the subsoiler legs is also a bit different, as Agrisem has fitted massive coil springs, rather than a more complicated accumulator system. Depth adjustment is hydraulic and the legs can be easily folded out of work.

At the headlands the Maximulch is designed to lift in parallel using the rams on the transport wheels and drawbar.