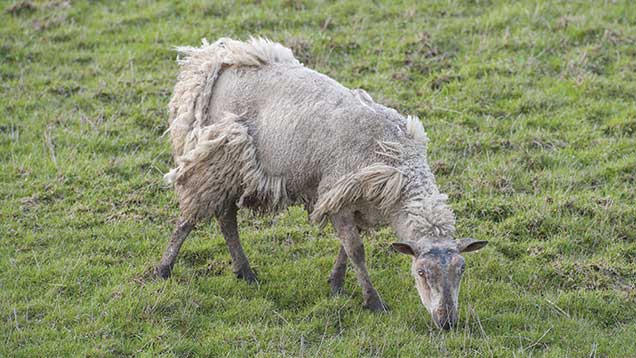 A collaborative approach to controlling sheep scab in the north-east of England led to no cases of the disease for three years.

Addressing a sheep health seminar, Joe Henry of Alnorthumbria Vets said it proved what could be achieved when there was a concerted effort from neighbouring farmers.

“The problem with scab is diagnosis and stigma. Not all itchy sheep have scab, but that doesn’t mean itchy sheep should be ignored and neither should farmers feel that identifying scab in their flocks reflects badly on them. The stigma comes when it is not dealt with properly.”

Mr Henry said a scab outbreak could not be treated on its own. “No farm is an island when it comes to scab. If one farm has the disease, the neighbours will have it too, but they probably can’t see it. This is a disease where every single scab mite in an infected flock has to be killed – if not, the disease will return.”

“No farm is an island when it comes to scab. If one farm has the disease, the neighbours will have it too.”
Joe Henry, Alnorthumbria Vets

“Vets aren’t allowed to inform neighbouring farms of an outbreak, so it is up to the famers themselves to mount a co-operative operation to get on top of an outbreak. It can cost about £1 a ewe to treat scab, but if it is ignored there are severe financial implications for the flock.”

Moredun Research Institute vet Beth Wells said the diagnostic blood test they had developed to identify sheep scab would soon be available commercially to sheep producers. The test is currently free, although farmers will have to pay their vet to carry it out.

“Sheep scab is still one of the top five sheep diseases in Scotland in terms of its financial and welfare implications. And because of the problems associated with both dipping and injectable treatments to cope with scab, we have to look at alternative approaches rather than substitute treatments,” said Ms Wells.

She told producers that identification of scab was still a major hurdle which often led farmers to assuming a ewe was suffering from wool slip and nothing more.

“Positive diagnosis by eye isn’t always possible, so it is important to bring in the vet and treat as required. Moredun has spent 10 years developing the scab test, which is a treatment based on finding antibodies to tackle the scab mite.”

Ms Wells said the test could be used during a scab outbreak to overcome the problems of positive diagnosis because mites can’t always be found when skin scrapes are taken. The test could also be used where there is a new infestation and the disease is sub-clinical.

“And it can be used to screen sheep and in particular to identify immune animals that carry sheep mites and are a reservoir of infection in the flock. Up to 60% of a flock can be infected with scab before the vet is called in, so the test has an important role to play in screening for the disease.”